Is this the end of the A-68A iceberg?

Satellite images reveal that the once colossal A-68A iceberg has broken into multiple pieces. 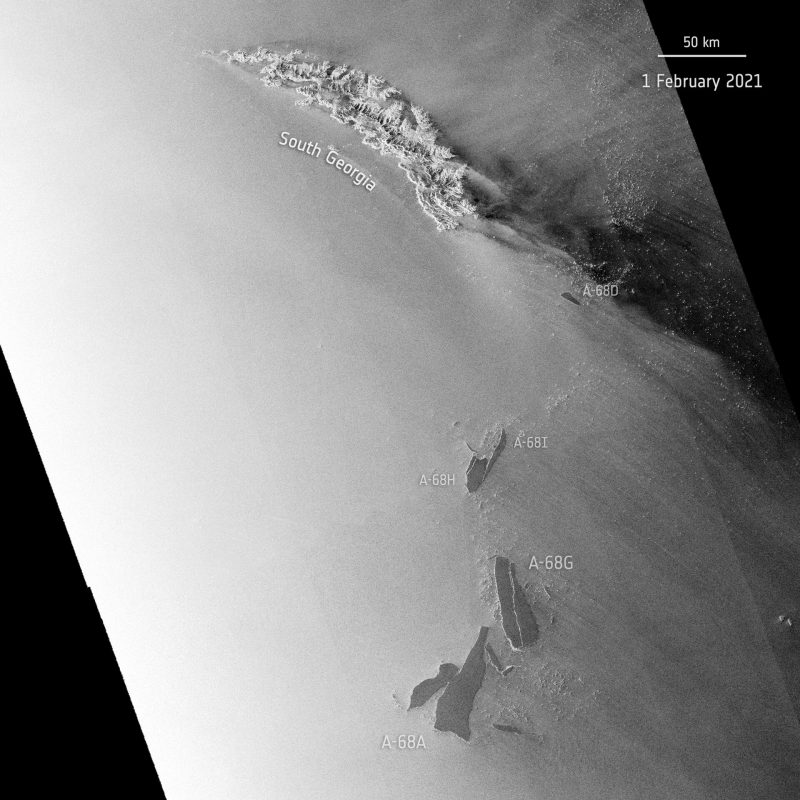 View larger. | Here’s a look at A-68A on February 1, 2021. Satellite images from the end of January 2021 showed that a new iceberg calved from A-68A. The smaller slab, promptly named A-68G by the US National Ice Center, measures approximately 28 miles (45 km) in length and around 11 miles (18 km) at its widest point.Image via ESA.

Remember giant iceberg A-68A? Last fall (November 2020), the colossal Antarctic berg – the world’s largest – was on a collision course with South Georgia Island, a remote island in the southern Atlantic Ocean. By the end of 2020, a large piece of the iceberg had broken off, and more large cracks were spotted in the berg at the end of January 2021. The newest satellite images reveal that the once colossal iceberg has now broken into multiple pieces.

The main A-68A iceberg now measures only around 37 miles (60 km) in length, with a maximum width of about 14 miles (22 km). The icebergs in the group appear to be drifting apart. According to a February 3, 2021, report from the European Space Agency (ESA), scientists believe these little icebergs will travel away from the island and end A-68A’s threat to South Georgia.

One of the largest known icebergs of all time, A-68A broke off from Antarctica’s Larsen-C ice shelf in 2017. Satellite images have charted the progress of A-68A’s journey over the past three years, and scientists have closely monitored the iceberg over recent months as it veered dangerously close to South Georgia Island. They feared that the iceberg would anchor itself to the coast and damage the island’s fragile ecosystem, through the scraping of the seabed or the release of cold freshwater into the surrounding ocean.

EarthSky lunar calendars show the moon phase for every day in 2021. Only a few left. Get one while you can! 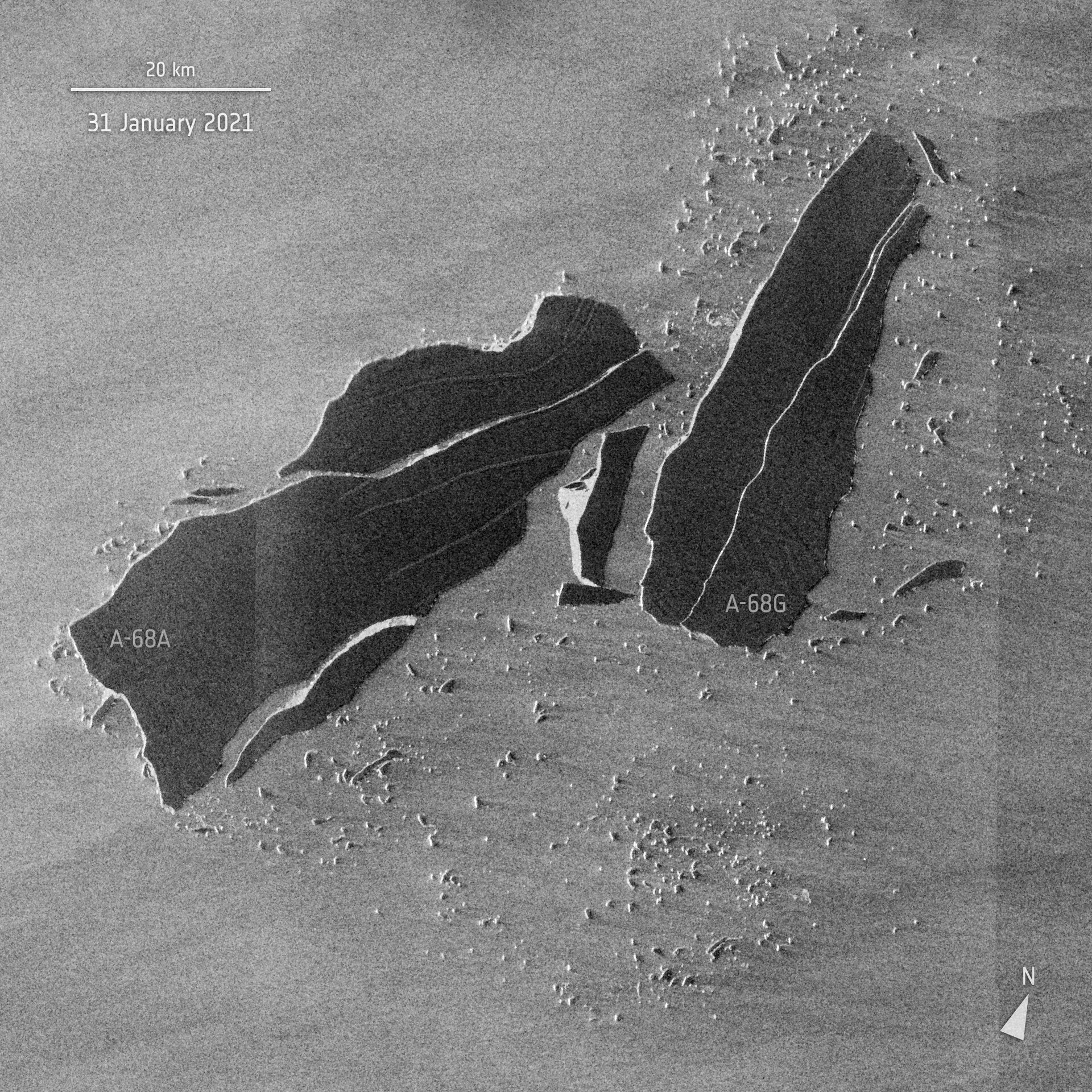 In December 2020, the iceberg changed direction, as ocean surface currents diverted it southeast away from the island. A-68A also lost a huge chunk of ice in the process. In January 2021, A-68A continued to crack apart. According to an ESA statement:

Latest data coming from the Copernicus Sentinel-1 radar mission shows the iceberg suffered further damage in 2021 as a new iceberg calved from A-68A just last week. The smaller slab, promptly named A-68G by the US National Ice Center, measures approximately 53 km [33 miles] in length and around 18 km [11 miles] at its widest point.

Soon after, a large crack developed where A-68G broke free, resulting in the almost-immediate calving of an additional two icebergs: A-68H – around 20 km [12 miles] in length and 9 km [5.5 miles] in width – and A-68I – around 30 km [19 miles] long and 5 km [3 miles] in width at its widest point. Antarctic icebergs are named from the Antarctic quadrant in which they were originally sighted, then a sequential number, then, if the iceberg breaks, a sequential letter.

The main A-68A iceberg, once the world’s largest, now measures only around 60 km [37 miles] in length with a maximum width of 22 km [13.6 miles]. The collective group of icebergs appear to be drifting apart, with the A-68H moving northwards, approximately 130 km from South Georgia. As of today, the main A-68A iceberg appears to be moving south and is currently around 225 km [140 miles] from South Georgia. This latest calving event could indicate that the bergs will most likely travel away from the island, no longer threatening the island’s wildlife. 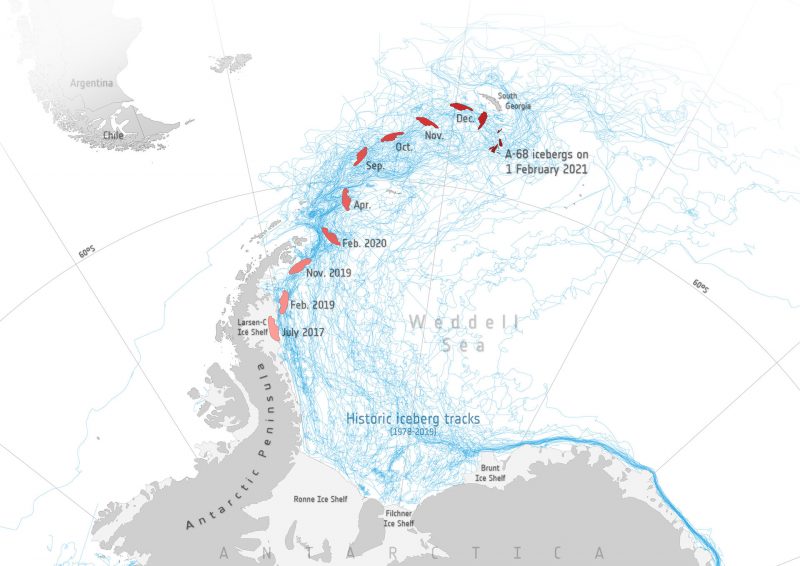 View larger. | This map shows the different positions of the berg over the course of its 3-year journey. The map highlights that during its first 2 years of freedom, A-68 drifted slowly, impeded by sea ice. But as it moved in relatively open waters, the pace of the iceberg increased significantly. The map also includes historic iceberg tracks, based on data from a number of satellites. Image via ESA. 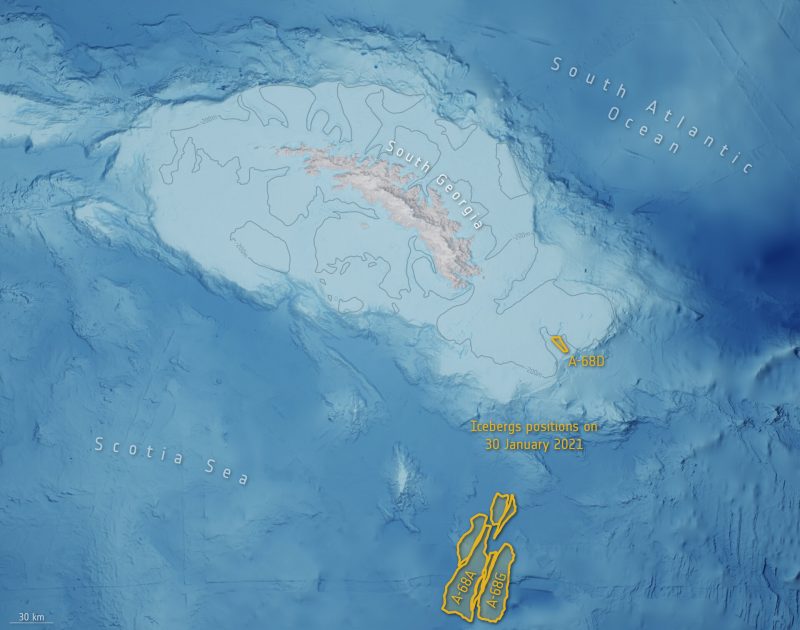 Bottom line: The newest satellite images from February 2021 reveal that the once-enormous iceberg A-68A has broken into multiple pieces. These little icebergs could indicate the end of A-68A’s threat to South Georgia Island.