The discovery of dozens of pregnant giant devil rays tangled in fishing nets in Mexico’s Gulf of California could mean the endangered species has an unknown birthing zone there, says a new study. 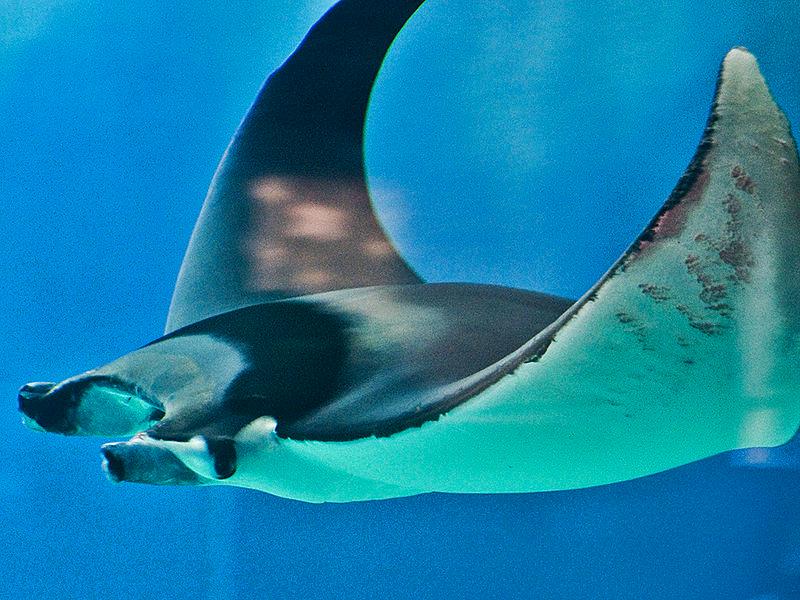 Giant devil rays can grow up to 17 feet (5.2 meters) long, but scientists still have spotty knowledge about their population size, movements and birthing zones. Image via Patrik Neckman, via Wikimedia Commons.

The discovery of dozens of pregnant giant devil rays accidentally caught in fishing nets in a village along Mexico’s northern Gulf of California could mean the endangered species has a previously-unknown birthing zone in nearby waters, a study suggests.

The largest of the ray species, giant devil rays (Mobula mobular) can grow to 17 feet (5.2 meters) long and are known for their acrobatic leaps and deep dives. Large numbers of them are caught and killed as accidental by-catch each year when they get entangled in fishing nets while foraging for krill and other prey in shallow tropical and subtropical waters.

Duke University doctoral student Leo Chan Gaskins is the author of the new study, which was published April 23, 2019, in the peer-reviewed journal Ecology. Gaskins said in a statement:

We still know very little about their global population size, annual movement patterns and reproductive zones, so the discovery and protection of a previously unknown pupping ground would be good news for conservation.

Past studies have shown that giant devil rays use the Gulf of California as a mating and feeding zone in spring and early summer, but the presence of a birthing zone there was unknown. Gaskins said:

It makes sense that a pupping zone would be in an area where food is plentiful. The highest density of these rays’ preferred prey, the krill Nyctiphanes simplex, occurs in the northern and central gulf in April.

Watch devil rays perform high jumps, twists, and belly flops, in this footage by the BBC. The reasons for the rays’ incredible acrobatics is still not well understood.

In April 2014, Gaskins observed dozens of dead giant devil rays tangled in gillnets on the beach of a small-scale fishing community on the Gulf of California in northern Sonora, Mexico. Because of the animals’ immense size and weight, the fishers were unable to return them to the sea and had been forced to land them. Gaskins said:

Every female ray being cut open was pregnant with one pup. I determined the pups were full-term since I was able to revive one that had just been born into a net. We set it free and it swam away over the breaking waves.

Measurements of the wing spans of two of the dead adult females and one of the dead pups confirmed his belief that the pups were full-term. He said:

These measurements, along with the fact that each boat landed multiple pregnant rays, suggested that the fishers had unknowingly set their nets in a pupping zone.

Knowing the locations and timing of the rays’ movements in the gulf as they head to and from the pupping grounds would help local fishers, fishery managers and conservation groups reduce the risk of bycatch, he said.

This would benefit the fishers and well as the fish. Aside from the obvious humane reasons the fishers have for not wanting to harm endangered animals, entangled rays can damage their nets, drive away the desired catch and greatly decrease their earnings. Ray meat is not valuable in the Gulf of California and only brings in about three pesos per kilo [2.2 pounds].

If further research confirms the birthing zone, said Gaskins, authorities and local fishers should work together to devise a plan that minimizes the risk of negative interactions when pregnant rays migrate there each April. He said:

These animals reach sexual maturity very slowly and they have only one pup per litter, so losing even a small number of pregnant females to bycatch can have dire effects on a local population’s birth potential and long-term survival.

Bottom line: A new study suggests that giant devil rays might have a previously-unknown birthing zone in Mexico’s Gulf of California.