Georgia tornado on January 30 ends stretch without a tornado death

The one death in Georgia ended the longest continuous stretch without a tornado death ever recorded in the United States at 219 days. 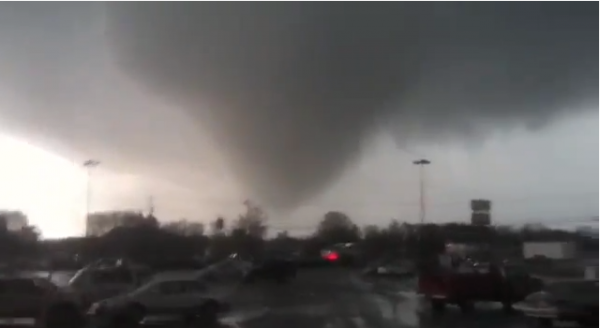 Youtube still image of the EF-3 tornado that pushed through Adairsville, Georgia on January 30, 2013.

On Wednesday, January 30, 2013, a strong cold front pushed through the eastern United States and triggered severe thunderstorms. Around 11:15 a.m. (local time) in Adairsville, Georgia, a supercell formed a strong EF-3 tornado that destroyed approximately 60 structures, damaged at least 95 structures, and killed one man. The one death in Georgia ended the longest continuous stretch without a tornado death ever recorded in the United States at 219 days. According to Dr. Jeff Masters of Weather Underground, the last death to occur in the U.S. was at Venus in Highlands County, Florida, from an EF-0 tornado that was associated with Tropical Storm Debby on June 24, 2012. In the case of the January 30 tornado, warnings were issued well in advance with a lead time of around 20 minutes. In this post, we will look at some incredible video that came from this strong tornado and look at the issues that occurred while these storms hit the southeast in the morning and early afternoon hours. 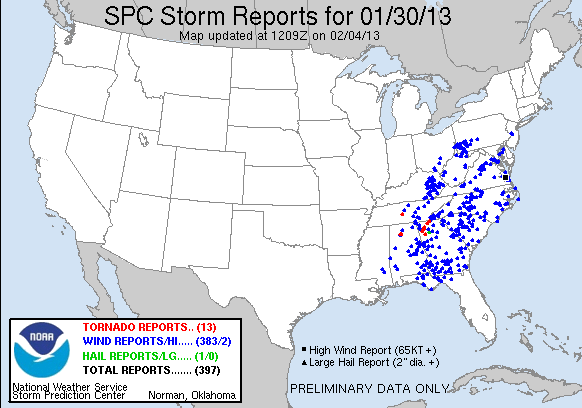 According to the Storm Prediction Center (SPC), there were 12 tornado reports, 383 wind reports, and one hail report that totaled in 397 preliminary storm reports for January 30, 2013. Prior to that day, even more active weather occurred across eastern Texas all the way north into Indiana as a total of 527 preliminary storm reports were recorded with 56 of those reports potentially caused by tornadoes. Warm air from the Gulf of Mexico allowed temperatures to climb into the low 70s in the U.S. Southeast. Meanwhile, a strong cold front was pushing temperatures that were in the 20s and 30s behind the system. The collision of these temperatures and the strong dynamics with the front was what triggered severe weather across the region. The forecast for this outbreak of severe weather was predicted days in advance. In fact, some of our most reliable models saw this setup seven days prior to the event. In summary, this event is another example of how our advances in science and meteorology have come a long way. 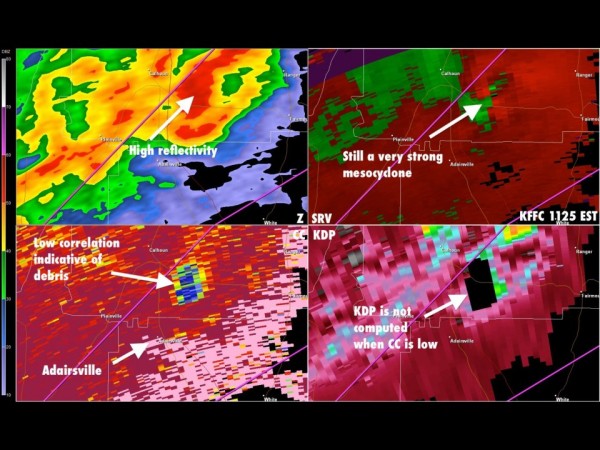 Dual polarization technology was able to help confirm that a tornado was on the ground when the EF-3 tornado hit Adairsville, Georgia on January 30, 2013. Image Credit: NWS/Steven Nelson

The tornado that struck Adairsville, Georgia was rated a high end EF-3 tornado with wind speeds estimated around 160 miles per hour. The path length of the tornado was estimated to be around 21.8 miles with a path width of 900 yards. The tornado injured 17 people and killed one man. The tornado formed at 11:12 a.m. EST and lasted until 11:43 a.m. EST. The National Weather Service issued a tornado warning for the supercell storm at 10:59 a.m. EST, nearly 20 minutes before the EF-3 tornado struck Adairsville. The tornado crossed Interstate 75 and tossed vehicles in the air. At the same time, 202 single homes and 66 mobile homes were damaged or destroyed. Had this tornado been rated an EF-4 tornado, it would have been the first EF-4 tornado ever recorded in the month of January in Georgia. The one death on January 30, 2013 ended the longest continuous stretch without a tornado death ever recorded in the U.S. of 219 days. The last death from a tornado occurred on June 24, 2012 by Tropical Storm Debby. The old record happened back in 1987 when we had 197 straight days without a tornado death. Science prevailed during this event by providing great warnings for the Atlanta area. Peachtree City had already upgraded their radar to dual polarization, which allowed them to see various angles of the storm and be able to determine whether or not a tornado was on the ground with this storm. On average, the lead time for this tornado was around 15-20 minutes. 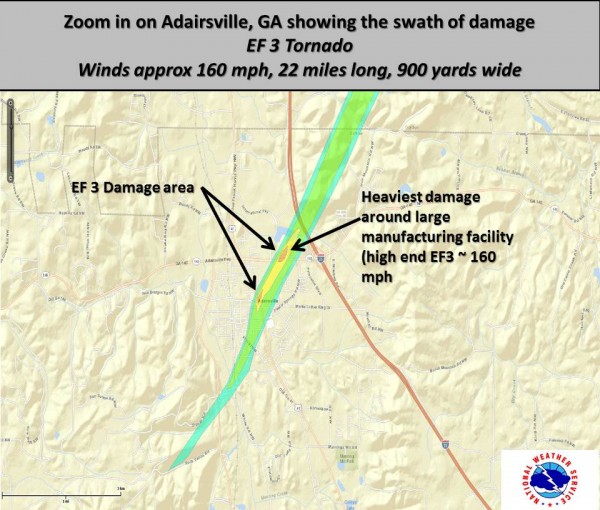 One of the most interesting aspect about the Adairsville tornado was that it occurred in the morning hours. Typically, severe weather strikes in the late afternoon and evening hours when the air is most unstable due to the heating of the day. However, the dynamics of this system allowed it to produce strong winds and tornadoes across the U.S. Southeast during the overnight and morning hours. Seeing temperatures in the upper 60s and low 70s in the overnight hours in the Southeast is highly unusual for January, when lows typically average in the mid to upper 30s. Since the timing of the storms was so early, there were confusion onto the idea of delaying schools or closing them early for the threat of severe weather. There were instances when parents thought it was a good idea to pick their student up at the school during the middle of the severe weather event. If severe weather is occurring, the best thing to do is to let the school handle the situation. They have a plan in place, and it is not a good idea to let the children ride in a car while the severe weather is occurring. Why is that? Take a look at this picture: 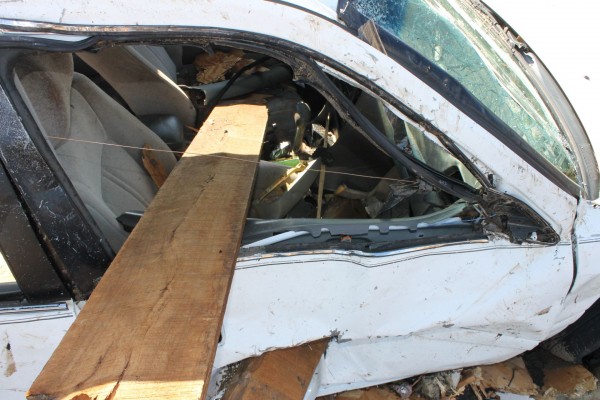 Never take shelter in a car during a tornado warning. Take a look at what happened to this car! Image Credit: NWS

The Adairsville tornado picked up at least 100 cars and threw them in the air as if they were toys as it hit a factory and crossed I-75. Parents picking up their child at school when a tornado threat is high and occurring is not a good idea. Always let the schools handle this situation! 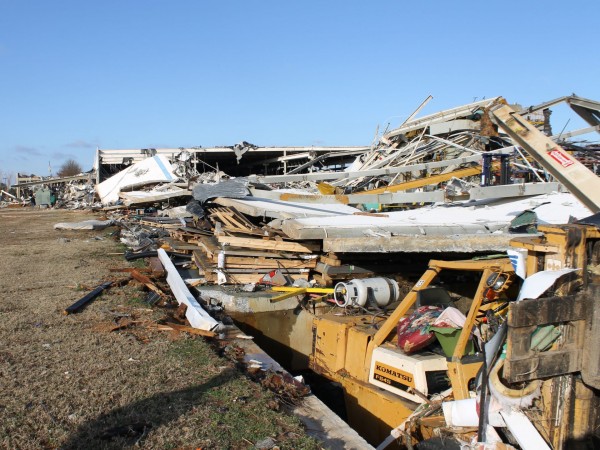 Bottom line: The EF-3 tornado that struck Adairsville, Georgia ended the longest continuous stretch without a tornado death ever recorded in the United States at 219 days. At least 100 cars were picked up and thrown from this tornado, and it is a miracle that we did not see numerous significant injuries and deaths. Models did an excellent job at seeing the overall setup of this severe weather outbreak across the Southeast a week in advance. If this tornado was rated an EF-4 tornado with winds over 165 mph, it would have been the first EF-4 tornado to strike the state of Georgia in the month of January.