From nuclear weapons to biowarfare to cyberattacks, humanity has much to overcome. Martin Rees and Frederick Lamb discuss the obstacles we must face as we look forward to humanity’s future on Earth. 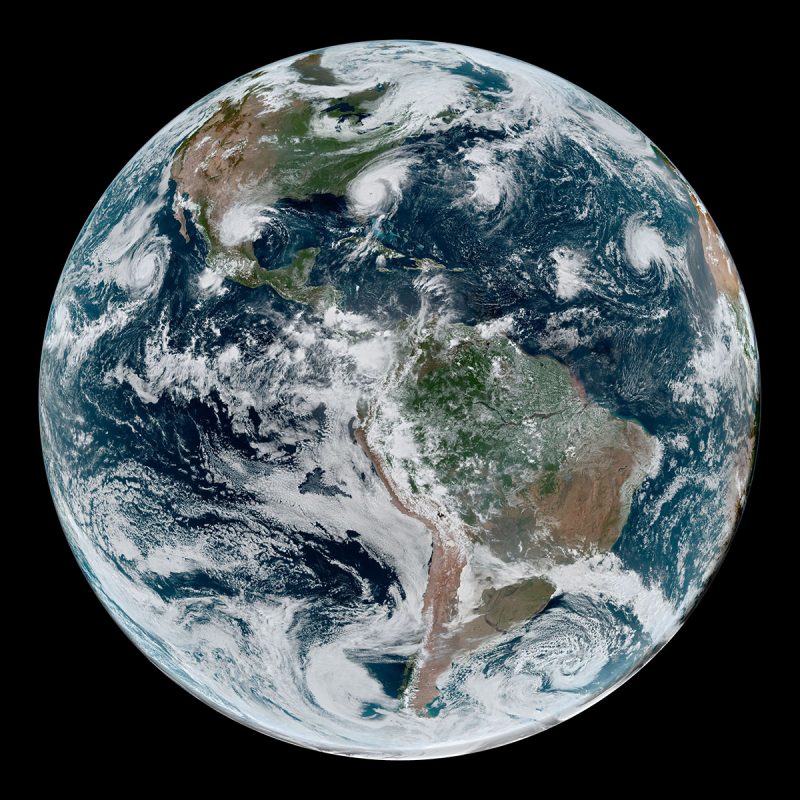 What is the fate of humanity – and other living creatures – on planet Earth? In the 21st century, we humans hold the key. Image via NASA.

The American Physical Society met virtually this week, and – on April 19, 2021, at a press gathering – the U.K.’s Astronomer Royal Martin Rees and astrophysicist Frederick Lamb discussed some of the serious obstacles humans must overcome, in order to move forward in this century. Rees commented:

Our Earth is 45 million centuries old. But this century is the first when one species – ours – can determine the biosphere’s fate.

Rees has been the Astronomer Royal since 1995 and has written a book titled On the Future: Prospects for Humanity. He is also the co-founder of the Centre for the Study of Existential Risk at the University of Cambridge. Lamb is an astrophysicist at the University of Illinois and a core faculty member in the Program on Arms Control, Disarmament and International Security.

Rees said that, through technology, we could improve the state of the Earth, or – through inaction on issues such as climate change and biodiversity loss, among other things – we could end this century with Earth in a much-degraded state for habitation by living things. Two of the great threats we face, according to Rees, are biological and cyber threats. The biological threats of natural pandemics spread globally in a way they never did before, as we have seen with Covid-19. But human-engineered pandemics and misuses of cybertechnology would be even worse nightmares, Rees said. He commented:

What really scares me is … it’s possible to make a bioweapon or cause a cyberattack with minimal equipment, standard equipment available to many people. I see the biggest challenge in the next 20 years is to ensure that doesn’t happen.

Rees also describes himself as “an optimist.” He believes humans can avoid the risks and achieve a sustainable future, better than the world we live in today. He said:

If all of us passengers on ‘spaceship Earth’ want to ensure that we leave it in better shape for future generations we need to promote wise deployment of new technologies, while minimizing the risk of pandemics, cyberthreats, and other global catastrophes. 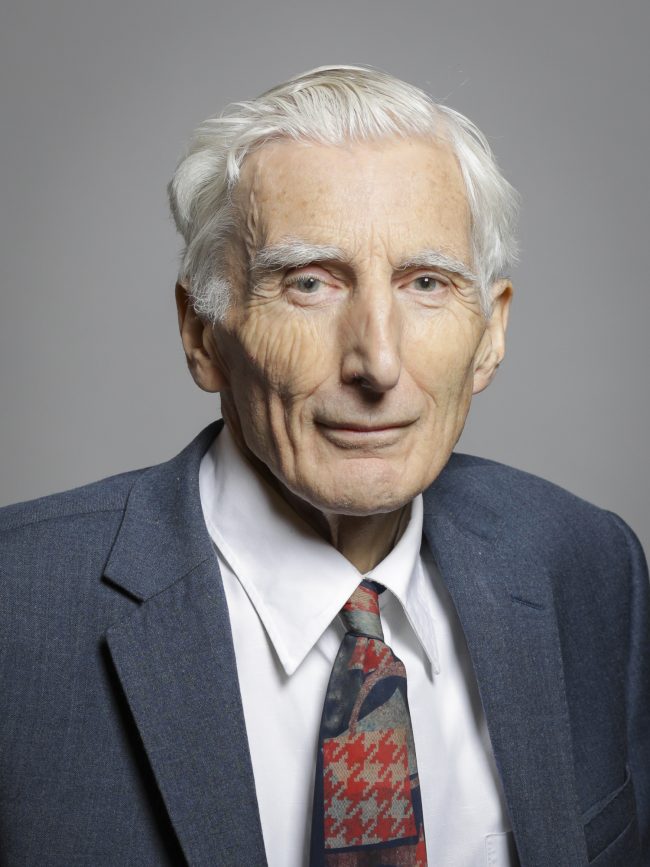 Lord Martin Rees, of Cambridge University, is the UK’s Astronomer Royal. He has written 10 books, including On the Future: Prospects for Humanity. Image via Roger Harris/ Wikipedia.

Meanwhile, Lamb has a different focus on the obstacles facing humanity. That is in part because Lamb is an expert in nuclear weapons proliferation and mitigation. He called it “crazy and bizarre” that we allow ourselves to live under a nuclear threat:

Why we would want to live in a world due to mishap, misunderstanding, mistake or madness, we could have the whole world destroyed, makes no sense. And we can do something about it.

Lamb said that while nuclear arsenals have been reduced between Russia and the United States, there are still some 14,000 weapons that are ready to be launched at a moment’s notice. A few hundred could destroy a country and a few thousand could destroy civilization on the planet. Missile defense has been the goal of many nations, but if just a single weapon gets through a missile defense, a million people can die. A missile defense, for it to work, would have to work perfectly, which is not feasible. Intercept has to occur quickly, in less than 170 seconds for solid-propelled warheads and less than 280 seconds for liquid-propelled warheads. The missile targeting is not even able to accurately distinguish between the exhaust plume and the warhead. In fact, the existence of missile defense systems has driven countries to produce more nuclear weapons in an effort to counteract defense systems. As Lamb put it:

Missile defense has never been able to protect against a nuclear attack, and there is no prospect that it could in the foreseeable future. Spending on missile defense has only made us less safe, by causing our potential adversaries to increase their nuclear arsenals. 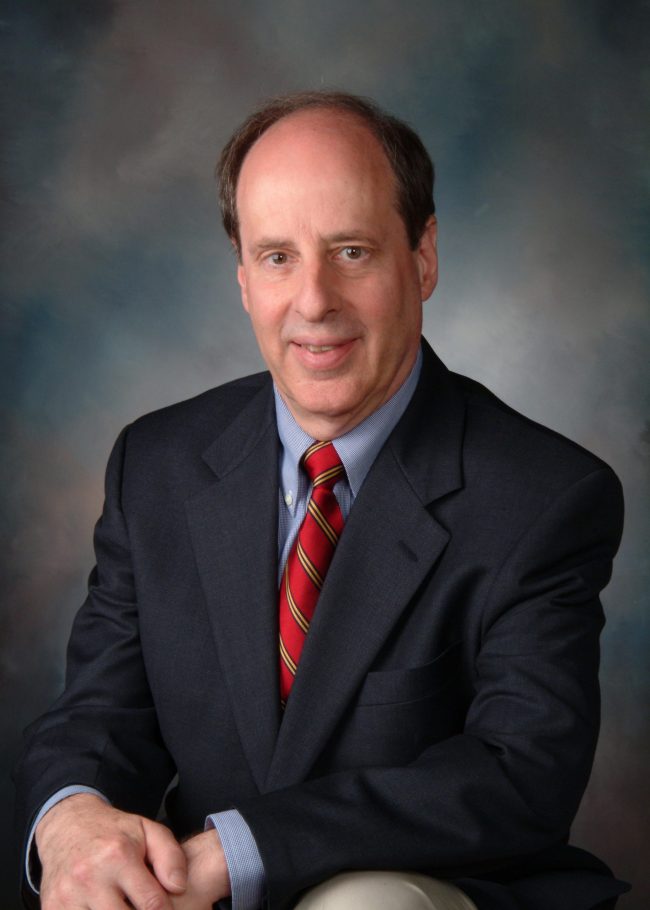 Frederick Lamb of the University of Illinois Urbana-Champaign is an astrophysicist and an expert on space policy, military uses of space, ballistic missiles, missile defenses, anti-satellite weapons, and the technical aspects of nuclear test bans, verification of arms control agreements and nuclear nonproliferation. Image via University of Illinois.

What works? According to Lamb:

When we have become more safe, it’s when we’ve made agreements that reduce the number of nuclear weapons that threaten us. This has only been possible when we agreed to limit defenses.

But, Lamb asserted, there is one way in which nuclear is still important for humanity’s future, and that is energy production. Lamb – a proponent of nuclear energy, at least in the short term – believes we need to work toward making the technological advances that will allow us to stop using carbon-based fuels:

It’s a question of time. We have a limited amount of time to be able to stop the global warming before it becomes really serious … We’re going to, at least in the interim, find a way to use nuclear power to get us through this transition period.

Rees agrees with the need for sustainable energy production, and he also sees food as an important issue. With 9 billion people expected to be on the planet by mid-century, we need more efficient food production. Rees hopes we find ways of sustainably and intensively growing plants and vegetables so we don’t encroach on forest and land, and he believes development of artificial meat will be crucial to feeding future populations.

Lamb and Rees discussed their backgrounds in astrophysics and their concern with the future of the planet. Lamb was interested in physics as a child, and his parents turned to his expertise when the cold war heated up and everyone in the United States was told to build a bomb shelter as protection against a possible nuclear war. After studying the subject at the library, he said to his parents:

Mom and Dad, we have to talk. The only solution here is to prevent this from ever happening. If we have any money or time or energy that we would have spent digging a bomb shelter, we should spend it on trying to prevent it from happening.

Rees explained how his astronomy background meshes with his concern for humanity’s fate:

People often ask does being an astronomer have any effect on one’s attitude toward these things. I think it does in a way, because it makes us aware of the long-range future. We’re aware that it’s taken about 4 billion years for life to evolve from simple beginnings to our biosphere of which we are a part, but we also know that the sun is less than halfway through its life and the universe may go on forever. So we are not the culmination of evolution. Post-humans are going to have far longer to evolve. We can’t conceive what they’d be like, but if life is a rarity in the universe, then, of course, the stakes are very high if we snuff things out this century.

Bottom line: From nuclear weapons to biowarfare to cyberattacks, humanity has much to overcome. Martin Rees and Frederick Lamb discuss the obstacles we face as we look forward to humanity’s future on Earth.