Quelccaya, in the Central Andes of Peru, is the largest tropical ice cap in the world. A recent study suggests that the ice cap might soon cease to exist. 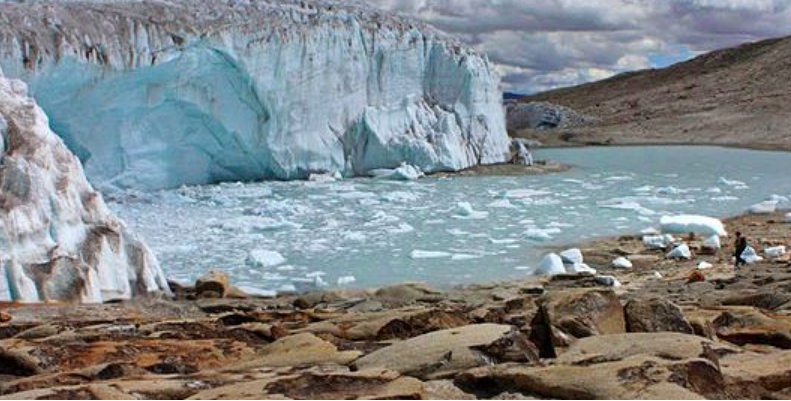 This article is republished with permission from GlacierHub. This post was written by Nabilah Islam.

Quelccaya is the largest tropical ice cap in the world. It is located in the Central Andes of Peru and has a summit elevation of about 5,680 meters [18,635 feet]. A recent study suggests that the ice cap might soon cease to exist. Researchers used climate data to examine the impacts of the different forcings [or causes of change] to determine how imminent its future disappearance is, and to what extent human activity affects the timing.

About 99 percent of the world’s tropical glaciers are located in the Andes, with around 70 percent found in Peru. Glaciers in the tropical Andes are critical to the regional environment. Through runoff, they provide a much-needed water supply during the dry season. A future disappearance of Quelccaya Ice Cap (QIC) could mean significant changes to the ecosystem, impacts on tourism, and consequences to the culture and traditions of the local populations.

Scientists used daily air temperature and snow height data to build projections of retreat at the QIC. Air temperature over the Peruvian Andes has increased over the last six decades, leading to greater retreat. Rising air surface temperatures are one of the major contributors to this retreat, although variations in precipitation and snowfall contribute as well. Meanwhile, El Nino and the South American Summer Monsoon can also impact QIC conditions, but on an interannual timescale.

The researchers also examined the different Representative Concentration Pathway scenarios (RCPs) that play a huge role in the future of tropical glaciers. RCPs are used in scientific modeling to provide temporal projections on greenhouse gas concentrations. These concentrations contribute to warming and have a great effect on glaciers. The rate of warming is typically amplified with elevation in many mountain regions due to elevation dependent feedbacks, which are explained further in the study.

Results of the research show that through anthropogenic and natural forcings, QIC loses mass at its front and base. This means that by around 2050, the ice cap could completely disappear. Even with a great reduction in greenhouse gas concentrations, results indicate that an eventual disappearance can be expected closer to the end of the century. The researchers further explained that these findings are consistent with observations of other glaciers in the tropics. We can look at glaciers in Bolivia, Colombia, and Venezuela, as they have also experienced accelerated retreat over the last decades.

Andrew Malone, a Visiting Assistant Professor at The University of Illinois at Chicago (UIC), told GlacierHub more about the shrinking of QIC and its impacts. “The largest impact would be on loss of water resources for communities both locally and downstream. In the short-term accelerated melting actually increases water resources. But as ice melts, that ‘stored’ water shrinks and shrinks, and at some point the glacier reservoir becomes so small that the total run-off contribution starts to decrease with time,” he said.

The melting of Qori Kalis glacier. The left is the glacier in 1978. Right image is from 2011, presenting a retreated glacier and the lake left from melt. Image via Bird Lai/Flickr.

Malone went on to explain that as glaciers melt, lakes form in their place. These lakes are dammed by glacial moraines, which are formed by buildup of falling dirt and rocks from melting glaciers. Moraines are not structurally sound. As ice falls off glaciers and into the new lakes, large waves can form and flood the downstream landscape. Malone said that this has happened to the lake in Qori Kalis valley, and as a result livestock were lost with the flooding. Similar events can be expected to happen at QIC as well.

While there is much research and understanding of the glacial and environmental impacts of climate change, the human impacts should also be considered. GlacierHub spoke with anthropologist Gustavo Valdivia, who is currently doing research on the Andes. His research looks at the impacts of QIC glacier melt on the nearby community of Phinaya. This community relies on herding alpaca, selling alpaca wool for their livelihood; thus, they are very dependent on runoff waters to irrigate the pastures for their flocks. At present the Phinaya community benefits from the greater runoff, Valdivia said, but this abundance is not likely to last long. The livestock might also be at risk from flooding, as seen in Qori Kalis.

Alpaca from the Phinaya community of Peru. Image via Christian Aid/Flickr.

Valdivia added that there is a key difference between understanding and experiencing climate. Researchers understand the science behind glacial retreat and warming, but it’s the people who experience these changes. He highlighted the importance of building genuine communication with scientific information. As glaciers continue to melt, it’s vital to build connections to the people and communities who are affected, examining ways in which we can adapt to the changes in our climate and environment. Though each community faces climate change in a specific way, they are also part of a global process of change.

Bottom line: A recent study suggests that the Quelccaya ice cap in Peru might soon cease to exist.