The fossil embryos of three little ichthyosaurs are preserved within the body of their mother that died while giving birth, 248 million years ago.

Three embryos found among the partial fossil remains of an adult ichthyosaur in China could be the earliest-known evidence of a live birth in the fossil record. The discovery strongly supports a theory that these ancient marine reptiles evolved from creatures that gave birth on land. Paleontologists announced the discovery of these 248-million-year-old fossils in a paper published on February 12, 2014 in the journal PLOS One.

Dr. Ryosuke Motani from the University of California, Davis, the paper’s lead author, said in a press release:

The study reports the oldest vertebrate fossil to capture the ‘moment’ of live-birth, with a baby emerging from the pelvis of its mother. The 248-million-year old fossil of an ichthyosaur suggests that live-bearing evolved on land and not in the sea.

The fossils found in China belonged to a genus of ichthyosaur called Chaohusaurus. Having lived 248 million years ago, Chaohusaurus represented an early phase in the evolutionary history of ichthyosaurs. Partial remains of an adult showed three embryo skeletons associated with it. One embryo appeared to be inside the mother’s body, while another was half-way emerged, head-first, from the mother’s pelvis. A third baby appeared to have already been born, lying outside its mother’s fossil skeleton. Given the placement of the embryos, paleontologists believe that this mother died while giving birth.

An artist’s depiction of Chaohusaurus, a genus of ichthyosaur. Image credit: Nobu Tamura via Wikimedia Commons.

During the Mesozoic era, from 250 to 65 million years ago, while dinosaurs walked the Earth, large air-breathing marine reptiles ruled the seas. Ichthyosaurs were a dominant presence in the oceans for much of that time, from about 250 to 90 million years ago. They were fast strong swimmers, shaped very much like modern-day tuna and mackerel.

Previously, scientists thought that the development of embryos inside a mother’s body for Mesozoic marine reptiles was an aquatic adaptation. Discovery of the Chaohusaurus mother and embryos strongly suggests otherwise. The head-first emergence of the baby suggests that the ancestors of these early ichthyosaurs gave birth on land. In contrast, whales and dolphins are usually born tail-first, presumably so that the calf does not drown during the birthing process. It’s possible that further along in their evolutionary history, ichthyosaurs may have also adapted tail-first birth of their young. 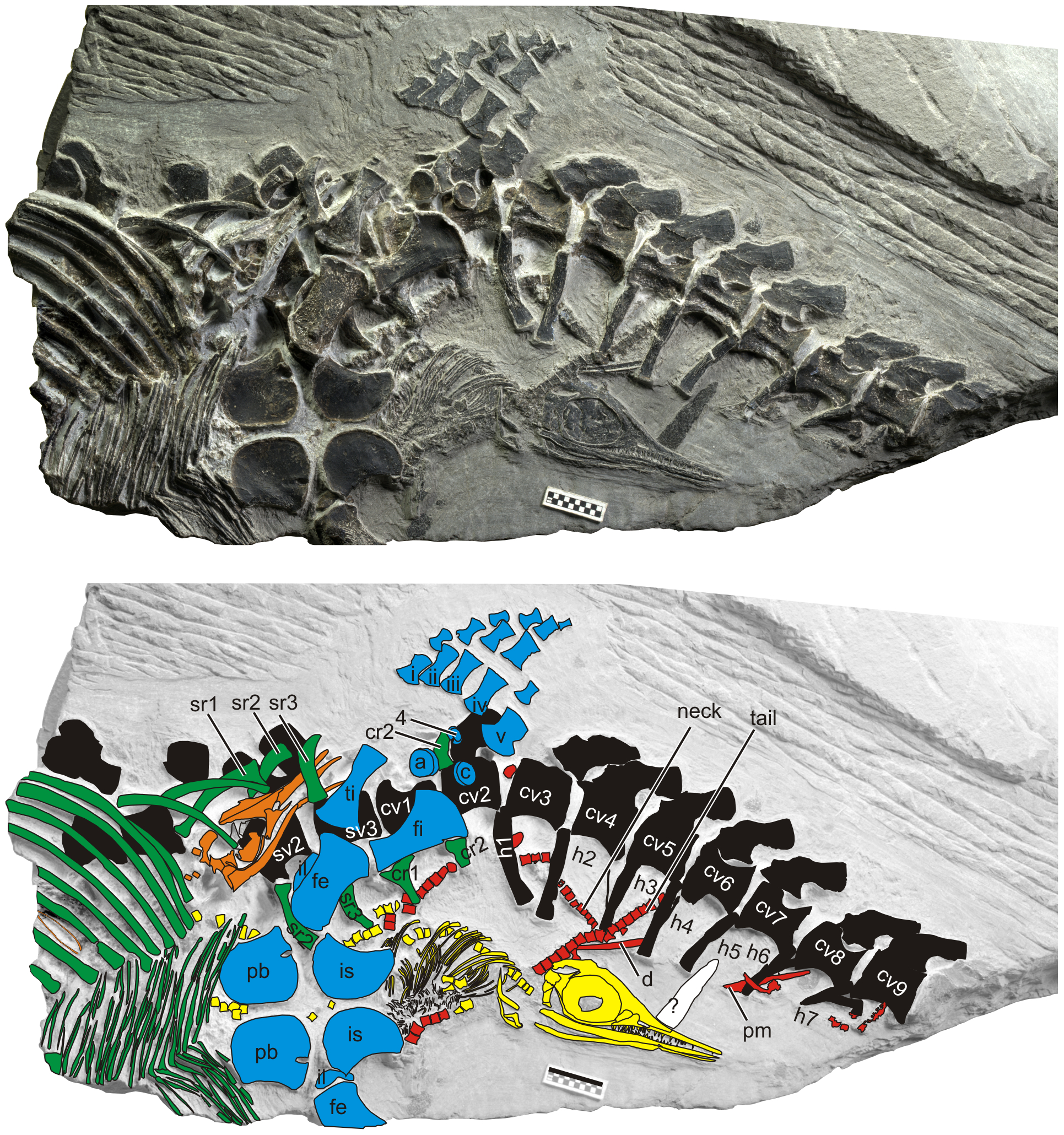 An image of two other almost-complete Chaohusaurus fossil skeletons, from the research paper in PLOS One, that were also collected from the same quarry as the birthing Chaohusaurus. The three specimens came from Majiashan, in east China’s Anhui Province. Image credit: Ryosuke Motani, doi:10.1371/journal.pone.0088640.

Bottom line: Scientists have discovered the fossil remains of a 248-million-year-old adult ichthyosaur in China that reveals the earliest-known live birth. They found three embryos with the fossil, including one that appeared to be emerging head-first from its mother’s pelvis, indicating that these marine reptiles evolved from ancestors that gave birth on land. These findings were announced in a paper published on February 12, 2014 in the journal PLOS One.