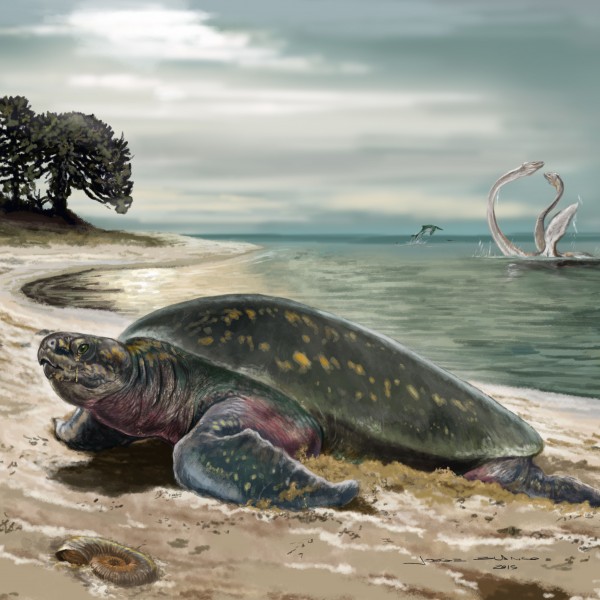 The sea turtle in its habitat, as it might have looked 120 million years ago. © Jorge Blanco. Via Senckenberg.

Researchers at the Senckenberg Research Institute in Frankfurt, Germany have discovered fossil evidence of the Earth’s oldest sea turtle. Nmaed Desmatochelys padillai sp, the fossilized shells and bones were uncovered in two sites near Villa de Leyva, Colombia. The findings, published in the journal PaleoBios, dates the reptile at 120 million years old – 25 million years older than any previously known specimen of turtle.

The fossil originates from sediments settled in Earth’s Cretaceous period, a period of warm climates, which resulted in higher sea levels and numerous shallow inland seas. Fossil evidence surrounding reptiles during this period is sparse, which makes dating discoveries difficult to verify. Cadena said in a Senckenberg release:

This lends a special importance to every fossil discovery that can contribute to clarifying the phylogeny of the sea turtles. 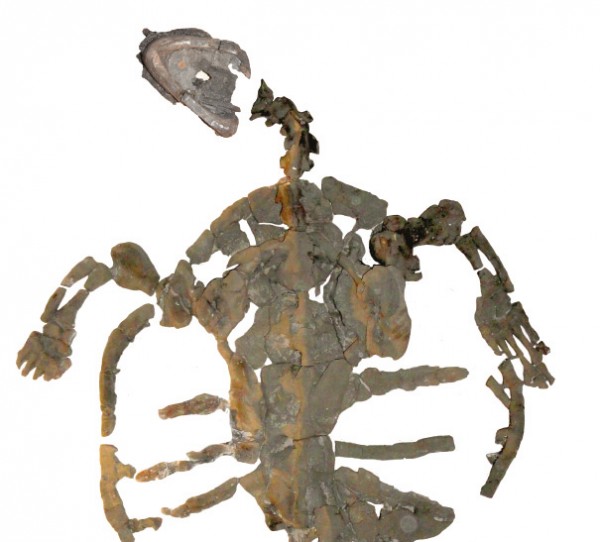 This unique discovery provides a new perspective on the evolutionary development of terrestrial turtles. Upon analysis, Cadena and team placed the fossils in the turtle group Chelonioidea, based on a variety of morphological characteristics like skull and shell shape.

Turtles in the Chelonioidea group dwelt in tropical and subtropical oceans, and are represented in modern Hawksbill and Green Sea Turtles. Cadena concluded:

Based on the animals’ morphology and the sediments they were found in, we are certain that we are indeed dealing with the oldest known fossil sea turtle.

Bottom line: Scientists in Germany have uncovered fossilized shells and bones of an ancient sea turtle at two sites in Colombia. They’ve named it Desmatochelys padillai sp and date the remains at 120 million years old, 25 million years older than any previously known specimen of turtle.