A bee from the age of dinosaurs

One hundred million years ago, a bee got trapped in tree resin. Over time, geological forces converted the resin to amber. Now a scientist arrives on the scene, to tell us this bee’s story. 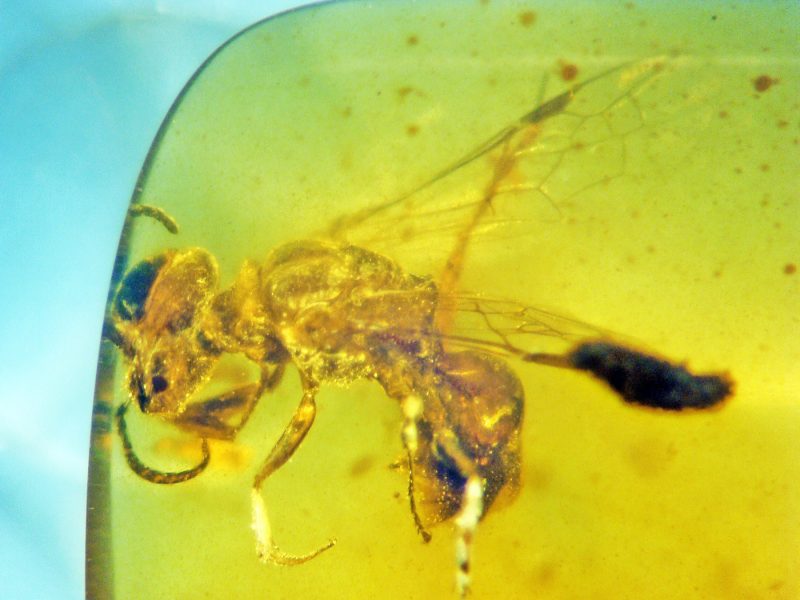 Primitive bee trapped in amber. It lived in a tropical jungle 100 million years ago, when flowering plants were just beginning to diversify. It’s thought that bees and flowering plants co-evolved. This specimen has traits from modern bees and their evolutionary ancestors, the carnivorous apoid wasps. Image via George Poinar Jr./ OSU.

About 100 million years ago, a female bee with young beetle larvae crawling all over her body flew haplessly into a glob of sticky tree resin where she became trapped. Over time, the resin fossilized to become amber, preserving the bee and its parasites in exquisite detail within the clear honey-colored rock. As rare as it is, this fossil bee isn’t the first to be found entombed in amber. But it is the only known known amber-encased bee that has pollen on it. And it’s the only fossil bee with parasites, providing a fascinating glimpse into a predator-prey relationship that continues to this day. And the entomologist who studied this doomed bee? He is George Poinar Jr. of Oregon State University (OSU), whose work helped inspire the movie “Jurassic Park.”

Poinar’s work also showed that the bee – which he named Discoscapa apicula – belonged to a new family, genus, and species. His findings were published in the January 29, 2020, issue of BioOne Complete.

George Poinar, Jr. is a renowned expert in animals and plants fossilized in amber. He’s also credited with popularizing the idea of extracting DNA from these primitive insects. This idea received widespread attention when Michael Crichton incorporated it into his blockbuster Jurassic Park franchise. In the movie, dinosaur blood is extracted from mosquitoes encased in amber from the age of dinosaurs, and DNA in the blood is used to clone living dinosaurs.

In the real world of science, researchers study insect pollinators, such as bees, because they’re critically important to the reproduction of flowering plants, some of which are key to humans’ food supply.

There are more than 16,000 known bee species worldwide, from seven taxonomic families. Bees feed primarily on nectar and pollen, in contrast to their evolutionary ancestors, apoid wasps, that preyed on other insects. 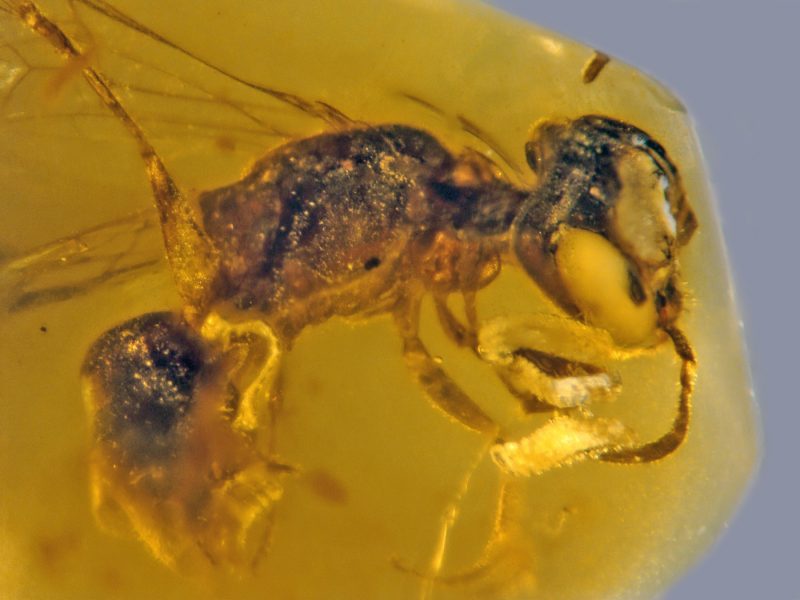 A new species of bee, trapped in amber for about 100 million years. Can you spot the parasitic beetle larvae it carried? Image via George Poinar Jr./ OSU.

The newly studied bee fossil, from Myanmar, dates to the mid-Cretaceous period. This bee’s world was a tropical forest of mostly conifers, ferns, cycads, ginkgo, and horsetails. Angiosperms – flowering plants – were just beginning to diversify, along with the primitive bees that pollinated their flowers. These ancient bees shared traits seen in both modern bees and their evolutionary forebearers, apoid wasps.

In a statement about this new research, Poinar commented on one of the most interesting features of the bee:

Something unique about the new family that’s not found on any extant or extinct lineage of apoid wasps or bees is a bifurcated scape.

The scape is a base section of the antenna, closest to the bee’s head. In this bee, it branches into two sections, one ending as a small spur. This feature has never before been seen in either living or fossil bees. 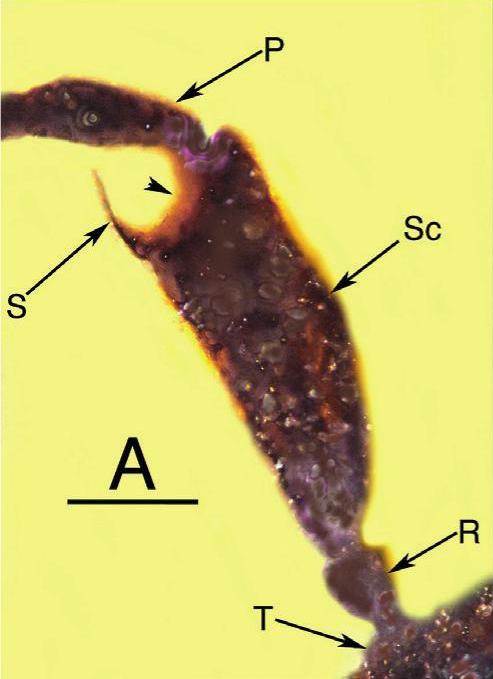 An image of the “scape” on one of the bee’s antennae, divided into 2 parts. This bifurcated scape has not seen before, in any known fossil or living bee. The scape is labeled “Sc” and appears divided into 2 branches, with 1 side ending as a small spur, labeled “S.” Other labeled parts are “T” for torulus (basal socket joint that allows antenna movement), “R” for radicle (antenna joint attached to the head), and “P” for pedicle (antenna segment that creates an elbow-like joint with the scape). Image via George Poinar Jr./ BioOne Complete.

The fossil record of bees is pretty vast, but most are from the last 65 million years and look a lot like modern bees. Fossils like the one in this study can tell us about the changes certain wasp lineages underwent as they became palynivores, or pollen eaters.

There were pollen grains on the bee, indicating it had visited some flowers not long before it died.

Also present were very young beetle larvae on the bee. These parasitic larvae were not feeding on it, but were hitching a ride from one of the flowers visited by the bee to its nest. At the nest, the parasitic beetle larvae would continue to develop, feeding on bee larvae and the food left by the adult bee. 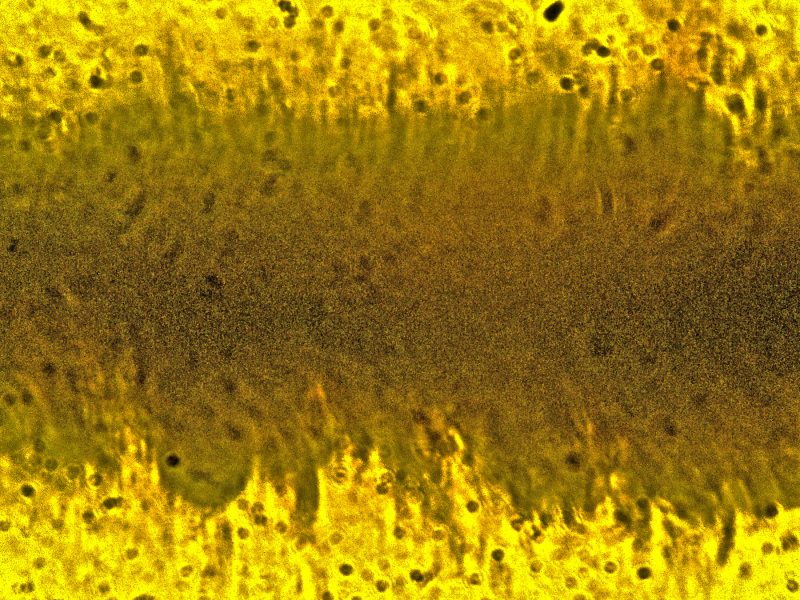 Additional evidence that the fossil bee had visited flowers are the 21 beetle triungulins – larvae – in the same piece of amber that were hitching a ride back to the bee’s nest to dine on bee larvae and their provisions, food left by the female.

It is certainly possible that the large number of triungulins caused the bee to accidently fly into the resin. 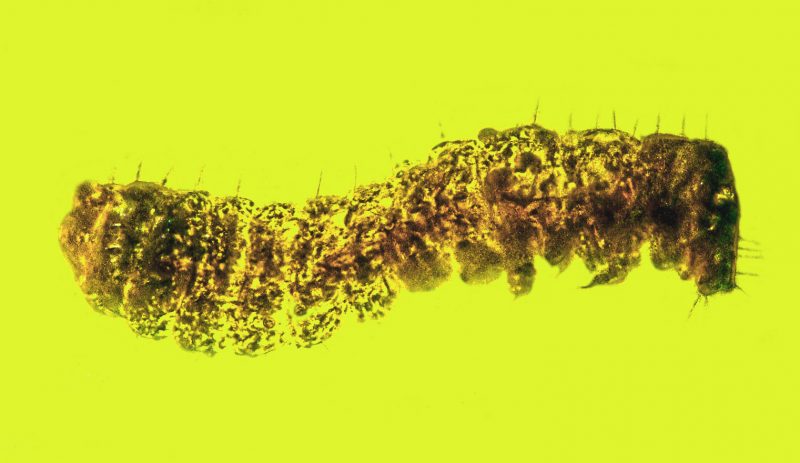 One of the young larval beetles. Poinar counted a total of 21 larvae on this bee. These larvae are carried by the adult bee from a flower to the nest, where the larvae parasitize bee larvae and eat the food collected by the adult bee. Image via George Poinar Jr./ OSU.

Bottom line: A bee that lived during the age of dinosaurs became entombed in tree resin about 100 million years ago. It was identified as a species new to science, and is the only known fossil bee encased in amber to carry parasitic beetle larvae and pollen.