One surprise finding of the new research is that the coast of Panama has been a meeting ground for humpback whales for at least 270,000 years and still is today. 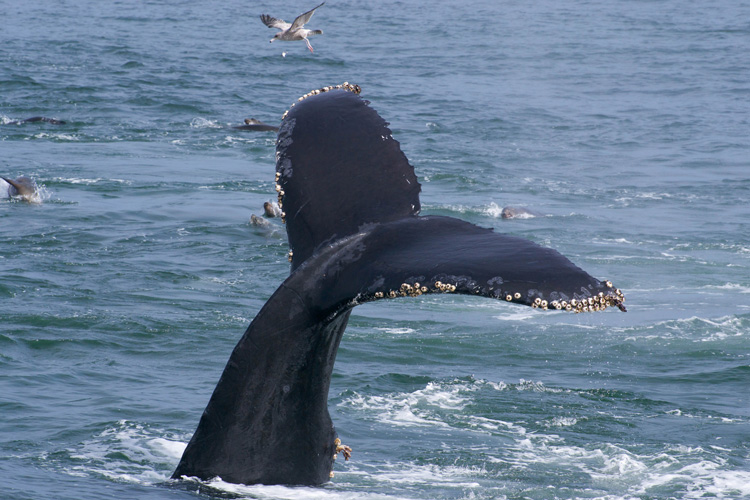 Whale barnacles line the edges of the flukes of a humpback whale. Image via Blue Ocean Whale Watch.

New research used barnacles that hitch rides on the backs of humpback and gray whales to help scientists reconstruct the migrations of whale populations millions of years ago.

The barnacles not only record details about the whales’ yearly travels, they also retain this information after they become fossilized, which enabled the researchers to reconstruct the migration routes of whales from millions of years in the past.

What happens is that oxygen isotope ratios in barnacle shells change with ocean conditions, allowing scientists to chart the migration of the host whale – for example to warmer breeding grounds or colder feeding grounds. In the new study, marine paleobiologists have discovered that barnacles retain this information even after they fall off the whale, sink to the ocean bottom, and become fossils.

As a result, the travels of fossilized barnacles can serve as a proxy for the journeys of whales in the distant past. University of California Berkeley doctoral student Larry Taylor is lead author of the study, published March 25, 2019, in the peer-reviewed journal Proceedings of the National Academy of Sciences. Taylor said in a statement:

One of the more exciting things about the paper, in my mind, is that we find evidence for migration in all of these ancient populations, from three different sites and time periods, but also from both humpback and gray whale lineages, indicating that these animals, which lived hundreds of thousands of years ago, were all undertaking migrations similar in extent to those of modern-day whales.

For example, one surprise finding of the study is that the coast of Panama has been a meeting ground for different subpopulations of humpback whales for at least 270,000 years and still is today. Whales visit Panama from as far away as Antarctica and the Gulf of Alaska. 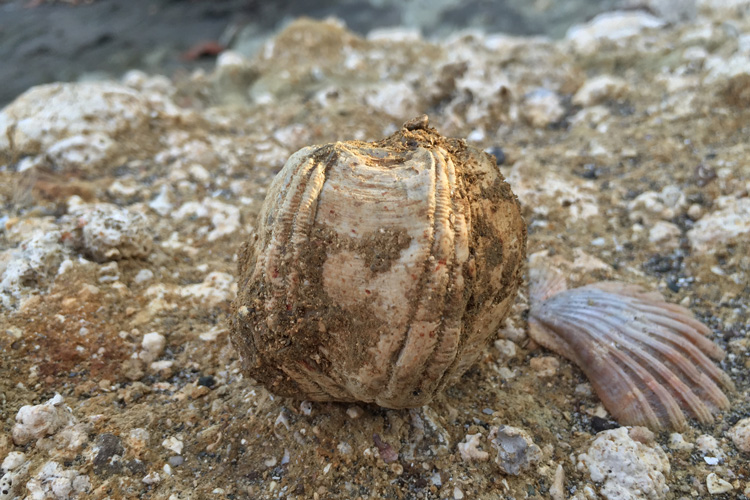 This fossilized whale barnacle was unearthed in Panama at an ancient meeting place for whale subpopulations from around the Pacific Ocean. Image via Larry Taylor.

Barnacles are crustaceans, like crabs, lobsters and shrimp, that remain stuck in one place their whole lives, encased in a protective hard shell and sticking out their legs to snatch passing food. Most glue themselves to rocks, boats or pilings, but whale barnacles attach to a whale’s skin by boring down into it. Some whales have been estimated to carry up to 1,000 pounds of barnacles, which are visible when they breach. Clusters of barnacles are used to identify individual whales. Study co-author Aaron O’Dea, of the Smithsonian Tropical Research Institute in Panama, said:

This gives the barnacle several advantages: a safe surface to live on, a free ride to some of the richest waters in the world and a chance to meet up with other (barnacles) when the whales get together to mate. 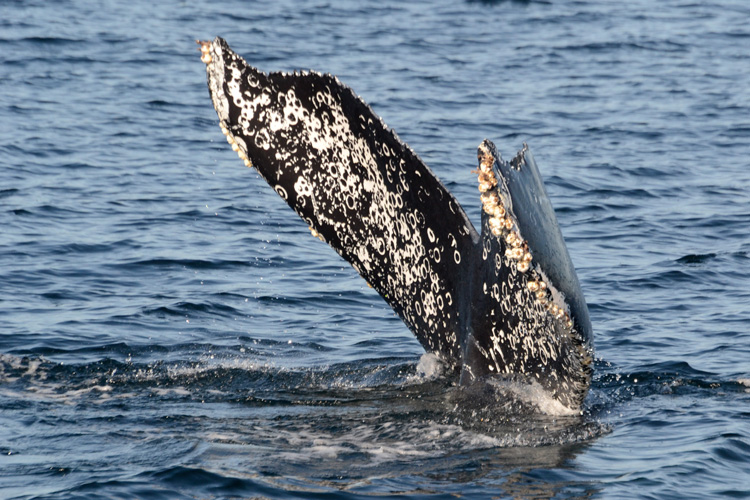 Patterns left by whale barnacles are so distinctive they can be used to identify individual whales. Image via Blue Ocean Whale Watch.

Here’s more from the scientists about the technique they used in the research:

The technique is based on measuring the oxygen isotopes in the calcium carbonate, or calcite, shell of the barnacle. The ratio of oxygen-18 to oxygen-16 goes up as the temperature drops. Since barnacles lengthen their shells by a few millimeters a month as they try to stay attached to whales in the face of the mammals’ shedding skin, the composition of the new shell reflects the ocean temperature and general isotopic composition where it formed.

The technique works because different species of whale barnacle hitch rides on different species of whale, so paleontologists can know, when they find a fossilized barnacle, which species it rode with. Normally, the barnacles stay with a whale between one and three years, until they fall or are brushed off, often at whale breeding grounds. At least 24 fossil assemblages of whale barnacles have been found around the world, Taylor said.

This information about ancient migration will help scientists understand how migration patterns may have affected the evolution of whales over the past three to five million years, how these patterns changed with changing climate and help predict how today’s whales will adapt to the rapid climate change happening today. 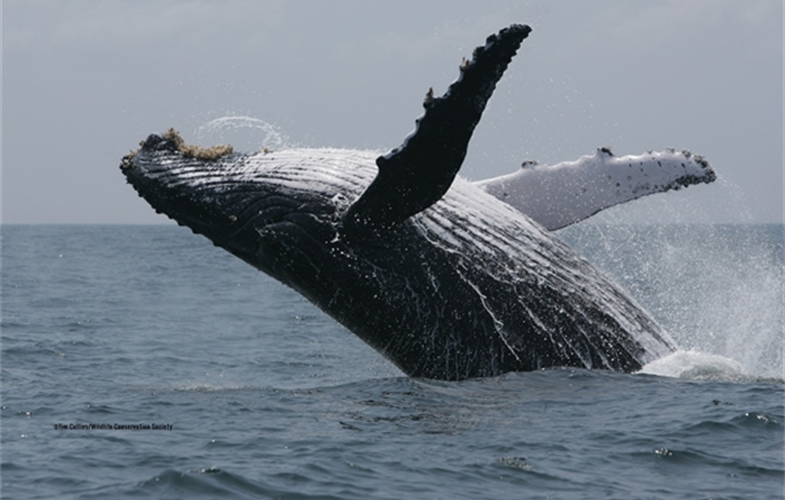 A breaching humpback whale in the waters of Gabon. Image via Tim Collins/WCS

Bottom line: For a new study, scientists used barnacles that hitch rides on the backs of whales to help scientists reconstruct the migrations of whale populations millions of years ago.

Via University of California Berkeley