Two 160 million-year-old fossils discovered in China are the oldest known mammal gliders. “These Jurassic mammals are truly ‘the first in glide.’” 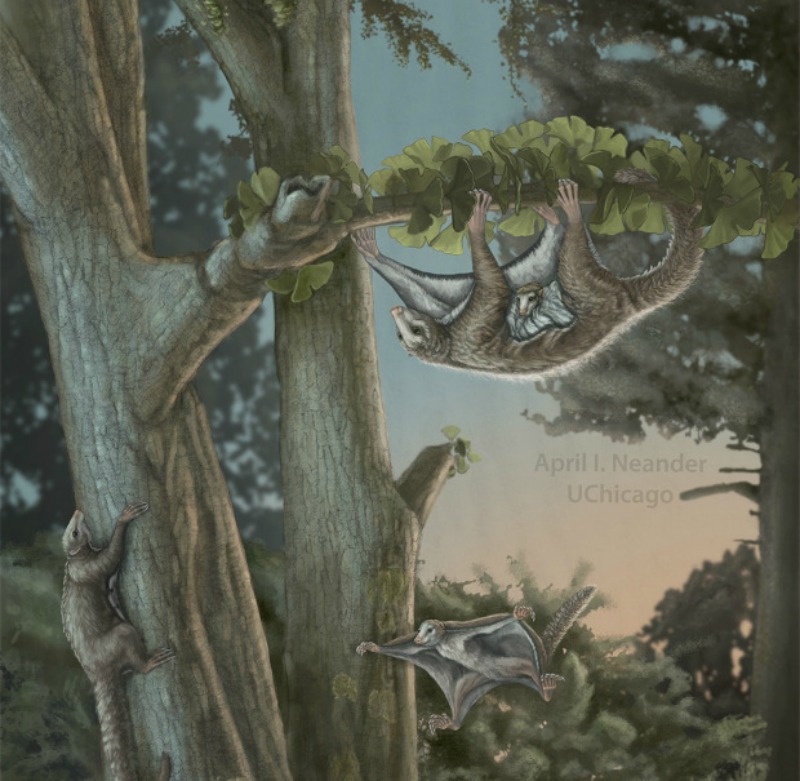 Maiopatagium in Jurassic forest in crepuscular (dawn and dusk) light: A mother with a baby in suspending roosting posture, climbing on tree trunk, and in gliding. Image via April I. Neander/UChicago.

Scientists say that two 160 million-year-old mammal fossils discovered in China, from the dinosaur-dominated Jurassic Period are the are the oldest known gliders in the long history of early mammals. With long limbs, long hand and foot fingers, and wing-like membranes, these early mammals – Maiopatagium furculiferum and Vilevolodon diplomylos – evolved to glide and live in trees.

The new discoveries suggest that the volant – or flying – way of life evolved among mammalian ancestors 100 million years earlier than the first modern mammal fliers. That’s according to two papers international team of scientists from the University of Chicago and Beijing Museum of Natural History published in the journal Nature in August 2017 (here and here.)

Zhe-Xi Luo, PhD is a professor of organismal biology and anatomy at the University of Chicago and an author on both papers. Luo said in a statement:

These Jurassic mammals are truly ‘the first in glide.’ In a way, they got the first wings among all mammals.

With every new mammal fossil from the Age of Dinosaurs, we continue to be surprised by how diverse mammalian forerunners were in both feeding and locomotor adaptations. The groundwork for mammals’ successful diversification today appears to have been laid long ago.

The Jurassic Maiopatagium and Vilevolodon are from an entirely extinct branch on the mammalian evolutionary tree, but are considered to be among forerunners to modern mammals. From a University of Chicago statement about the studies:

The ability to glide in the air is one of the many remarkable adaptations in mammals. Most mammals live on land, but volant mammals, including flying squirrels and bats that flap bird-like wings, made an important transition between land and aerial habitats. The ability to glide between trees allowed the ancient animals to find food that was inaccessible to other land animals. That evolutionary advantage can still be seen among today’s mammals such as flying squirrels in North America and Asia, scaly-tailed gliders of Africa, marsupial sugar gliders of Australia and colugos of Southeast Asia. 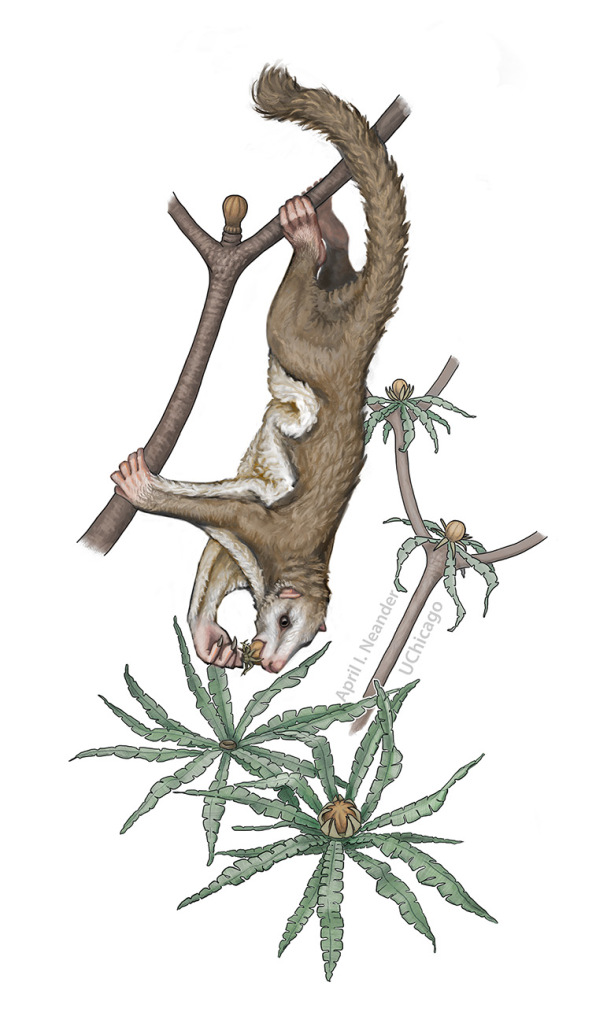 A gliding mammaliaform feeding on the soft parts of a bennethelian plant of the Jurassic. Image via April I. Neander/UChicago.

Both of the fossils show the exquisitely fossilized, wing-like skin membranes between their front and back limbs. They also show many skeletal features in their shoulder joints and forelimbs that gave the ancient animals the agility to be capable gliders. Evolutionarily, the two fossils, discovered in the Tiaojishan Formation, northeast of Beijing, China, represent the earliest examples of gliding behavior among extinct mammal ancestors.

There are some differences between the two newly-discovered extinct mammals and modern gliders, the researchers noted. Today, the hallmark of most mammal gliders is their herbivorous diet that typically consists of seeds, fruits and other soft parts of flowering plants. But Maiopatagium and Vilevolodon lived in a Jurassic world where the plant life was dominated by ferns and gymnosperm plants like cycads, gingkoes and conifers – long before flowering plants came to dominate in the Cretaceous Period, and their way of life was also associated with feeding on these entirely different plants. This distinct diet and lifestyle evolved again some 100 million years later among modern mammals.

Read more from the University of Chicago