We now have the first scientifically accepted photos of triple and quadruple rainbows. For some, it’s as if we’ve captured a picture of a real unicorn.

A scientific journal has accepted the first photos of a triple (tertiary) rainbow and a quadruple (quaternary) rainbow, both taken in summer 2011 in Germany. And it is likely we will see more photos of triple and quadruple rainbows in the years ahead.

Like many of you reading, I thought triple rainbows – three rainbows arcing through the sky at once – had been seen and photographed many times. An Internet search reveals photos claiming to be triple and even quadruple rainbows – but apparently these images either aren’t real or aren’t true rainbows. According to the Optical Society in Washington D.C. – a scientific society with 16,000 members around the world – there have been only five scientific reports of triple rainbows in 250 years. Some scientists believed triple and quadruple rainbows did not truly exist in nature, but now scientists have their proof.

A new meteorological model provided the scientific underpinnings to find these rare and precious triple and quadruple rainbows. The work is described in a series of papers in a special issue – Issue 28 – of the journal Applied Optics from the Optical Society, published September 30, 2011.

The beautiful image at the top of this post shows the third-order and fourth-order band of the quadruple rainbow. The first two bands of the rainbow are not shown in this image, which was taken by Michael Theusner on June 11, 2011 in Schiffdorf, Germany.

The image below is the first-ever picture of a triple rainbow.

Michael Grossmann took this image on May 15, 2011 in Kampfelbach, Germany. (a) is his raw camera image. (b) shows the third-order rainbow arc, marked by arrows, after contrast expansion and unsharp masking. (The two reference positions A and B are for image orientation.)

We all know about rainbows to some extent, because everyone loves to see one. In our culture, we consider them a symbol of hope and good luck. When sunlight is refracted, or split, then reflected once in droplets of water, you see a single rainbow. When light is reflected twice inside water droplets, you see a double rainbow. Three reflections create a triple rainbow, and four a quadruple rainbow. 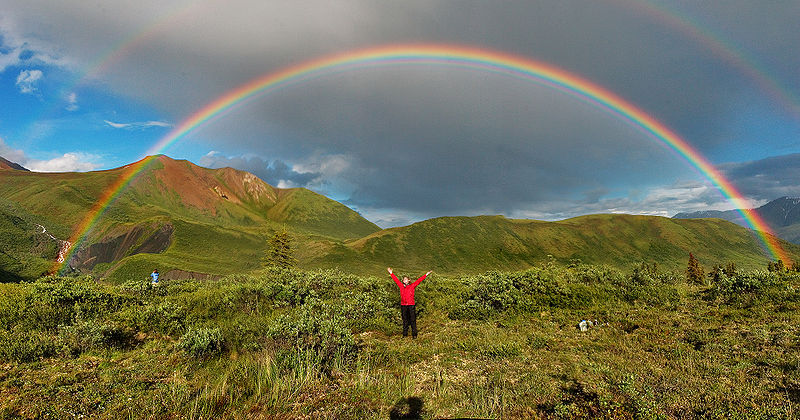 Double rainbow in Alaska. The shadow of the photographer’s head on the bottom marks the centre of the rainbow circle (antisolar point). Image Credit: Wikimedia Commons

But – to see a triple or quadruple rainbow – you have to look toward the sun. Triple and quadruple rainbows form around the sun, centered on it. They are hard to see because, to see them, you have to look into the sun’s glare. That might explain why only five scientifically knowledgeable observers had described tertiary rainbows during the past 250 years, prior to Michael Grossmann’s first true photo.

Raymond Lee, a professor of meteorology at the U.S. Naval Academy, predicted a year ago how triple rainbows might be found and challenged rainbow chasers to find them. He told Foxnews.com that photographers should hold one hand out at arm’s length, with a thumb over the sun.

Then they should splay their fingers so that the distance between their pinky and thumb is at about a 17 degree angle. Where their pinky stops is where the third and fourth bands should be.

Lee figured this method out by reviewing descriptions of the scientific sightings of triple rainbows, then using a mathematical model – with colleague Philip Laven – to predict what conditions might produce visible triple rainbows. According to a press release by the Optical Society:

First, they needed dark thunderclouds and either a heavy downpour or a rainstorm with nearly uniformly sized droplets. Under these conditions, if the sun broke through the clouds, it could project a tertiary rainbow against the dark clouds nearby. The contrasting colors would make the dim tertiary visible.

When Lee presented his findings at last year’s International Conference on Atmospheric Optics, some scientists argued with him heatedly, saying that triple and quadruple rainbows were a myth, akin to the pot of gold at a raindow’s end.

But now we have the actual photos. According to the Optical Society, the photos underwent only minimal image processing to improve the contrast.

Michael Grossman recalled seeing a double rainbow on the day he snapped his photo of the triple rainbow. When the rain intensified, he said knew he had to turn toward the sun. He said:

It is really exaggerated to say that I saw it, but there seemed to be something.

The pictures he snapped in the rain showed he had captured the triple rainbow. Theusner’s photo – the second-ever of a triple rainbow and first of a quadruple rainbow – came about a month later. Now that the technique for seeing them has been proven, we can expect other sky photograpahers to take up the challenge – and more photos of triple and quadruple rainbows in the years ahead.

A double rainbow clearly showing the dark area between the two bands. This region is known as Alexander’s dark band. Image Credit: NASA

To learn more about how triple and quadruple rainbows form, and about the range of rainbows, mistbows, moonbows, halos and other delicate light phenomena of the open air, check out Les Cowley’s Atmospheric Optics , a wonderful website.