No fatalities were reported in the February 13, 2021, strong earthquake in Japan, which occurred off Japan’s east coast, near the epicenter of the 2011 9.0-magnitude Tohoku earthquake. 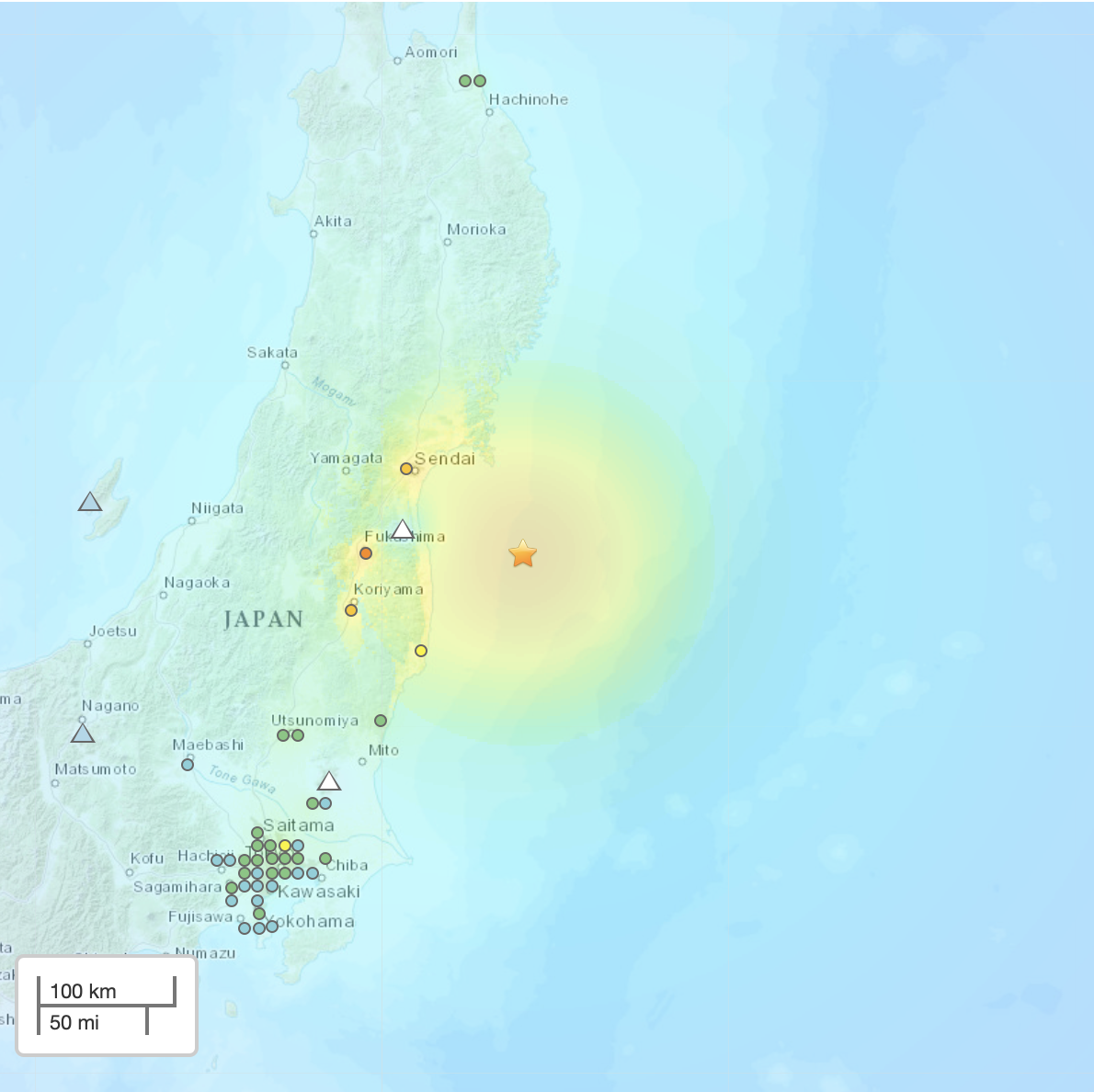 Visit USGS to see a chart showing how the colors on this map correlate to the intensity of shaking from the February 13, 2021, earthquake in Japan. Generally speaking, on this map, yellow indicates strong shaking. Notice that Fukushima is labeled on this map, and is within the area of strong shaking. Image via USGS.

A strong earthquake of magnitude 7.1 rocked Japan on February 13, 2021. The quake struck off Japan’s east coast, near the epicenter of the massive 9.0-magnitude Tohoku earthquake of 2011, which caused a huge tsunami. The 2011 earthquake and tsunami caused some 20,000 deaths and initiated a major nuclear accident at the Fukushima Daiichi Nuclear Power Plant, the most severe nuclear accident the world had seen since Chernobyl in 1986. The Japan Meteorological Agency called February 13 quake an “aftershock” of the 2011 quake. Aftershocks of such large earthquakes can, apparently, continue for some years. What’s more, the strong quake took place just weeks before the 10-year anniversary of the Tohoku earthquake and tsunami.

No tsunami warning was issued. The BBC reported:

There are reports of about 50 people injured, officials say, and almost one million homes are without power.

Japan is an earthquake-prone nation. It lies along the Pacific Ring of Fire, a region encircling the Pacific Ocean where roughly 90% of all the world’s earthquakes and 80% of the largest ones strike. According to Reuters, about 20% of the world’s earthquakes of magnitude 6 or greater happen along the Ring of Fire. Reuters also said that a tremor occurs in Japan at least every five minutes, and each year there are up to 2,000 quakes that can be felt by people. USGS reported:

Large earthquakes in the vicinity of Japan and Taiwan have been both destructive and deadly. The regions high population density makes shallow earthquakes especially dangerous. Since 1900 there have been 13 earthquakes (9 in Japan, 4 in Taiwan) that have each caused over 1000 fatalities, leading to a total of nearly 200,000 earthquake related deaths. In January 1995 an earthquake that ruptured a southern branch of the Japan Median Tectonic Line near the city of Kobe (population 1.5 million) killed over 5000 people. The 1923 Kanto earthquake shook both Yokohama (population 500,000, at that time) and Tokyo (population 2.1 million), killing 142,000 people. The earthquake also started fires that burned down 90% of the buildings in Yokohama and 40% of the buildings in Tokyo. Most recently, the M9.0 Tohoku earthquake, which ruptured a 400 km stretch of the subduction zone plate boundary east of Honshu, and the tsunami it generated caused over 20,000 fatalities.

A helicopter – flying over the port of Sendai, Japan, to deliver food to survivors of the 9.0-magnitude Tohoku earthquake and tsunami – captured this scene in 2011. Image via Wikimedia Commons.

The 2021 lunar calendars are here. A few left. Order yours before they’re gone.