This extinct horned turtle was the size of a car 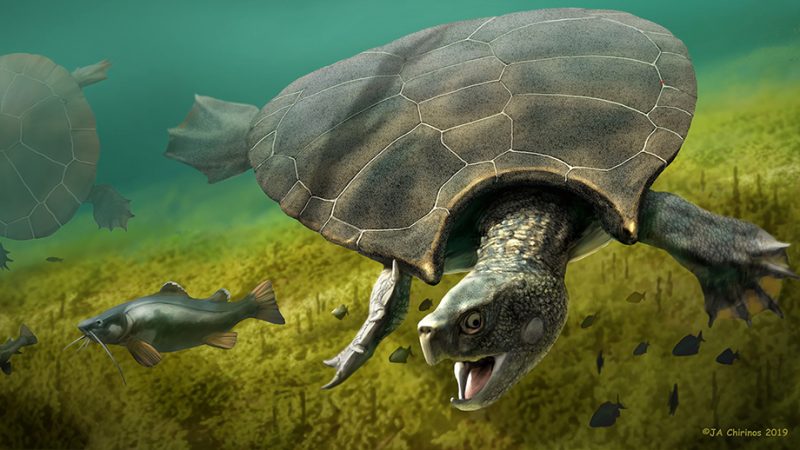 Artist’s concept of the giant turtle Stupendemys geographicus that lived in Venezuela 8 million years ago. Image via Jaime Chirinos/ University of Zurich.

A team of paleobiologists has discovered exceptional fossil specimens of an extinct giant freshwater turtle in Venezuela and Colombia. The enormous turtle – a species from the genus Stupendemys – lived 5 to 10 million years ago in lakes and rivers of what’s now northern South America. Stupendemys was one of the biggest turtles that ever lived, with a shell that measured about 8 to almost 10 feet (2.4-3 meters). What’s more, it turns out that the shell of the male Stupendemys had horns, a rare feature in turtles.

The new specimens were from Stupendemys geographicus, a turtle species first described in the mid-1970s. The finds included the largest shell reported for any turtle ever – living or extinct – with a carapace (upper shell) length of 8 feet (2.4 meters) and estimated body mass of 2,500 pounds (1,145 kg), almost 100 times the size of its closest living relative, the big-headed Amazon river turtle.

Paleontologist Edwin Cadena of the Universidad del Rosario in Bogotá is lead author of the study, published February 7, 2020, in the journal Science Advances. Cadena told The Guardian:

Stupendemys geographicus was huge and heavy. The largest individuals of this species were about the size and length of a sedan automobile if we take into account the head, neck, shell and limbs.

In some individuals, the complete carapace showed a peculiar and unexpected feature: horns. University of Zurich paleontologist Marcelo Sánchez is a study co-author. He said in a statement:

According to Sánchez, this is the first time that sexual dimorphism – distinct differences in size or appearance between the sexes of a species – in the form of horned shells has been reported for any of the side-necked turtles, one of the two major groups of turtles world-wide. 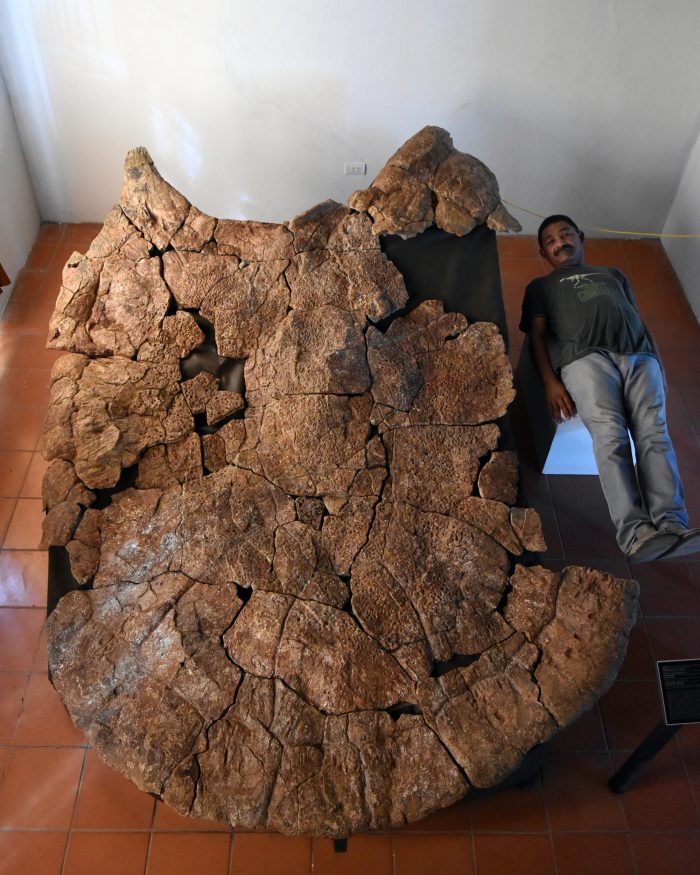 Despite its tremendous size, the turtle had natural enemies. In many areas, the occurrence of Stupendemys coincides with Purussaurus, the largest caimans. This was most likely a predator of the giant turtle, given not only its size and dietary preferences, but also as inferred by bite marks and punctured bones in fossil carapaces of Stupendemys.

Since the scientists also discovered jaws and other skeleton parts of Stupendemys, they were able to revise the evolutionary relationships of this species in the turtle tree of life. Sánchez said:

Based on studies of the turtle anatomy, we now know that some living turtles from the Amazon region are the closest living relatives.

Source: The anatomy, paleobiology, and evolutionary relationships of the largest extinct side-necked turtle