If you go by cartoons and T-shirts, you might think evolution proceeds as an orderly march toward a preordained finish line. But evolution has no endpoint in mind.

Evolution doesn’t proceed in a straight line. So why draw it that way? Image via Uncle Leo/Shutterstock.com.

Evolution doesn’t follow a preordained, straight path. Yet images abound that suggest otherwise. From museum displays to editorial cartoons, evolution is depicted as a linear progression from primitive to advanced.

You’ve certainly seen the pictures of a chimpanzee gradually straightening up and progressing through various hominids all the way to a modern human being. Yes, they can be humorous. But these kinds of popular representations about evolution get it all wrong. 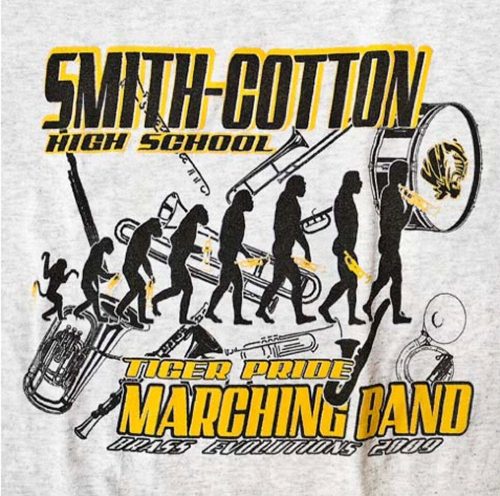 As three scholars of biodiversity and biology, these images bother us because they misrepresent how the process of evolution really works – and run the risk of reinforcing the public’s misconceptions.

Climbing a ladder to perfection

This misunderstanding is a holdover from before 1859, the year Charles Darwin first published his scientific theory of evolution via natural selection. 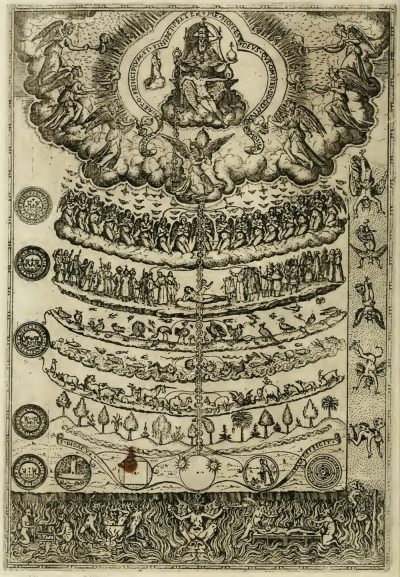 The scala naturae presents a hierarchy of creation. Image by Retorica Christiana, Didacus Valdes, 1579, via The Conversation.

Until then, the traditional view of how the world was organized was through a “progression in perfection.” This concept is explicit in the idea of the “great chain of being,” or “scala naturae” in Latin: All beings on earth, animate and inanimate, could be organized according to an increasing scale of perfection from, say, mushrooms at the bottom up through lobsters and rabbits, all the way to human beings at the top.

Originating with Plato and Aristotle, this view gets three main things wrong.

First, it holds that nature is organized hierarchically. It is not a random assortment of beings.

Secondly, it envisions two organizing criteria: things progress from simple to perfect and from primitive to modern.

And thirdly, it supposes there are no intermediary stages between levels in this hierarchy. Each level is a watertight compartment of similar complexity – a barnacle and a coral reef on the same rung are equally complex. No one is halfway between two steps.

In the 1960s a variation of the scala naturae conceived by Jesuit philosopher Pierre Teilhard de Chardin became popular. His idea was that, although life is somewhat branched, there is direction in evolution, a progression toward greater cognitive complexity and, ultimately, to identification with the divine, that is, God.

Gradual changes, in every direction

At least since Darwin, though, scientists’ idea of the world is organized through transitions – from inanimate molecules to life, from earlier organisms to different kinds of plants and animals, and so on. All life on Earth is the product of gradual transformations, which diversified and gave rise to the exuberance of organisms that we know today.

Two transitions are of particular interest to evolutionary biologists. There’s the jump from the inanimate to the animate: the origin of life. And there’s the appearance of the human species from a monkey ancestor. 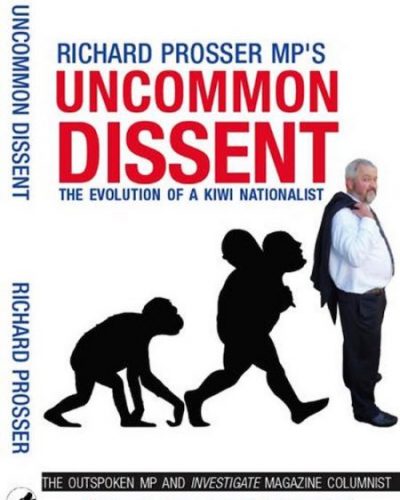 Book covers are just one place you might see a riff on this evolutionary march. Image via Howling at the Moon Press/Amazon.

The most popular way to represent the emergence of human beings is as linear and progressive. You’ve probably seen images, logos and political and social propaganda that draw on this representation.

But none of these representations capture the dynamics of Darwin’s theory. The one image he included in his book “On the Origin of Species” is a tree diagram, the branching of which is a metaphor for the way species originate, by splitting. The absence of an absolute time scale in the image is an acknowledgment that gradual change happens on timescales that vary from organism to organism based on the length of a generation. 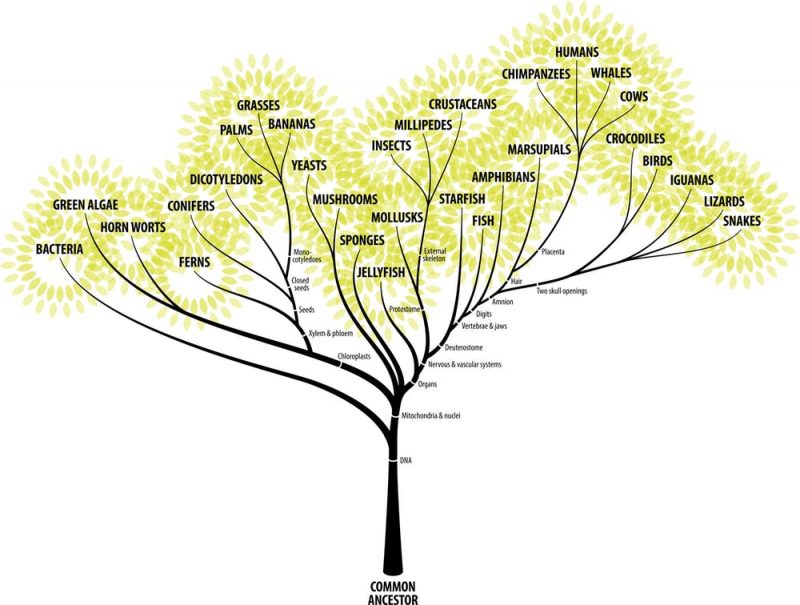 Forget a hierarchy – each organism alive now is the most evolved of its kind. Image via Zern Liew/Shutterstock.com.

According to Darwin, all current organisms are equally evolved and are all still affected by natural selection. So, a starfish and a person, for example, are both at the forefront of the evolution of their particular building plans. And they happen to share a common ancestor that lived about 580 million years ago.

Darwin’s theory doesn’t presuppose any special direction in evolution. It assumes gradual change and diversification. And, as evolution is still operating today, all present organisms are the most evolved of their kind. 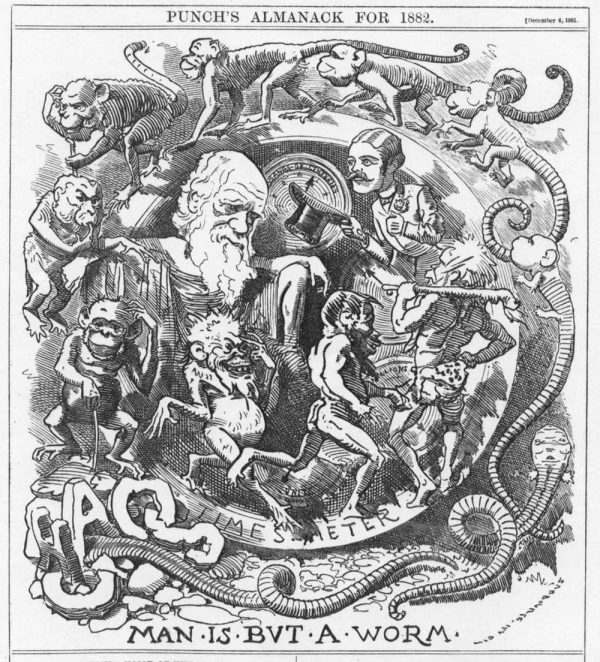 ‘Man Is But A Worm’ caricature of Darwin’s theory in the Punch almanac for 1882. Image via Edward Linley Sambourne.

Having been around nearly 2,000 years, the idea of the scala naturae did not disappear during Darwin’s time. It might actually have been reinforced by something so unexpected as a cartoon. Illustrator Edward Linley Sambourne’s immensely popular caricature of evolution “Man Is But a Worm,” published in Punch’s Almanack for 1882, combined two concepts that were never linked in Darwin’s mind: gradualism and linearity.

Given centuries of religious belief in a “great chain of being,” the idea of linearity was an easy sell. The iconic version of this concept is, of course, the depiction of a supposed ape-to-human “progression.” Variations of all kinds have been made of this depiction, some with a humorous spirit, but most to ridicule the monkey-to-man theory.

A linear depiction of evolution may, consciously or not, confirm false preconceptions about evolution, such as intelligent design – the idea that life has an intelligent creator behind it. Historians can work to unravel how such a simple caricature could have helped distort Darwin’s theory. Meanwhile, science writers and educators face the challenge of explaining the gradual branching processes that explain the diversity of life.

While less pithy, it might be better for the public’s knowledge of science if these T-shirts and bumper stickers ditch the step by step images and use branching diagrams to make a more nuanced and correct point about evolution. Contrary to the Sambourne picture, evolution is better represented as a process producing continuous branching and divergence of populations of organisms.

Bottom line: Evolution does not proceed as an orderly march toward a preordained finish line.