Evolution insights from a walking cavefish

Fish evolved into the first land vertebrates 420 million years ago. Clues to that fins-to-limbs transformation may lie in a walking blind cavefish in Thailand.

A blind cavefish species in Thailand has evolved a unique ability to walk and climb like a salamander. It’s the kind of adaptation that might have occurred about 420 million years ago, when fish fins evolved into limbs suited for moving on land. A paper about the unusual anatomy of this fish was published in the March 24, 2016 issue of Nature Scientific Reports.

Brooke Flammang, from the New Jersey Institute of Technology, is the lead author of the study. She spoke about the cavefish, Cryptotora thamicola, in a video that was posted on YouTube.

What I think is super-exciting about these fish is that, because they’re in this high flow environments, they have fin structures unlike any fish that I have ever seen anywhere. Out of the 30,000 species of fishes that we know to exist, these fish are truly spectacular and look different from everything else we’ve ever seen.

They are able to climb up rock faces in very much the same way that salamanders do. So, from an evolutionary perspective, this is a huge finding. This is one of the first fish we have that is a living species that acts in a way that we think fishes must have acted when they evolved from a fluid environment to a terrestrial environment at the very beginning of the fin-to-limb transition when the first limbs evolved in our earliest ancestors.

Cryptotora thamicola are found in northern Thailand, living in caves where there’s fast-moving water. They are usually seen climbing rock faces in the cascading water, and have even been observed moving while exposed to air on wet surfaces.

The cavefish evolved to become sightless, having no need for vision in the darkness of their subterranean home. In a food-scarce environment, energy that would have been spent on functional eyes are instead redirected to enhance other senses needed to find food and breeding mates in the dark.

Some fish species are able to move on land. Mudskippers use their pectoral fins for support, to drag themselves over mud and wet sand. Eels can move on the ground over short distances from one freshwater habitat to another using snake-like undulations.

Cryptotora thamicola, however, walks with a salamander-like gait, a motion that’s not been observed in other known living fish species. That gait is due to a pelvic girdle resembling that of tetrapods, four-legged terrestrial vertebrates. No other present-day fish species have this structure. It appears that evolution may have repeated an adaptation that first came about around 420 million years ago when fins on fish evolved into limbs that enabled the first vertebrate land animals to emerge from the sea.

In a statement, Flaming commented:

It possesses morphological features that have previously only been attributed to tetrapods. The pelvis and vertebral column of this fish allow it to support its body weight against gravity and provide large sites for muscle attachment for walking. This research gives us insight into the plasticity of the fish body plan and the convergent morphological features that were seen in the evolution of tetrapods. 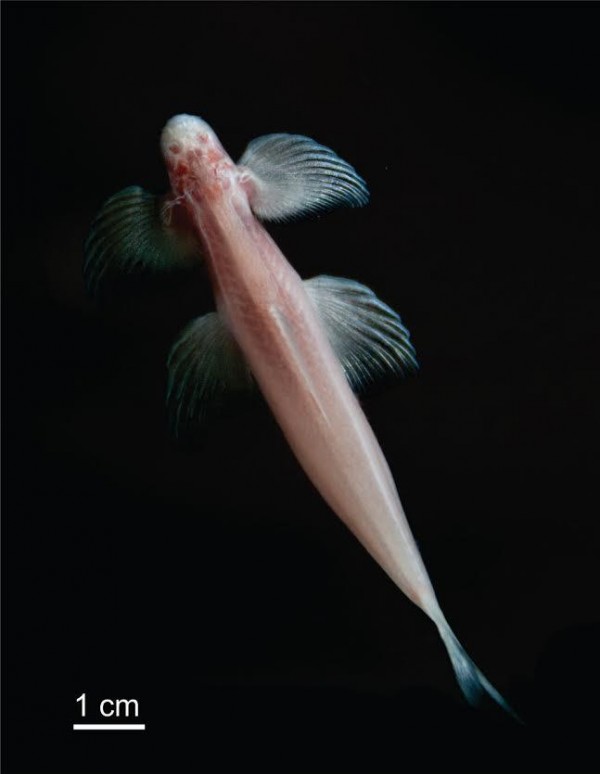 Bottom line: Cryptotora thamicola, a blind cavefish species in northern Thailand can walk and climb up rock faces in subterranean rapids with a salamander-like gait. It may be the same kind of adaptation that occurred about 420 million years ago when fins on fish evolved into limbed appendages that ushered the emergence of land-dwelling vertebrate animals.