The origin of digits in land vertebrates is hotly debated, but a new study suggests that human hands likely evolved from the fins of Elpistostege, a fish that lived more than 380 million years ago.

Image via Katrina Kenny/ The Conversation.

One of the most significant events in the history of life was when fish evolved into tetrapods, crawling out of the water and eventually conquering land. The term tetrapod refers to four-limbed vertebrates, including humans.

To complete this transition, several anatomical changes were necessary. One of the most important was the evolution of hands and feet.

Working with researchers from the University of Quebec, in 2010 we discovered the first complete specimen of Elpistostege watsoni. This tetrapod-like fish lived more than 380 million years ago, and belonged to a group called elpistostegalians.

Our research based on this specimen, published today in Nature, suggests human hands likely evolved from the fins of this fish, which we’ll refer to by its genus name, Elpistostege.

Elpistostegalians are an extinct group that displayed features of both lobe-finned fish and early tetrapods. They were likely involved in bridging the gap between prehistoric fish and animals capable of living on land.

Thus, our latest finding offers valuable insight into the evolution of the vertebrate hand. 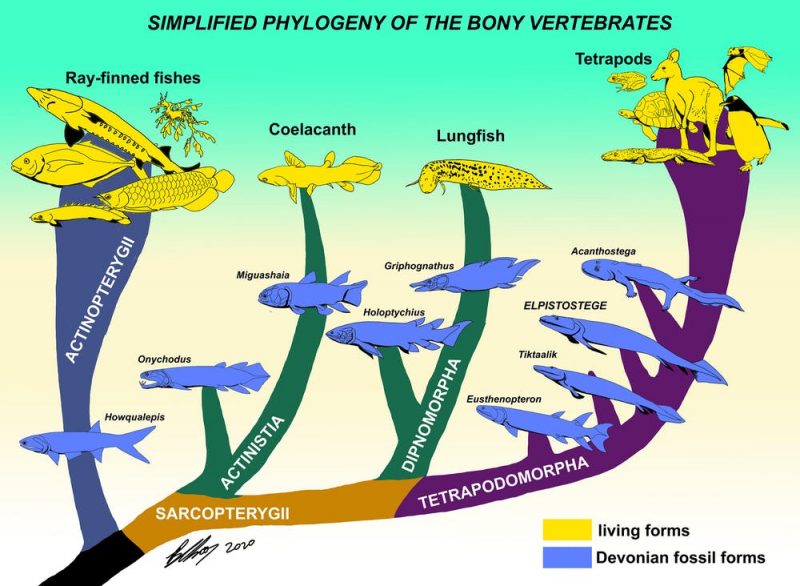 Elpistostege, from the Late Devonian period of Canada, is now considered the closest fish to tetrapods (4-limbed land animals), which includes humans. Image via Brian Choo/ The Conversation.

The best specimen we’ve ever found

To understand how fish fins became limbs (arms and legs with digits) through evolution, we studied the fossils of extinct lobe-finned fishes and early tetrapods.

Lobe-fins include bony fishes (Osteichthyes) with robust fins, such as lungfishes and coelacanths.

Elpistostegalians lived between 393–359 million years ago, during the Middle and Upper Devonian times. Our finding of a complete 1.57 meter (5-foot) Elpistostege – uncovered from Miguasha National Park in Quebec, Canada – is the first instance of a complete skeleton of any elpistostegalian fish fossil.

This animation shows what Elpistostege might have looked like when alive, and highlights the close similarities in its pectoral fin skeleton to the bones of our human arm and hand.

Prior to this, the most complete elpistostegalian specimen was a Tiktaalik roseae skeleton found in the Canadian Arctic in 2004, but it was missing the extreme end part of its fin.

The origin of digits in land vertebrates is hotly debated.

The tiny bones in the tip of the pectoral fins of fishes such as Elpistostege are called “radial” bones. When radials form a series of rows, like digits, they are essentially the same as fingers in tetrapods.

The only difference is that, in these advanced fishes, the digits are still locked within the fin, and not yet free moving like human fingers.

We believe this is the first evidence of digit bones found in a fish fin with fin-rays (the bony rays that support the fin). This suggests the fingers of vertebrates, including of human hands, first evolved as rows of digit bones in the fins of elpistostegalian fishes. 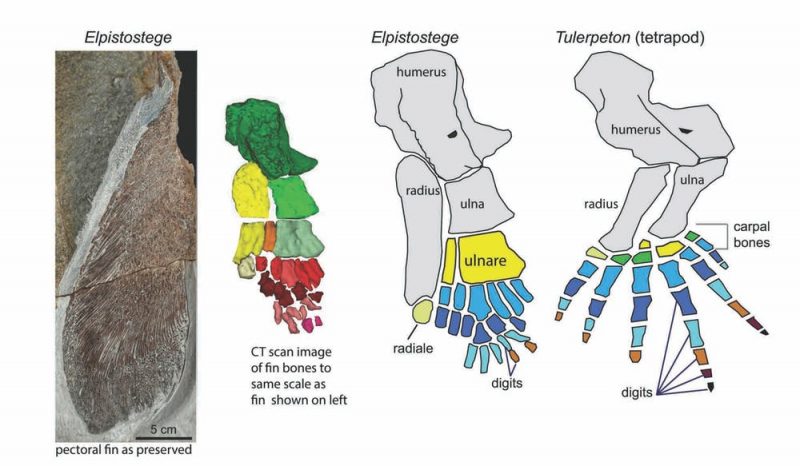 The pectoral fin of Elpistostege shows the short rows of aligned digits in the fin, an intermediate stage between fishes and land animals such as the early tetrapod Tulerpeton. Image via The Conversation.

From an evolutionary perspective, rows of digit bones in prehistoric fish fins would have provided flexibility for the fin to more effectively bear weight.

This could have been useful when Elpistostege was either plodding along in the shallows, or trying to move out of water onto land. Eventually, the increased use of such fins would have lead to the loss of fin-rays and the emergence of digits in rows, forming a larger surface area for the limb to grip the land surface.

Our specimen shows many features not known before, and will form the basis of a series of future papers describing in detail its skull, and other aspects of its body skeleton.

Elpistostege blurs the line between fish and vertebrates capable of living on land. It’s not necessarily our ancestor, but it’s now the closest example we have of a “transitional fossil”, closing the gap between fish and tetrapods.

Our new specimen of Elpistostege watsoni measures 5.15 feet (1.57 meters) long from its snout to the tip of its tail. Image via Richard Cloutier/ UQAR/ The Conversation.

The first Elpistostege fossil, a skull fragment, was found in the late 1930s. It was thought to belong to an early amphibian. In the mid 1980s the front half of the skull was found, and was confirmed to be an advanced lobe-finned fish.

The original finds of the Elpistostege skull roof (left) and front half of the skull. The new specimen confirms these all belong to the one species. Image via Richard Cloutier/ UQAR/ The Conversation.

Our new, complete specimen was discovered in the fossil-rich cliffs of the Miguasha National Park, a UNESCO World Heritage site in Eastern Canada. Miguasha is considered one of the best sites to study fish fossils from the Devonian period (known as the “Age of Fish”), as it contains a very large number of lobe-finned fish fossils, in an exceptional state of preservation.

Bottom line: A new study suggests that human hands likely evolved from the fins of Elpistostege, a fish that lived more than 380 million years ago.