El Niño this year: What will it bring?

An El Niño is building that’s expected to culminate in the fall and last until the winter and could possibly become a “mega” El Niño.

As the summer ends, heat is dominating the meteorological landscape, with the warmest month ever recorded and the drought continuing unabated in California. At the same time, it is clear that an El Niño is building that is expected to culminate in the fall and last until the winter, with the possibility of it becoming a “mega” El Niño.

The hope in California is that the large amounts of precipitation usually associated with extreme El Niño events would lessen the impacts of the state’s multi-year drought by partly refilling reservoirs and groundwater, even as scientists caution that this might not happen to the degree needed to alter the present situation.

What drives the El Niño weather pattern and what do scientists know about El Niño under man-made greenhouse warming?

To be clear, El Niño is a tropical Pacific phenomenon, even though it represents the strongest year-to-year meteorological fluctuation on the planet and disrupts the circulation of the global atmosphere. When sea surface temperature changes – or anomalies – in the eastern equatorial Pacific exceed a certain threshold, it becomes an El Niño.

What are the mechanisms behind El Niño? In normal conditions in the tropical Pacific, the trade winds blow from east to west, driving ocean currents westwards underneath. These currents transport warm water that is heated by low-latitude solar radiation and eventually piles up in the western Pacific. As a result, heat accumulates in the upper ocean. 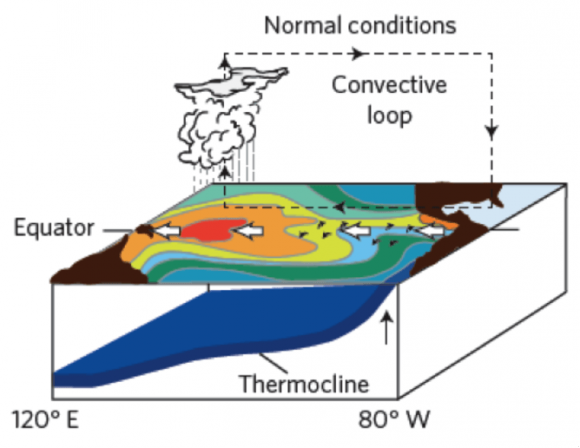 The warm water evaporates from the ocean surface, and the light, warm and humid air rises, leading to deep convection in the form of towering cumulonimbus clouds and heavy precipitation. As this air ascends, it reaches upper levels of the troposphere and returns eastwards to eventually sink over the cooler water of the eastern Pacific. This east-west (zonal) circulation is called the Walker Circulation.

What happens to the atmosphere and the ocean during El Niño?

This circulation gets disrupted every few years by El Niño or enhanced by La Niña, the opposite effect. This periodic, naturally occurring phenomenon is called the El-Niño Southern Oscillation (ENSO).

During the typical El Niño, the warm phase of that oscillation, the trade winds weaken, and episodic westerly wind bursts in the western equatorial Pacific generate internal waves into the ocean. These waves trigger the transport of the warm water from the west to the east of the basin. 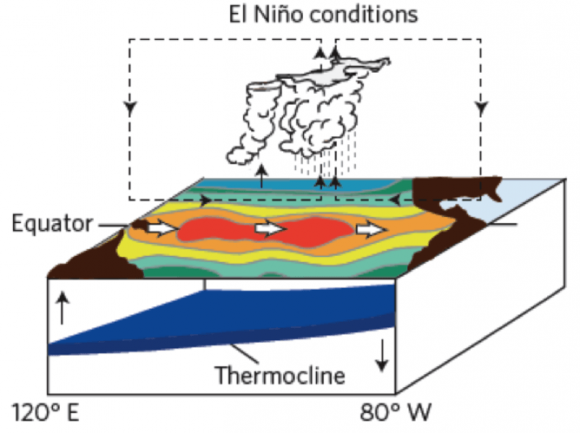 This induces a reduction of the upwelling (upward motion) of cold water in the east, at the equator and along the coast. It also creates warm sea surface temperature anomalies along the equator from the international dateline in the Pacific to the coast of South America.

As the central part of the Pacific warms up during El Niño, the atmospheric convection that normally occurs over the western warm pool migrates to the central Pacific. That transfer of heat from the ocean to the atmosphere gives rise to extraordinary rainfall in the normally dry eastern equatorial Pacific. Warm air then flows from the west, feeding this convection and further weakening the east-west-flowing trade winds. This leads to further warming as this feedback loop amplifies the phenomenon and ensures that deep atmospheric convection and rainfall patterns are maintained in the central equatorial Pacific. El Niño eventually ends when changes in the ocean cause negative feedbacks that reverse the dynamics that create the El Niño effects.

How can El Niño affect weather in United States and rainfall in California?

In association with El Niño, the heat redistribution in the ocean creates a major reorganization of atmospheric convection, severely disrupting global weather patterns from Australia to India and from South Africa to Brazil.

What explains the specific effect on the US and California, however, is a particular type of connection – called extratropical teleconnections – between the heating generated by El Niño and North America. This heating excites wave trains, or groups of similar-sized atmospheric waves, that propagate northward, connecting the central equatorial Pacific to North America. This shifts the subtropical jet stream northward and induces a series of storms over California and the southern US, in general. The increased precipitation that ensues seems to only occur during a strong El Niño.

While El Niños have a rather “typical” signature in the tropics, their impacts over North America vary because other influences act in temperate climates. Nevertheless, most El Niño winters are mild over western Canada and parts of the northern central United States, and wet with anomalous precipitation over the southern United States from Texas to Florida.

How might El Niño evolve under man-made greenhouse warming?

Scientists are now studying the diversity in El Niño behavior – strong and weak ones, changes in duration, and the different regions for the maximum SST anomalies. Are these changes to El Niño related to global warming? It is too early to say.

For one thing, there is significant natural variability in the Pacific over the decade-length and longer time scales, which could be masking changes driven by global warming.

Climate models do suggest that the mean conditions in the Pacific will evolve toward a warmer state. That means sea surface temperatures are likely to rise and the trade wind to weaken, which could lead to a more permanent El Niño state and/or more intense El Niño events.

Some climate model projections, together with reconstructions of past El Niños, provide empirical support for more extreme El Niño events under greenhouse warming. They also point toward an eastward shift of the center point where heat from the ocean transfers to the air. This would mean an eastward shift of extratropical rainfall teleconnections, the phenomenon responsible for weather changes in North America, including more rain in the West.

But models diverge in their predictions of whether and how the teleconnections’ intensity will change. So there is no simple answer to how precipitation will change in California in association with changes of El Niño related to greenhouse warming.

A complex phenomenon with many tricks for scientists

Will the sensitivity of the atmosphere to the primary mechanism at the heart of El Niño – that is, feedback between the higher sea temperatures and slowing trade winds, leading to atmospheric convection over the central Pacific – continue in the future?

It was not maintained during 2014, when otherwise favorable conditions for a big El Niño were present. In that case, persistent deep convection did not occur in the central Pacific, and the usual strong interaction between the atmosphere and the ocean there failed to play its normal role in anchoring the convection and heat transfer.

These results show us that we still have much to learn. This is true despite the dramatic scientific progress that has been accomplished over the last few decades regarding El Niño and ENSO cycles, including new theories, sophisticated seasonal forecasting models and extensive observation systems.

Our ability to predict El Niño and the potential connections between increasing greenhouse gases and El Niño is still limited by the complexity of the ENSO dynamics, as exemplified by the failed prediction of a 2014 El Niño. In the meantime, we can look forward to a winter when El Niño, perhaps even a mega El Niño, will dominate the weather discussion.