The retreat of Arctic sea ice is diminishing Earth’s albedo, or reflectivity, by an amount about twice as large as previously thought. 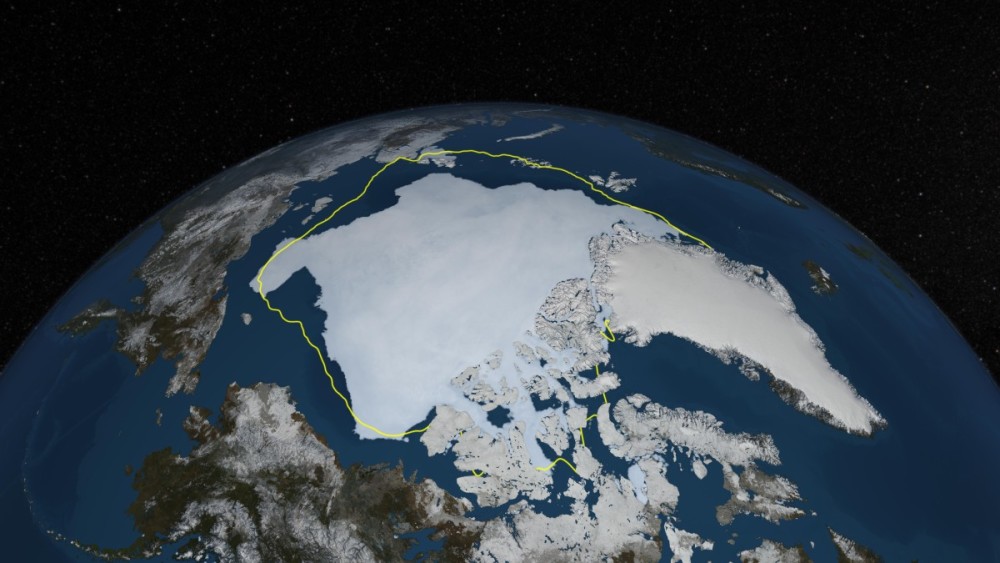 The retreat of sea ice in the Arctic is diminishing Earth’s albedo, or reflectivity, by an amount considerably larger – about twice as large – as that estimated in previous studies. That’s according to a new study using data from several NASA satellites, whose results were announced today (February 18, 2014). As the sea ice melts, the Arctic’s icy white reflective surface is replaced by a relatively dark ocean surface. This change diminishes the amount of sunlight being reflected back to space, causing Earth to absorb an increasing amount of solar energy, thereby creating additional warming.

Researchers at Scripps Institution of Oceanography, at the University of California, San Diego, conducted the study. They used data from the Clouds and Earth’s Radiant Energy System, or CERES, instrument on several NASA satellites.

They say the Arctic has warmed by 3.6 F (2 C) since the 1970s. The summer minimum Arctic sea ice extent has decreased by 40 percent during the same time period. These factors have decreased the region’s albedo, or the fraction of incoming light that Earth reflects back into space. The CERES instruments are able to measure this change.

Scripps graduate student Kristina Pistone and climate scientists Ian Eisenman and Veerabhadran Ramanathan used satellite measurements to calculate Arctic albedo changes associated with the changing sea ice cover. Albedo is measured as a percentage. A perfectly black surface has an albedo of zero percent and a perfectly white surface has an albedo of 100 percent. The albedo of fresh snow is typically between 80 and 90 percent whereas the albedo of the ocean surface is less than 20 percent. Clouds and other factors, like aerosols and black carbon, also influence the albedo of Earth.

The researchers calculated that the overall albedo of the Arctic region fell from 52 percent to 48 percent between 1979 and 2011. The magnitude of surface darkening is twice as large as that found in previous studies. They also compared their results to model simulations to assess the capability of computer models to portray and forecast albedo changes.

Read more about the new study on Arctic albedo from NASA

The video below uses the “Daisyworld” model to explain basic Earth science concepts, such as albedo and feedback loops. James Lovelock – who is known for his Gaia hypothesis – and Andrew Watson first used the concept of a “Daisyworld” in a paper published in 1983.

Bottom line: The retreat of sea ice in the Arctic is diminishing Earth’s albedo, or reflectivity, by an amount about twice as large as previously thought.