In fact, these researchers said, the moon flies through Earth’s outermost atmosphere, called its geocorona. 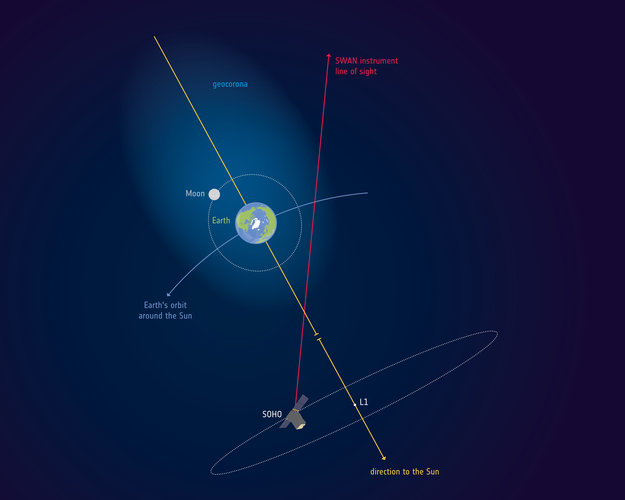 The outermost part of Earth’s atmosphere – called the geocorona – extends outward almost twice as far as the moon’s orbit. Artist’s concept via ESA.

The European Space Agency (ESA) said on February 20, 2019, that 20-year-old data from the space-based SOHO observatory has revealed an amazing fact about the Earth. The data have shown that the outermost part of Earth’s atmosphere – called its geocorona – extends beyond the moon’s orbit.

This gaseous geocorona – a cloud of hydrogen atoms, made faintly luminous in the far-ultraviolet via scattered sunlight – was known to exist. But no one knew it reached so far into space. It extends nearly twice as far as the moon’s orbit, nearly 400,000 miles (630,000 km), or 50 times Earth’s own diameter.

Igor Baliukin of Russia’s Space Research Institute led this research. He commented in a statement:

The moon flies through Earth’s atmosphere.

SOHO stands for Solar and Heliospheric Observatory. The mission was launched in 1995 as a joint project by ESA and NASA, with a projected two-year lifespan. Now, 24 years later, the craft is still in space and still studying the sun and sun-Earth environment. It orbits the L-1 point in the Earth-sun system.

One of SOHO’s instrument, called SWAN, provided the data on Earth’s geocorona. SWAN’s sensors traced the hydrogen in the geocorona and precisely detected where it dwindled to nothing. 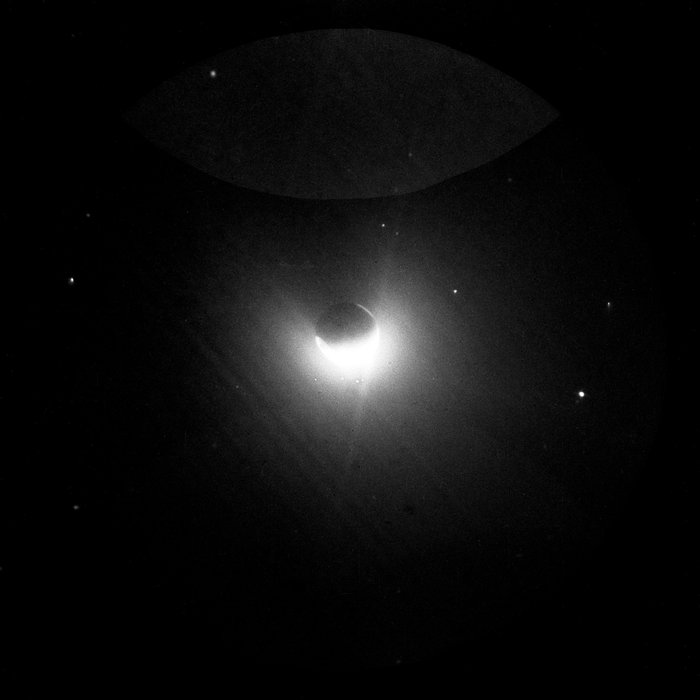 Apollo 16 astronauts on the moon acquired this ultraviolet image of Earth and its hydrogen envelope, or geocorona, in 1972. Image via ESA.

The evocative image above is a very interesting and historic one of Earth’s geocorona. It comes from the first telescope on the moon, placed by Apollo 16 astronauts in 1972. The image shows the geocorona surrounding Earth and glowing brightly in ultraviolet light. Jean-Loup Bertaux is the former principal investigator of SWAN, and he’s a co-author of the new paper. He commented:

At that time, the astronauts on the lunar surface did not know that they were actually embedded in the outskirts of the geocorona.

By the way, we skywatchers sometimes see a similar-looking corona around the moon or sun. But that’s an entirely different phenomenon, with the glow caused by Earth’s own air, not by any extended lunar or solar atmosphere.

Read more about this new study from ESA 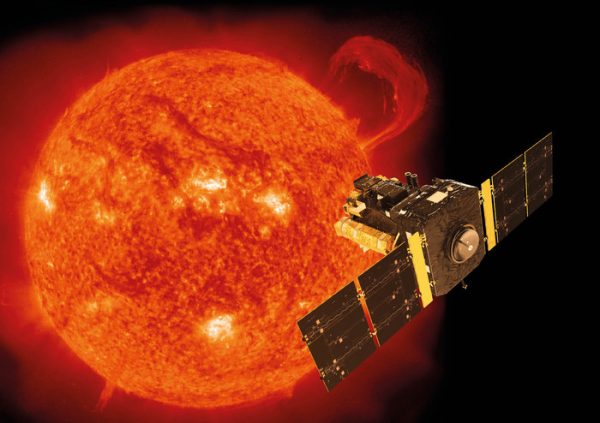 Artist’s concept of the ESA/NASA Solar and Heliospheric Observatory (SOHO), superimposed on a real image of the sun as seen by SOHO’s extreme-ultraviolet imaging telescope on in 1999. Image via ESA.

Bottom line: Scientists used data from the SWAN instrument on the SOHO spacecraft to learn that the outermost part of Earth’s atmosphere – called the geocorona – extends outward almost twice as far as the moon’s orbit.