A new study suggests that humans, not climate change, were the primary cause of extinction of the huge and astonishing creatures that roamed Australia 45,000 years ago. 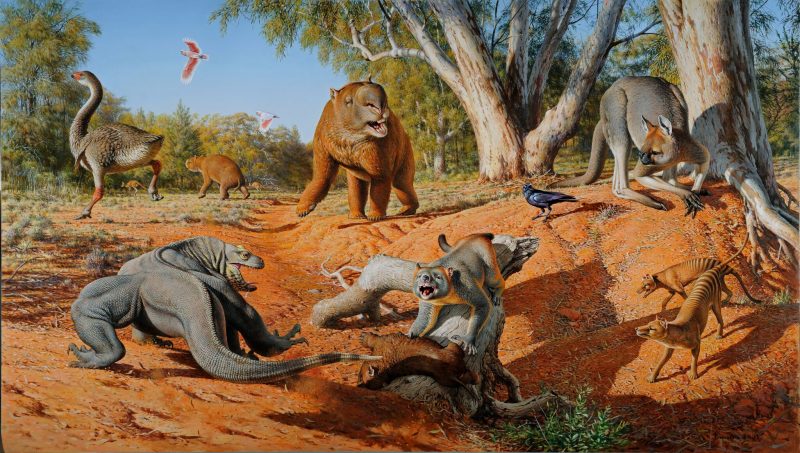 There’s new evidence that some of the large creatures that once roamed Australia – what scienitsts call Australia’s ancient megafauna – didn’t disappear due to climate change as had been proposed earlier. Instead, the evidence suggests that humans were the primary cause of these unique creatures’ sudden extinction some 45,000 years ago. Prior to that time, were 1,000-pound kangaroos in Australia, 2-ton wombats, 25-foot-long lizards, 400-pound flightless birds, 300-pound marsupial lions and Volkswagen-sized tortoises. After that time, those huge creatures had disappeared.

A science team led by Sander van der Kaars of Monash University in Australia used information from a sediment core drilled in the Indian Ocean off the coast of southwest Australia to help reconstruct past climate and ecosystems on the Australian continent. The core contains layers of material blown and washed into the ocean over time, and so looking deeper in the sediments is the same as looking deeper into the past. The team’s paper on this subject was published online January 20, 2017 in the peer-reviewed journal Nature Communications.

Gifford Miller at the University of Colorado Boulder (CU Boulder) was a member of the research team. He said in a statement from CU Boulder that the sediment core let scientists look back more than 150,000 years, a time period spanning Earth’s last full glacial cycle.

He said the sediments his team exacontained dust, pollen, ash and spores from a fungus called Sporormiella, which can still be found today in the dung of domestic livestock. In the past, as now, this spore thrived on the dung of plant-eating mammals. Miller said his team found the spores in abundance in the sediment layers from 150,000 years ago to about 45,000 years ago. Then, suddenly, the number of spores in the sediments went into a nosedive. He added:

The abundance of these spores is good evidence for a lot of large mammals on the southwestern Australian landscape up until about 45,000 years ago. Then, in a window of time lasting just a few thousand years, the megafauna population collapsed. 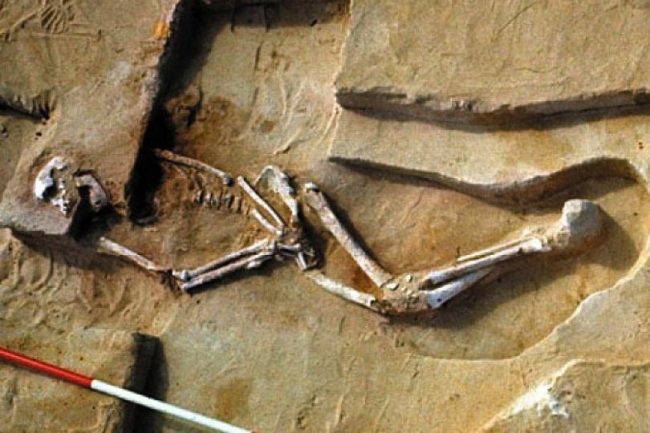 In 1974, geologist Jim Bowler found the remains of a 40,000-year-old skeleton which has been named Mungo Man. This skeleton still represents the oldest human ever uncovered on the Australian continent. Photo via Wikimedia Commons/ International Business Times.

This isn’t Miller’s first foray into the world of early humans in Australia, and the results of their hunting. In 2016, he used burned eggshells of the 400-pound bird, Genyornis, as the first direct evidence that humans actually preyed on the Australian megafauna.

In the current study, the ocean sediment core showed the southwest of Australia is one of the few regions on the continent that had dense forests both 45,000 years ago and today. Miller said those forests would make that region a hotbed of biodiversity, adding:

It’s a region with some of the earliest evidence of humans on the continent, and where we would expect a lot of animals to have lived. Because of the density of trees and shrubs, it could have been one of their last holdouts some 45,000 years ago. There is no evidence of significant climate change during the time of the megafauna extinction.

According to the CU Boulder statement, scientists have been debating the causes of the Australian megafauna extinctions for decades:

Some claim the animals could not have survived changes in climate, including a shift some 70,000 years ago when much of the southwestern Australia landscape went from a wooded eucalyptus tree environment to an arid, sparsely vegetated landscape.

Others have suggested the animals were hunted to extinction by Australia’s earliest immigrants who had colonized most of the continent by 50,000 years ago, or a combination of overhunting and climate change.

But Miller believes now that humans were the primary cause of the extinction, which might have been caused by what he called imperceptible overkill. He bases that idea on a 2006 study by Australian researchers, which indicated that even low-intensity hunting of Australian megafauna – like the killing of one juvenile mammal per person per decade – could have resulted in the extinction of a species in just a few hundred years. Sander van der Kaars, the study leader, said:

The results of this study are of significant interest across the archaeological and Earth science communities and to the general public who remain fascinated by the menagerie of now extinct giant animals that roamed the planet – and the cause of their extinction – as our own species began its persistent colonization of Earth.

They’re also food for thought for anyone who believes that the activities of a few or a lot of humans can’t have a large effect on the environment. 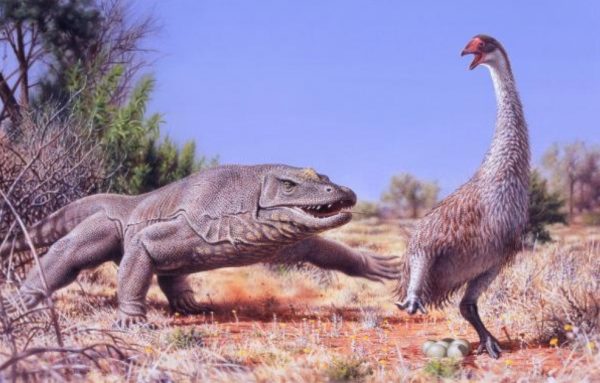 Bottom line: A new study suggests that humans, not climate change, were the primary cause of extinction of Australian megafauna, around 45,000 years ago.