New analyses of satellite data show that the start of the spring growing season in northern Europe has advanced by 0.3 days per year from 2000 to 2016.

These new research results on spring phenology changes in northern Europe were published in the June 2019 issue of the International Journal of Biometeorology.

Phenology has been defined as the study of nature’s calendar. When flowers bloom in the spring, when birds migrate north to breed, when deciduous forests turn colors in the fall, when bats and bears hibernate at the onset of winter; these cyclical seasonal phenomena as well as many others are encompassed within the broad scope of phenology. Because many of these cycles are sensitive to temperature cues, climate warming can cause subtle alterations in them.

Presently, a number of direct observations of vegetation growth have shown that the start of the growing season has advanced at several locations across western Europe. To get a broader view of the changes that are occurring in this region, a team of scientists from Sweden turned their attention to satellite data.

The scientists used a new index called the plant phenology index (PPI), which is better at dealing with snow and better at capturing changes in leaves within dense canopies than traditional indices, to study changes in the start of the spring growing season across all of northern Europe. Studies to date using traditional indices have obtained inconsistent results about changes in spring phenology across Europe and the Northern Hemisphere. The new PPI was calculated with satellite data obtained by MODIS (Moderate Resolution Imaging Spectroradiometer), which is an instrument installed on NASA’s Terra and Aqua satellites. MODIS captures imagery data at every location on Earth every one to two days. The PPI data have been shown to be highly correlated with the gross primary productivity of vegetation.

The PPI analyses showed that the start of the spring growing season has advanced by 0.3 days per year over 2000 to 2016 in northern Europe. While both variations in temperature and precipitation contributed to these changes, the phenology changes were most sensitive to subtle changes in temperature. The scientists estimate the start of the growing season in northern Europe has a sensitivity of about 2.47 days per degree Celsius (1.8 degrees Fahrenheit). Similar sensitivity estimates for other regions around the world currently range from 2.2 to 7.5 days per degree Celsius. 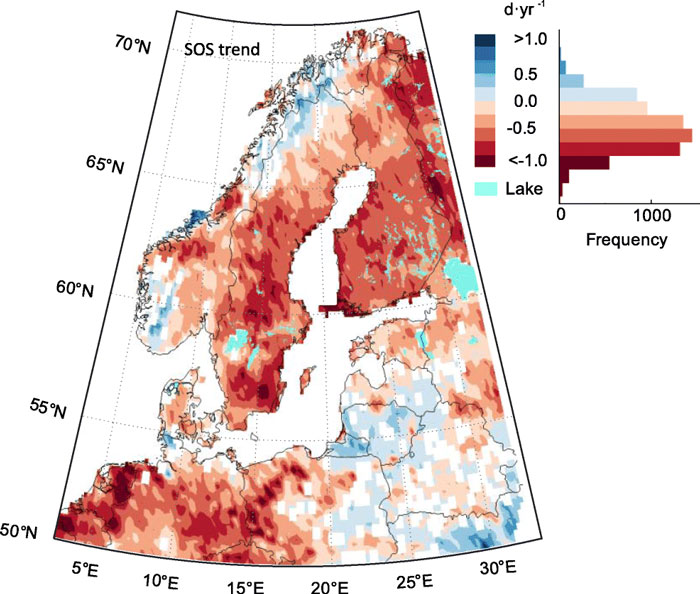 Collectively, these studies are enabling scientists to better forecast how vegetation will respond to a warming climate. In particular, earlier growing seasons may be a concern to farmers because fragile orchards that bloom too early may suffer frost damage. Problems may also arise because of mismatches between the timing of peak plant food availability and the activities of hungry animals.

Hongxiao Jin, lead author of the new study, is a postdoctoral fellow in the Department of Physical Geography and Ecosystem Science at Lund University. Coauthors of the paper included Anna Maria Jönsson, Cecilia Olsson, Johan Lindström, Per Jönsson, and Lars Eklundh.

Bottom line: Spring is coming earlier to northern Europe according to new research from Swedish scientists.