We promise you won’t be eaten by a megalodon

So go ahead and get scared at the new movie “The Meg,” but don’t worry. Scientists have officially debunked the myth that megalodon sharks still exist.

Via “The Meg”: Official Trailer.

If you’re planning to go see the new summer blockbuster movie “The Meg” this weekend, be scared in the theater – but you don’t need to worry at the beach. Scientists have officially debunked the myth that megalodon sharks still exist. The whale-eating monsters became extinct about 2.6 million years ago.

Catalina Pimiento, of Florida Museum of Natural History at University of Florida, is lead author of a study, published in the peer-reviewed journal PLOS ONE that determined the date of extinction for Carcharocles megalodon – the largest predatory shark to ever live. Pimiento said in a statement:

I was drawn to the study of Carcharocles megalodon’s extinction because it is fundamental to know when species became extinct to then begin to understand the causes and consequences of such an event.

I also think people who are interested in this animal deserve to know what the scientific evidence shows, especially following Discovery Channel specials that implied megalodon may still be alive. 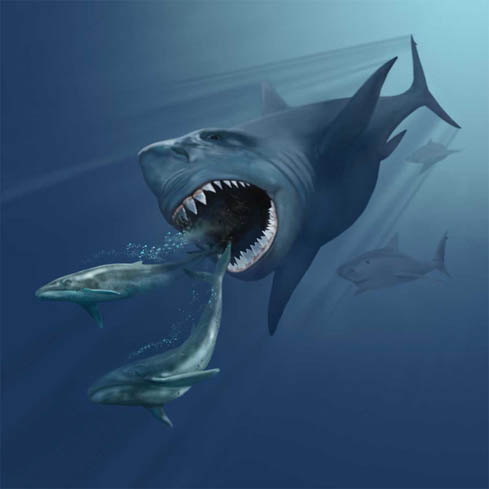 Scientists think that megalodon looked like a stockier version of the great white shark, with strong, thick teeth, built for grabbing prey and breaking bone. Regarded as one of the largest and most powerful predators to have ever lived, fossil remains of megalodon suggest that this giant shark reached a length of about 60 feet (18 meters). Their large jaws could exert a bite force of up to 24,000 – 41,000 lbf (110,000 to 180,000 newtons). 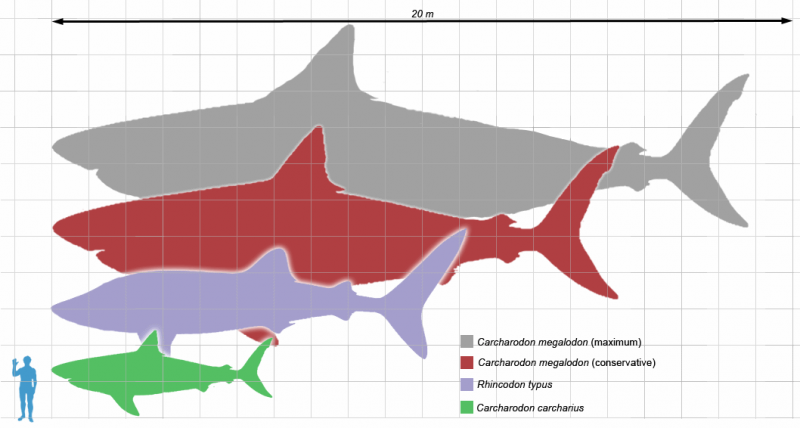 Size comparison of Carcharodon carcharias or great white shark (green), and current maximum estimate of the largest adult size of Carcharodon megalodon (gray), with a human. Image via Wikipedia.

Pimiento said that because modern top predators, especially large sharks, are significantly declining worldwide due to the current biodiversity crisis, this study could help serve as a basis to better understand the consequences of these changes.

When you remove large sharks, then small sharks are very abundant and they consume more of the invertebrates that we humans eat. Recent estimations show that large-bodied, shallow-water species of sharks are at greatest risk among marine animals, and the overall risk of shark extinction is substantially higher than for most other vertebrates.

Pimiento plans to further investigate possible correlations between changes in megalodon’s distribution and the evolutionary trends of marine mammals, such as whales and other sharks. She said:

For the study, researchers used databases and scientific literature of the most recent megalodon records and calculated the extinction using a mathematical model.

Read more from the University of Florida