Did glaciers lure wolves back to California?

More than 90 years after California’s last wolf was killed, a pack has been observed near Mt. Shasta. Are the mountain’s glaciers a reason the wolves chose this location? 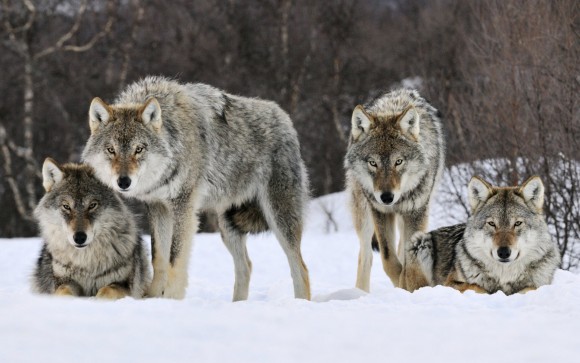 After more than 90 years since the last wolf in California was killed, a pack was recently observed near Mt. Shasta. Its presence was established by photographs taken earlier this month by trail cameras managed by the California Department of Fish and Wildlife (CDFW). These images show five gray wolf pups and two adults in southeastern Siskiyou County in the northern part of the state.

CDFW had recently increased its trail camera program in this area, when a camera captured images in May and July of this year of a large black dog-like animal, almost certainly a wolf; tracks of this animal, found on a road close to the camera, also looked wolf-like in size and shape.

The most recent photographs unambiguously show wolves. The close association of the adults and pups has led the CDFW to identify them as related; they have designated them as the Shasta Pack, using the name of the large glacier-covered peak nearby. CDFW personnel are eager to obtain scat samples to perform DNA analysis, which would allow them to establish the relations of the new wolves to other packs in the western US. 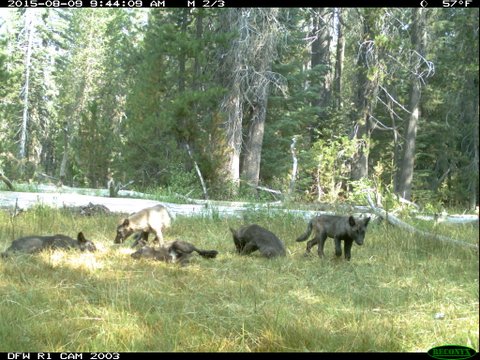 The 5 wolf pups of the Shasta Pack. Image credit: CDFG

The discovery of the pack is a major step forward for wildlife conservation, since it shows that a major predator is advancing on a pathway to reestablish itself across the vast sections of its historic range in North America. The animals, once common in the state, were eliminated by 1924 through a government-funded program.

This news is exciting for California. We knew wolves would eventually return home to the state and it appears now is the time. 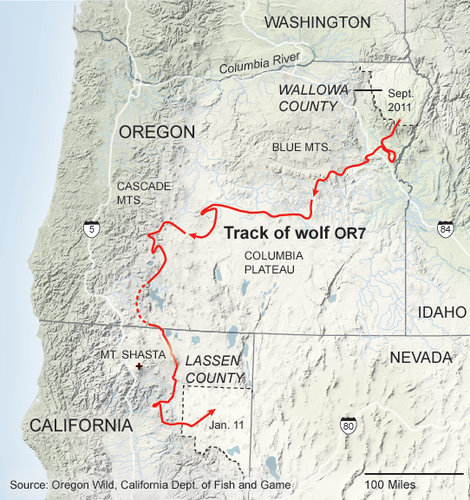 Route taken by Wolf OR-7 on his first trip from Oregon into California, showing his path close to Mt. Shasta. Image credit: NYTimes

CDFW had been on the alert for wolves since 2011, when a single male individual, known as OR-7, entered the state from Oregon. His code indicates that he was the seventh wolf to be collared in Oregon. This device allowed the recording of nearly all of his travels—a distance of over 1000 miles. He moved from his birth area in the Wallowa Mountains of northeastern Oregon into the southwestern part of the state, where he crossed into California, returned to Oregon, came back to California one more time, and then settled in southwestern Oregon. Cameras in Oregon identified him once again in 2014 and recorded three other members of his pack, a female and two pups. DNA analysis of their scat showed that he and the female were the parents of the pups. This pattern is typical of the behavior of subordinate males, who frequently travel widely to search for a female, and then remain in an established territory once they begin to raise young. The Shasta Pack may well be an example of this behavior as well, since the male in the pack looks like the solitary animal photographed earlier this year.

The precise location of the pack is being kept secret to protect the animals both from wildlife enthusiasts who might harass them in the effort to take photographs and from ranchers who fear that they will prey on their herds and could harm them. Along with generally positive comments about the news, some hostile messages have been posted on Reddit.

Recognizing these threats to the new pack, CDFW has held discussions with a stakeholder advisory group, and is drawing on these discussions for the Draft Wolf Management Plan currently under development. And the Natural Resource Defense Council, which has worked to promote techniques for ranchers to protect their livestock in other areas with wolf populations in the West, is offering concrete suggestions to reduce these tensions. 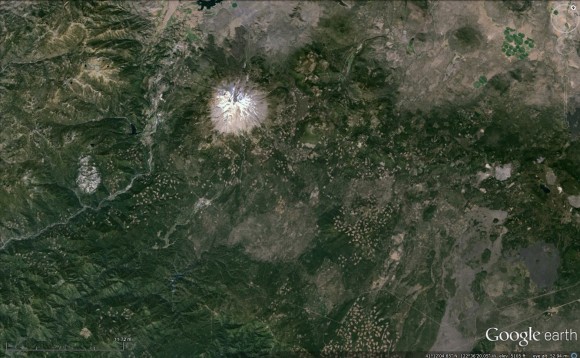 However, some information about its general location is available. The CDFW press releases place the animals within 10 or 15 miles of the summit of Mt. Shasta. Since the average size of wolf pack territories in the western U.S. average 200-500 square miles in area, they are likely to travel to the extensive slopes of Mt. Shasta.

Are the glaciers on Mt. Shasta one of the reasons that the adults, ranging south from Oregon, chose this specific location? Until there is a full database of sightings and tracks, and perhaps radio collar recordings, the precise movement of these animals will not be known. But two lines of evidence suggest an association of the Shasta Pack and Mt. Shasta’s glaciers, the most extensive in the state.

Recent conditions might make a glacier peak attractive. In the spring and summer of 2015, Oregon has been in drought conditions characterized as severe or extreme. Drought is commonly associated with reduced populations of key prey species for wolves. And mule deer and elk populations in Oregon are currently low. In this context, predators might be attracted to the relatively green vegetation on Mt. Shasta, supported by the peak’s abundant snowmelt in spring and early summer, and glacier meltwater in late summer. In a telephone interview, the ranger at McCloud Ranger Station in Shasta-Trinity National Forest, the station closest to Mt. Shasta, said that local wildlife densities are “more favorable than other parts” of the national forest. He added that he was “speaking as a hunter” who is familiar with the region and in contact with other hunters. He added that additional scientific information will be available when CDFW completes the studies of deer populations that it is currently conducting. 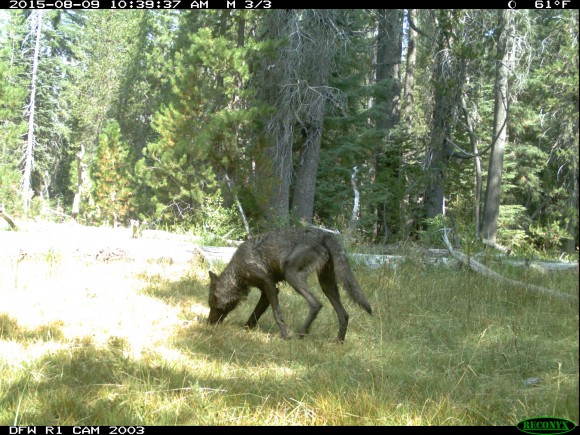 Historical patterns in other western states also show that the arrival of wolves has been associated with glaciers. Wolf packs were eliminated in Montana by the 1930s, though individual animals occasionally strayed across the state’s long border with Canada in the following decades. The first new pack in the state was established in 1979 near Glacier National Park. In Oregon, where the last wolf bounty was paid out in 1947, the first wolf pack in recent times was seen in 2006 in a range with glaciers– the Wallowa Mountains, OR-7’s home area. After the extermination of Washington State’s last wolf pack in the 1930s, the first pack in recent years in the state was recorded—also with a trail camera—in 2008 at Lookout Peak, in the glacier-rich North Cascades. Though patterns are less clear in Idaho and Wyoming (wolf recovery in those states is associated, not with spontaneous movements of wild individuals, but with the contentious federal reintroduction programs in Yellowstone National Park), the fact that wolves who entered four different western states all chose sites near glaciers suggests that these high moist areas with few human residents were attractive to them.

Future research may provide additional details of this association of glaciers and wolf introductions in the case of California. In the meantime, we may hope that the Shasta Pack remains healthy and unharmed, and that their offspring will spread to other areas of the state.