Near the Arctic Circle, in northern Alaska, is where forests give way to tundra. Researchers are looking at how the warming climate might affect the ecology of this northern boundary.

By Kevin Krajick. Reprinted with permission from State of the Planet

In northern Alaska’s Brooks Range, the earth as most of us know it comes to an end. From Fairbanks, the northernmost city on the North American road grid, drive up the graveled Dalton Highway. Unpeopled boreal forest stretches in all directions. About 200 miles on, you pass the arctic circle, beyond which the sun never sets in midsummer, nor rises in midwinter. Eventually, the trees thin out, and look scrawnier. The rolling landscape rises into big mountains, and you are threading through the bare, razor-edged peaks of the Brooks. Midway through the mountains, scattered spruces cling only to valley bottoms; further upslope is tundra, covered only with low-lying plants. At about 320 miles from Fairbanks, you pass the last little trees. Beyond lie the barren lands of the North Slope, ending at the industrial arctic-coast hamlet of Deadhorse and the oil fields of Prudhoe Bay—the only reason this road is here at all. 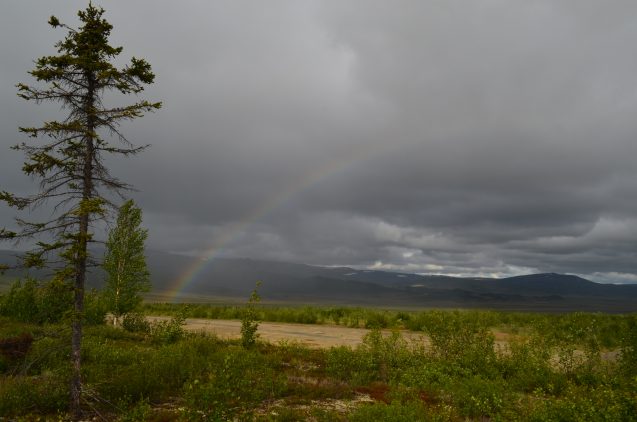 Near the arctic circle in northern Alaska, forests begin giving way to tundra. as cold air, frozen soils and lack of sunlight squeeze out trees. Researchers are investigating how warming climate may affect the ecology of this boundary. Photo via Kevin Krajick

The northern tree line, beyond which the climate is too harsh for trees to grow, circles all of earth’s northern landmasses for more than 8,300 miles. It is the largest ecological transition zone on the planet’s surface—a fuzzy boundary that actually loops north and south, and may appear gradual or sharp, depending on locale.

In the far north, climate is warming two to three times faster than the global average. As a result, both tundra and boreal forests are undergoing massive physical and biological shifts. But the details and the outlook remain unclear. Will warming cause forests to advance, pushing out the tundra? If so, how fast? Or will warming reduce the forests—and perhaps also tundra vegetation—by causing more wildfires and insect outbreaks? What will become of the countless birds and animals that depend on one or both environments? And will the huge amounts of carbon stored in the North’s frozen soils and its trees increase, or be released, to cause even more warming?

The tree line is the longest ecological transition zone on earth’s surface, circling through the northern landmasses of North America and Eurasia for some 8,300 miles. Here, the region beyond the trees is in red. At bottom right is Alaska, where researchers are now working in the area just beyond the arctic circle. Map courtesy of U.S. Fish and Wildlife Service

To help answer these questions, scientists from Columbia University’s Lamont-Doherty Earth Observatory and other institutions are engaged in a long-term project to sort out what allows trees to survive or not in this borderline environment. They have set up monitoring plots, conveniently located along the highway, at the edge of the trees. Here, instruments will continuously measure air and soil temperature, precipitation, wind speed, humidity and other parameters for the next several years, and compare these with the growth and survival of trees. The fieldwork is part of the larger Arctic Boreal Vulnerability Experiment (ABoVE), a multiyear NASA-sponsored project that seeks to combine large-scale satellite observations of the northern regions with these fine-scale ground studies. 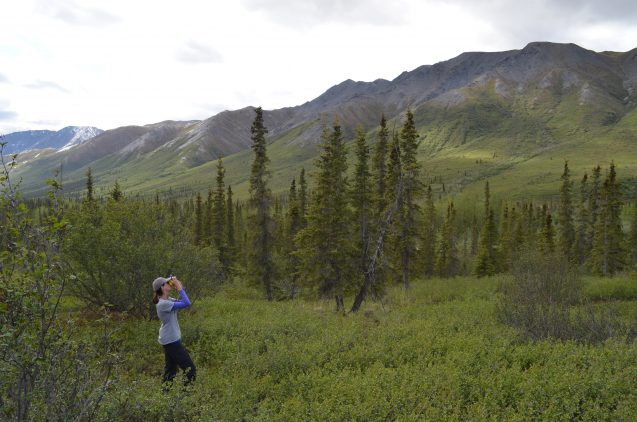 Natalie Boelman, an ecologist at Columbia University’s Lamont-Doherty Earth Observatory, measures the height of trees at one study plot. Image via Kevin Krajick.

There are many conditions that affect whether trees can and cannot grow.

The main one is heat; trees generally are viable only where the mean growing-season temperature is above about 6.4 degrees C (about 43.5 degrees F). But that is not the whole answer, said Griffin.

We also know it’s things like water, wind, nutrients, how much light is received, whether it’s direct or diffuse light, snow cover in the winter—it’s a complex combination. How that all works, that’s precisely what we’d like to find out.

Led by Jan Eitel, a forest scientist at the University of Idaho, the scientists arrived by pickup truck in early June to set up the plots. Almost no one lives between Fairbanks and Deadhorse, but they were able to put up at a lodge in the onetime gold-mining settlement of Wiseman, a mostly deserted huddle of cabins (current population about 20) dating from the early 1900s that lies near the highway. From here, the scientists commuted daily to a half-dozen sites, chosen for their sharp ecological edges; at each one, you could walk from the trees right into adjoining tundra, just slightly upslope. The most northerly plot is near a onetime modest landmark, the so-called Last Spruce, a starved-looking tree marked with a metal sign that said “Farthest North Spruce Tree on the Alaskan Pipeline – Do Not Cut.” A year or so ago, someone cut it down. 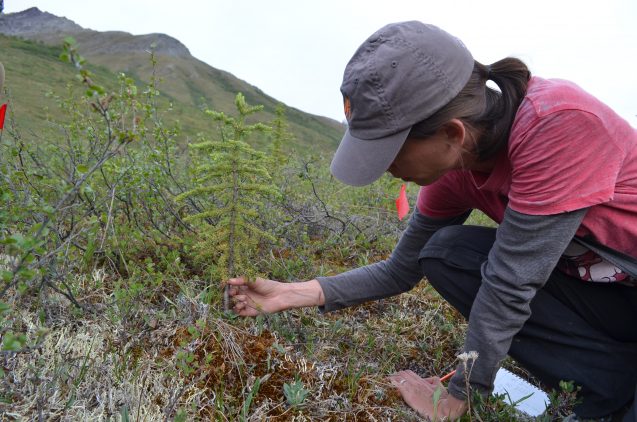 Trees grow very slowly here; this one that Boelman is examining is about 15 years old. Image via Kevin Krajick.

Part of the project involves mapping the sites with LiDAR, a surveying technology that shoots a pulsing laser to create an exquisitely detailed 3D landscape map. Accurate down to a few centimeters, it maps ground layout, individual tree branches and plant cover. In this environment, where trees are barely hanging on, the tiniest bits of variation in topography or temperature might make a life-or-death difference for a seedling; a bed of deep moss may swaddle it in warmth; a subtle swale, projecting boulder or another tree might protect it from raking winds.

But most far northern soils are permanently frozen just below the surface, and warming climate is not altering the fearfully small amount of light reaching plants much of the year. A neighboring tree might also cast just enough shade so that a seedling cannot get enough light and warmth, and a too-dense stand of trees might reduce the overall soil temperature they themselves need for rooting and uptake of nutrients. The surveys, repeated every few days by automated cameras, are designed to show how the landscape changes over time.

Shrubby deciduous dwarf willows and aspens grow here, but the only real trees this far north are the spruces. Once one takes root, it grows slowly—very slowly. One day University of Idaho remote-sensing specialist Lee Vierling and Lamont ecologist Natalie Boelman aged some smaller ones by counting whorls—the bit of stem that sprouts from the top each growing season. One Christmas-tree size spruce reaching just over their heads turned out to be 96 years old; it had apparently started growing in 1920. Vierling said:

Woodrow Wilson was president then. World War I was just over.” The tallest trees reach 20 to 30 feet, a height that spruces can reach in a decade or two further south; these have probably stood for 200 to 300 years. 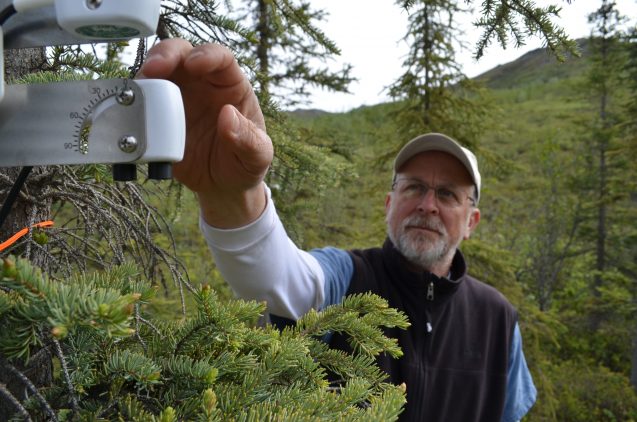 Warmer weather is almost certain to make these trees grow faster, and such weather is already here. With 24-hour daylight, the team worked up to 14 hours a day, much of the time sweating in intense sun. Around this time, the thermometer up at Deadhorse hit an all-time record of 85 degrees F—identical to New York’s Central Park that same day.

The team’s hostess in Wiseman, Heidi Schoppenhorst, has lived here her whole life. She said:

The trees are really booming here. The climate is warming, and there’s more rain in June, when it really matters.

There is already evidence from satellite imagery that the tundra beyond is becoming greener and shrubbier. Many scientists expect the tree line to advance eventually, and some studies purport to show that this is already happening. Some models predict that half the current tundra could be converted by 2100, though others say the process would be much slower. On the other hand, some studies assert the trees are actually retreating in areas, as heat dries forests, helping invasive insects and fires to destroy growing areas.

In Alaska, fires are predicted by one study to grow fourfold in coming decades, and it is already being ravaged; on the way up, the scientists passed through several big tracts reduced in the past few years to blackened sticks. This year a fire around Fort McMurray, in northern Alberta, drove out 80,000 residents and leveled part of the city. A few years ago, Boelman was part of a team that studied a 2007 lightning-sparked fire that burned 400 square miles of tundra on the North Slope — the biggest tundra fire ever recorded, in an area where thousands of years may go by without any fire at all. 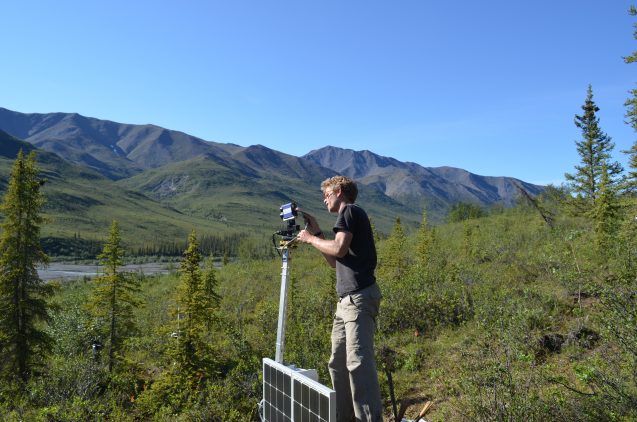 Team leader Jan Eitel of the University of Idaho sets up a solar-powered radar camera that will scan a study site continuously for years, to capture how trees respond to changing conditions. Image via Kevin Krajick.

Stroking the needles of a nearby spruce about up to her shoulder, but probably much older than she is, Boelman said:

The differences between tundra and trees are really interesting, especially since one is predicted to start encroaching on the other.

Boelman is part of a separate ABoVE project in which researchers are radiotagging northern animals including caribou, bears, moose, wolves and eagles, to see where they travel in relation to changing fire and weather conditions. Boelman has been working in northern Alberta tagging American robins, which are known to inhabit wide ranges and migrate vast distances. If anecdotal evidence means anything, the trend could be northward; in the last 20 years, some Inuit communities who had never seen robins before have had to invent a name for them: “Koyapigaktoruk.” 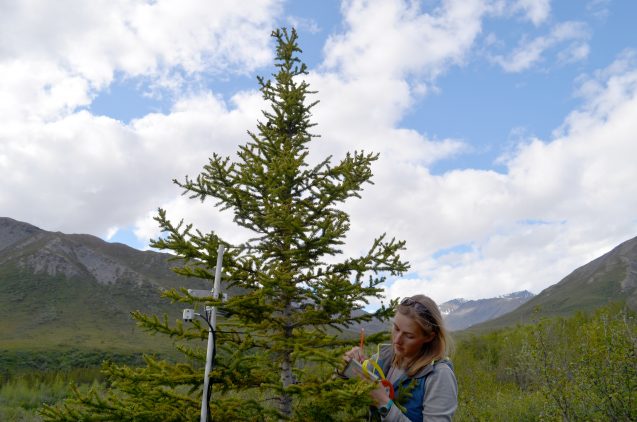 On her first trip to the north, Lamont-Doherty graduate student Johanna Jensen takes down data on a wired-up spruce. The study will provide not only long-term information on climate change, but opportunities for young scientists to work directly in the field. Image via

A few days after installing complex arrays of sensors, cameras and data loggers, along with solar panels and tangles of wires to connect them, the scientists discovered an unexpected wildlife phenomenon: Rabbits, rampant in the forest, loved chewing through the wires, and their equipment was blinking out. The team quickly made repairs and improvised defenses, burying the wires in spongy moss or surrounding them with palisades of sharp, dead sticks. Plans were laid for obtaining chicken wire for a more permanent solution.

Rabbits do not thrive like this in tundra, but if the trees and shrubs move northward, the rabbits will probably move with them. So will other creatures that favor such habitats, such as lynx, moose, black bears and white-crowned sparrows. Those who favor tundra would then have to adapt or get nudged out; these include musk oxen and open-area nesting birds such as Lapland longspurs and ptarmigans. Some animals, including barren-ground caribou and wolves, move seasonally between the two.

Boelman is neutral about the outcome.

People assume that when the ecosystem changes, it’s going to be all bad. But with climate change, there are almost always winners and losers. Some species will suffer, but others will benefit.

Along the Dalton Highway itself, change is happening fast. Near the study sites, workers were digging an endless ditch to lay a fiber-optic line to Deadhorse. Intrepid tourists, encouraged by the mild weather, passed by in heavily laden vehicles and waved. A man pushing a large stroller-type contraption southward was said to be on a mission to walk from Deadhorse to Austin, Texas. Giant trucks raced northward carrying cable, pipes, prefab buildings. Some were carrying gasoline, against the pipeline flow of oil going in the opposite direction. The fossil-fuel circle was being completed; refined energy was heading back to help keep up the production of raw energy.