For 20 years, researchers counting dead salmon tossed them on the side of a shallow creek. The result, it turns out, was healthier, faster-growing trees. You’ll enjoy this video.

In this video, University of Washington professor Tom Quinn tells the story of an unusual 20-year study. Dead salmon, counted for a different study, were tossed to the side of a shallow creek in Alaska, but only to one side of the creek (to avoid counting them twice). Salmon die naturally after spawning.

After 20 years, Quinn decided to end the study and measure trees to see if they grew differently during this time. It turns out that two decades of carcasses — nearly 600,000 pounds of fish — tossed to the left side of Hansen Creek did have a noticeable effect: White spruce trees on that side of the stream grew faster than their counterparts on the other side that received no salmon.

What’s more, nitrogen derived from salmon was found in high concentration in the needles of the spruce trees on the side of the tossed carcasses.

Essentially, said Quinn, the sockeye carcasses were fertilizing the trees. Quinn, a professor in University of Washington’s School of Aquatic and Fishery Sciences, is lead author of the study, published October 23, 2018, in the peer-reviewed journal Ecology. Quinn said in a statement:

Tossing the carcasses to the left side started out just as a convenience to keep from counting the same fish twice. I thought at some point in the future, it would be kind of cool to see it if had an effect. 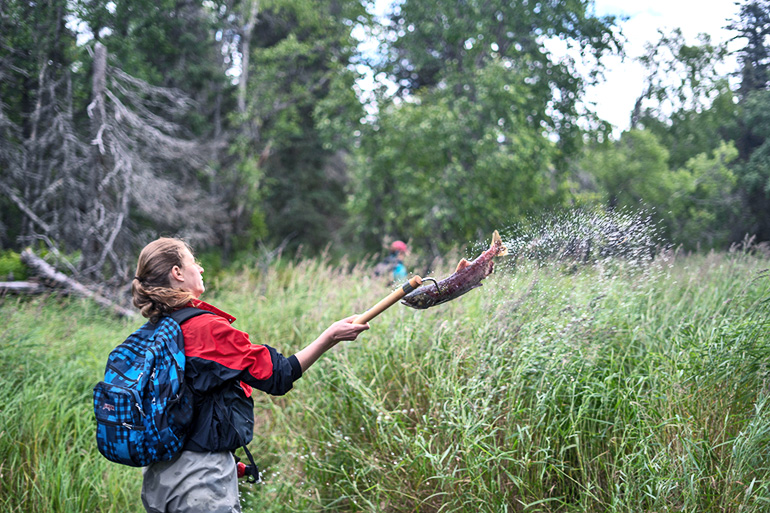 An undergraduate student uses a hooked pole to throw a dead sockeye salmon onto the bank of Hansen Creek. Image via Dan DiNicola/U. Washington.

Bottom line: Video tells the story of how dead salmon thrown on one side of a shallow creek by researchers over 20 years had an unexpected benefit: healthier, faster-growing trees.