Should scientists try to modify climate deliberately, in an attempt to cool the planet?

With climate scientists almost unanimously in agreement on human-caused global warming, some scientists, engineers, and policy-makers have already been talking about ideas to alter the world’s climate deliberately. This is called “geoengineering.”

“Geoengineering schemes are being proposed with the best of intentions. They’re trying to avoid a climate crisis that many people think will arise if we don’t do something about it.”
– Claire Parkinson, Goddard Space Flight Center, Greenbelt, MD

There are potentially many ways to alter Earth’s climate. With the current aim being to lessen the amount of global warming, one set of proposed actions would be to reduce the amount of sunlight striking the Earth, for example by using satellite technology to create a “space sunshade” or by otherwise reflecting sunlight away.

Reflecting sunlight away can be done at many levels, from the outer atmosphere down to the surface. The geoengineering technique most often depicted in popular articles involves pumping aerosols – or small particulate matter – into Earth’s upper atmosphere to increase reflection of sunlight.

Pinatubo volcano in 1991 produced the second-largest volcanic eruption of the 20th century, and it did cause cooling. Parkinson said, “Artifically injecting aerosols might also cause cooling, but they might bring on new problems, including damage to the ozone layer, increased pollution down at ground level, and changes to Earth’s weather and climate systems that we don’t know yet how to anticipate.” Image via Wikimedia Commons

Volcanoes do this naturally, as illustrated by what happened after the 1991 eruption of Mount Pinatubo, shown below. This huge volcanic eruption injected large quantities of aerosols into Earth’s stratosphere. It reduced the normal amount of sunlight reaching Earth’s surface. As a result, scientists observed a decrease in northern hemisphere average temperatures by about 1 °F following the eruption. The stratospheric cloud from the eruption persisted in the atmosphere for three years.

The eruption of Mount Pinatubo was a natural event, and it did cause cooling. Artifically injecting aerosols might also cause cooling, but they might bring on new problems, including damage to the ozone layer, increased pollution down at ground level, and changes to Earth’s weather and climate systems that we don’t know yet how to anticipate.

There are other ideas to cool Earth deliberately by increasing reflection – for example, using fine sea water spray to brighten clouds and make them more reflective. A safer bet might be to paint the rooftops of the world’s buildings white. A study has found that white roofs could offset the carbon emissions of all 600 million of the world’s cars for 18 to 20 years.

The ultimate consequences of all these attempts to cool the planet are unknown.

Discussions are also underway regarding ways to decrease carbon dioxide, or CO2, in Earth’s atmosphere, thereby causing cooling or at least not increasing warming.

One way to do this would be to capture the carbon dioxide at the emission source instead of letting it go into the atmosphere. Scientists and engineers – and even some energy companies – are already engaged in how to accomplish this feat, which is called “carbon capture.” The concern here is what to do with the carbon dioxide after it is captured. Some suggest putting it underground or underneath the ocean, at which point “carbon capture” becomes “carbon capture and storage.” 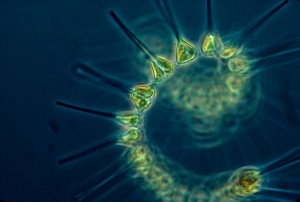 Phytoplankton – the base of the ocean food chain – suck up carbon dioxide for photosynthesis. Parkinson said, “It might be possible to increase phytoplankton growth in the ocean by fertilizing ocean waters that seem limited in iron. No one knows the full extent to which this action would affect ocean ecosystems.” Image via NOAA

Experts disagree about whether the benefits of geoengineering are worth the risks. Some scientists say we might need to try to cool Earth at some point, if it warms too rapidly. Other scientists warn against it, saying there are bound to be consequences of geoengineering that we haven’t anticipated. They say that Earth’s system is so complicated that – despite modern tools like satellite technology – we are a long way from fully understanding the climate system and what the repercussions of geoengineering might be. No large-scale geoengineering projects have been undertaken yet.

Will the nations of the world someday join together to carry out geoengineering ideas? Or might one nation, or a few nations – especially those undergoing the greatest effects of climate change – be tempted to try to change Earth’s climate on their own?

Read more: The Promises and Perils of Geoengineering