Space researchers and amateur photographers in Finland have categorized a new type of aurora, or northern lights. They call them “dunes.” Read more and see a video.

Something new under the sun! Or new to science, at least. Working together with space researchers, Finnish amateur photographers have announced a form of aurora, or northern lights. The form existed in the past, of course, but was never before described by science. They call the green-tinged aurora dunes, because, they said, it appears as an evenly spaced pattern of waves, resembling:

… a striped veil of clouds or dunes on a sandy beach.

The scientific community has acknowledged the newly categorized northern lights via the publication on January 28, 2020, of a study in a peer-reviewed journal, AGU Advances. The study tracked the origin of the dunes to the mesosphere and its boundary, the mesopause.

A statement from University of Helsinki explained how aurorae are made:

The sun releases a steady flow of charged particles, known as the solar wind. Reaching the Earth’s ionized upper atmosphere, the ionosphere, they create auroral emissions by exciting atmospheric oxygen and nitrogen atoms. The excitation state is released as auroral light. 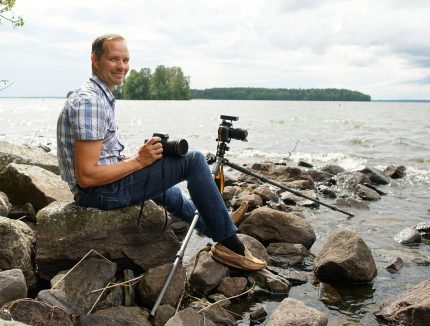 Finnish nature photographer Matti Helin took some of the photos that led to the new categorization and understanding of the dune-like northern lights. Image via Matti Helin.

Like most scientific discoveries, the new form of northern lights came to be identified both serendipitously and also with some serious effort. Matti Helin, a northern lights and astronomy hobbyist who took part in the study, told EarthSky:

On October 7, 2015, there was a magnificent storm of auroras. One observer, Mikko Peussa, uploaded his photos and wondered what were these strange stripes in the picture. The same phenomenon was photographed by several people that night, including me.

He said the photos were posted at the website Taivaanvahti, which is an observation system maintained by Astronomical Association Ursa of Finland. A discussion began about the unusual lights. Helin said:

Taivaanvahti was the initial place where the seeds for this project were planted. 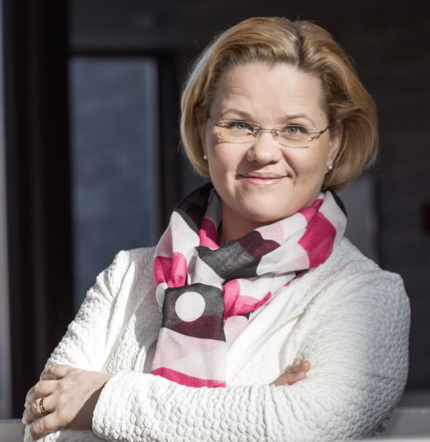 Aurora expert Minna Palmroth was writing a book – with the help of aurora photographers – when the hobbyists pointed out to her the new form of northern lights not previously categorized. Image via University of Helsinki.

Then, in late 2018, Minna Palmroth, an aurora expert at the University of Helsinki, published a book titled Revontulibongarin opas (A guide for aurora borealis watchers):

The book was born out of Palmroth’s cooperation with northern lights enthusiasts and the answers she provided to questions about the physics of the phenomenon in the hobbyists’ Facebook group [the group is called Revontulikyttääjät or Aurora Stalkers). Thousands of magnificent photographs of the northern lights taken by hobbyists were surveyed and categorized for the book. Each auroral form is like a fingerprint, typical only of a certain phenomenon in the auroral zone.

During the classification, hobbyists pointed out that a certain auroral form did not fit into any of the pre-existing categories. Palmroth set aside these unusual forms for later consideration.

By an almost unbelievable coincidence, just days after the book was published, the hobbyists saw this unusual form again and immediately informed Palmroth.

One of the most memorable moments of our research collaboration was when the phenomenon appeared at that specific time and we were able to examine it in real time.

The new observations helped them all identify and categorize the new form. Helin said:

It was like piecing together a puzzle or conducting detective work. Every day we found new images and came up with new ideas. Eventually, we got to the bottom of it…

Palmroth and the citizen scientists believe that the dune-shaped auroral emissions are created when solar wind charges the oxygen atoms in a particular way. It happens when a rare gravity wave rising up in the atmosphere is filtered and bent to travel between the mesopause and an inversion layer intermittently formed below the mesopause. The mesopause and the inversion layer are colder than the other layers of the atmosphere. A wave channel is established between the two layers. In that channel, gravity waves coming from below can travel long distances without subsiding.

It’s gravity waves surging through the channel that create the dune-shaped northern lights.

Palmroth and the citizen scientists said this new auroral form provides researchers with a novel way to investigate conditions in the upper atmosphere.

Read more about this discovery via the University of Helsinki. 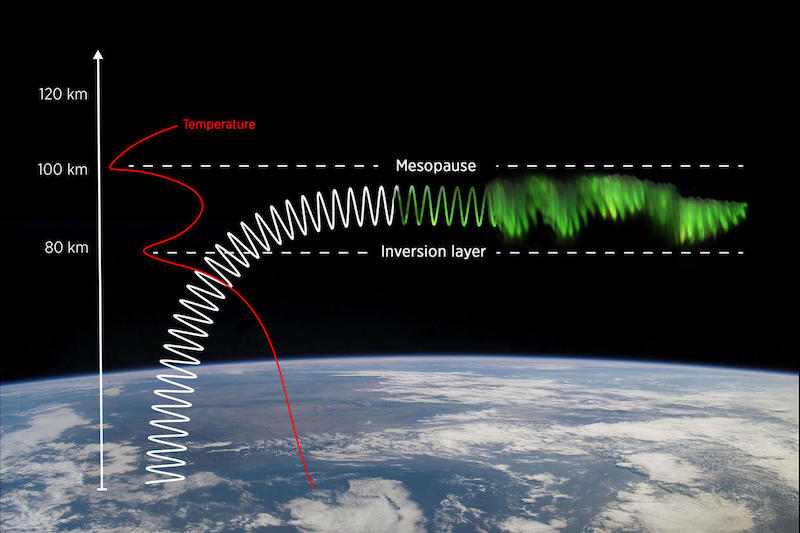 How the new form of dune-like northern lights are created. A gravity wave rises up in the atmosphere and begins to travel between the mesopause and an inversion layer intermittently formed below the mesopause. A wave channel is established between the 2 layers. It’s gravity waves surging through the channel that create the dune-shaped northern lights. Graphic via Jani Närhi/ University of Helsinki.

The new auroral form – called “dunes” – appears as a green-tinged and evenly spaced pattern of waves resembling “a striped veil of clouds or dunes on a sandy beach.” Image via Kari Saari/ University of Helsinki.

By the way, auroras on Earth are seen at high latitudes throughout each year, but – because they stem from activity on the sun – they are most intense and frequent when the sun is in an active part of its 11-year cycle. We’ve been at the low point of a cycle – with few spots seen on the sun’s surface, for example – but the sun should begin rising in activity soon, if it hasn’t begun already. The new cycle will be Cycle 25. It’s expected to be average in intensity, similar to Cycle 24. In the meantime, here’s a beautiful photo from Matti Helin of northern lights seen from Finland, captured in September 2019. It’s not the new form! But we know you’ll enjoy it …

Bottom line: Finnish scientists and amateur photographers have identified a new type of aurora. They call it dunes, because, they said, it resembles wavy beach sand dunes.