Chameleon in amber is world’s oldest

About 100 million years ago, a baby chameleon crawled into some sticky resin. Over time, the resin fossilized into amber, leaving the lizard remarkably preserved. 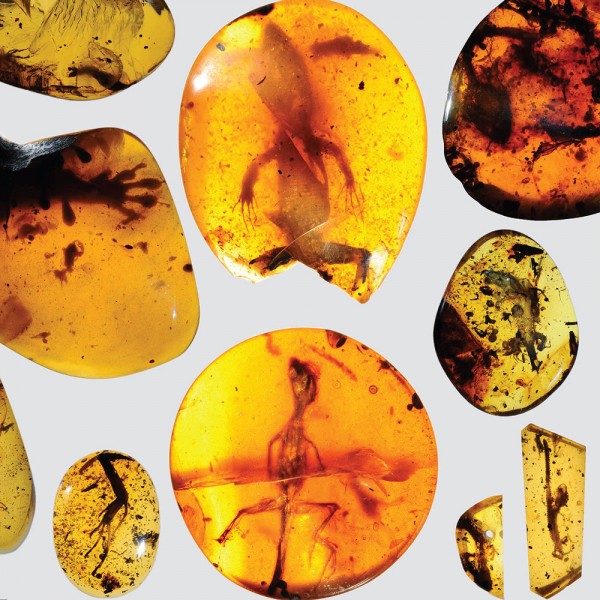 Ninety-nine million years ago, a baby chameleon was creeping through the ancient tropics of present-day Myanmar when it got trapped in the resin of a coniferous tree. Over time, the resin fossilized into amber, leaving the lizard remarkably preserved.

Seventy-eight million years older than the previous oldest specimen on record, the dime-size chameleon along with 11 more ancient fossil lizards encased in amber were pulled from a mine decades ago, but it wasn’t until recently that scientists had the opportunity to analyze them. Of the 12 lizard specimens, three — a gecko, an archaic lizard and the chameleon — were particularly well-preserved. A new study of the fossils was published March 4, 2016 online in the journal Science Advances.

Edward Stanley, a University of Florida postdoctoral student is co-author of the study. Stanley first encountered the amber fossils at the American Museum of Natural History after a private collector donated them. He knew the fossils were ancient, but it was a combination of luck and micro-CT technology that allowed him to identify the oldest chameleon. Stanley said:

It was mind-blowing to see the fossils for the first time. Usually we have a foot or other small part preserved in amber, but these are whole specimens—claws, toepads, teeth, even perfectly intact colored scales.

The fossils hold snapshots of “missing links” in the evolutionary history of lizards, Stanley said, that will allow scientists to gain a better understanding of where they fit on the tree of life. Stanley said:

The [lizard] fossil record is sparse because the delicate skin and fragile bones of small lizards do not usually preserve, especially in the tropics, which makes the new amber fossils an incredibly rare and unique window into a critical period of diversification.

A micro-CT scanner looked inside the amber without damaging the fossils, allowing study researchers to digitally piece together tiny bones and examine soft tissue. Scanned images of the detailed preservation provided insight into the anatomy and ecology of ancient lizards, Stanley said.

The amber gecko, for example, confirms the group already had highly advanced adhesive toe pads used for climbing, suggesting this adaptation originated earlier. As for the Southeast Asian chameleon, the find significantly pushes back the origins of the group and challenges long-held views that chameleons got their start in Africa.

Stanley said it also reveals the evolutionary order of chameleons’ strange and highly derived features. The amber-trapped lizard has the iconic projectile tongue of modern chameleons, but had not yet developed the unique body shape and fused toes specially adapted for gripping that we see today.

Read more from the University of Florida