It’s said that once you’ve seen a green flash, you’ll never go wrong in matters of the heart. Here’s all you need to know to be able to see one, plus great pics! 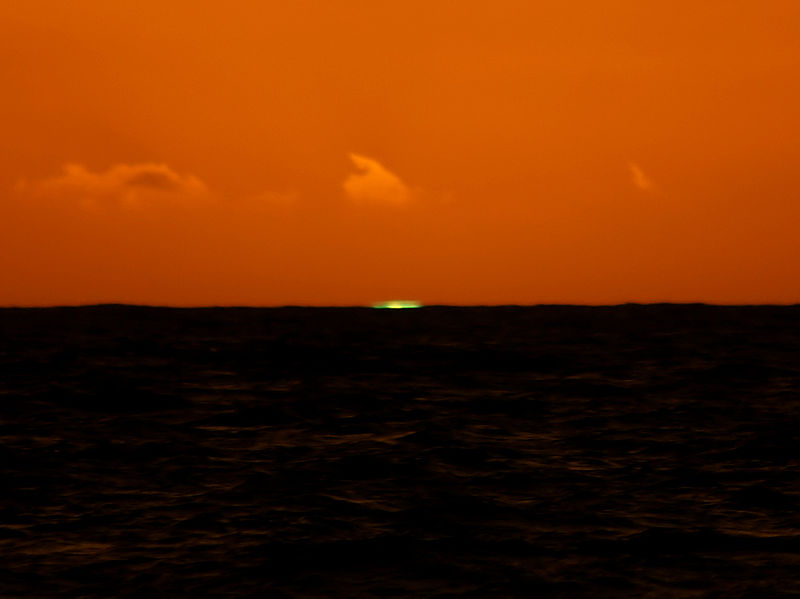 People tell me when I go to the beach to look at the sunset to try to see a green flash. What is a green flash?

The green flash is an optical phenomenon that you can see shortly after sunset or before sunrise. It happens when the sun is almost entirely below the horizon, with the barest edge of the sun – the upper edge – still visible. For a second or two, that upper rim of the sun will appear green in color. It’s a brief flash of the color green – the legendary green flash. It’s really quite exciting to see, especially if you’ve been looking for one.

It’s said that once you’ve seen a green flash, you’ll never again go wrong in matters of the heart. 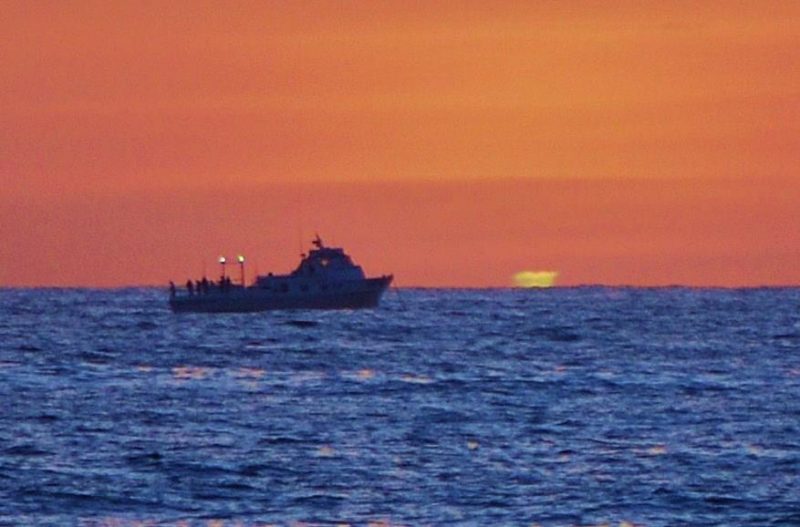 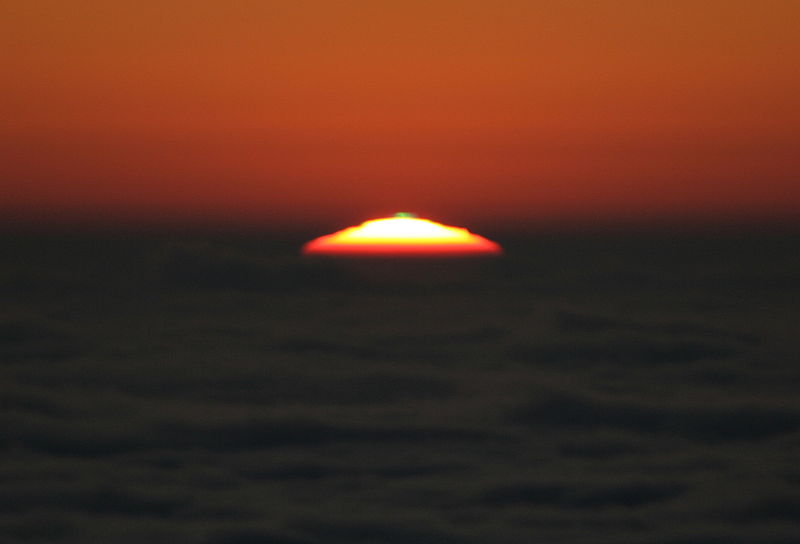 Green flash on setting sun observed from a mountain. Image via Amiteshomar/Wikimedia Commons. 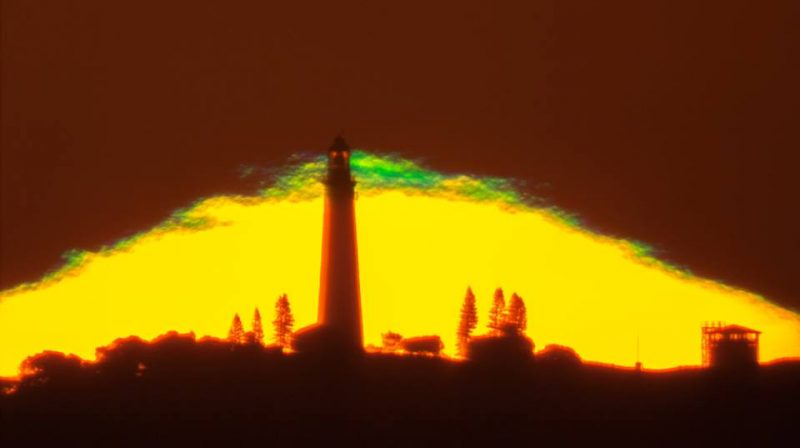 How can you see a green flash? You just need two things:

1. A clear day with no haze or cloud on the horizon.

2. A distant horizon – and a distinct edge to the horizon. You can see the green flash from a mountaintop or high building. But it’s most often seen over the ocean, by people on beaches or in boats.

Important tip: Don’t look at the sun until it is nearly entirely below the horizon. If you do, you will dazzle (or damage) your eyes and ruin your green flash chances for that day.

What is the green ray? The flash can be like a flame that shoots above the horizon. In that case, it’s called a green ray. I’ve seen lots of green flashes, but never a green ray, although I was once walking on a beach in Mexico and turned away just as my companion saw one. I did not find any photos of flamelike green rays (if you know of one, let me know), but the photo below suggests the beginnings of a ray. 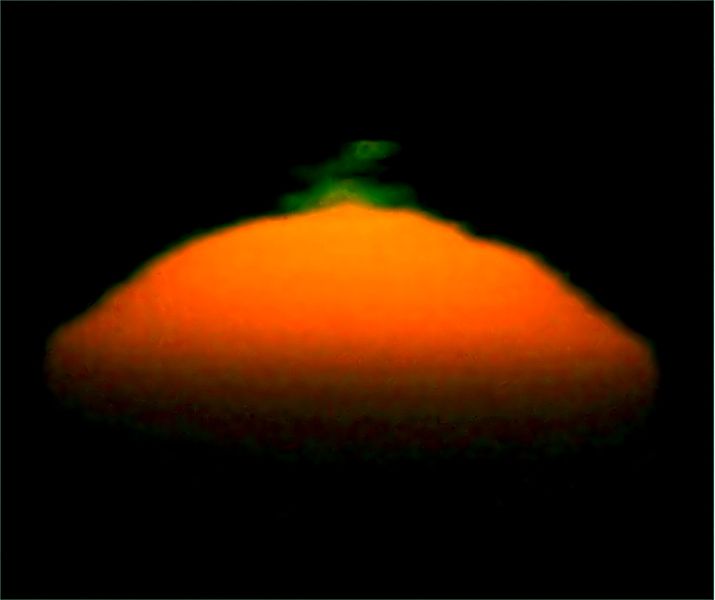 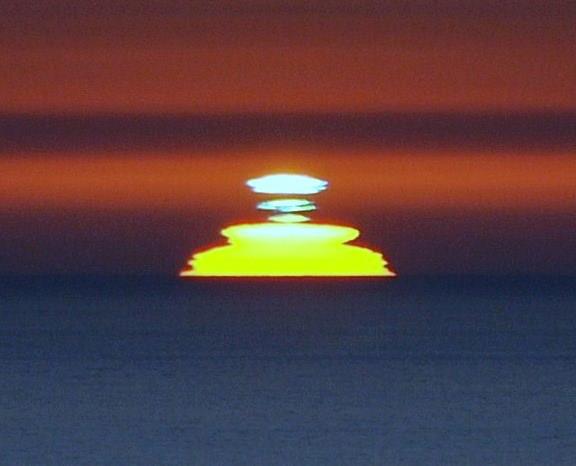 Mock mirage and green flash over the Pacific, seen by Jim Grant in San Diego.

What makes a green flash? The green flash is the result of looking at the sun through a greater and greater thickness of atmosphere as you look lower and lower in the sky. Water vapor in the atmosphere absorbs the yellow and orange colors in white sunlight, and air molecules scatter the violet light. That leaves the red and blue-green light to travel directly toward you. Near the horizon, the sun’s light is highly bent or refracted. It’s as though there are two suns – a red one and a blue-green one – partially covering each other. The red one is always closest to the horizon, so when it sets or before it rises, you see only the blue-green disk – the green flash. 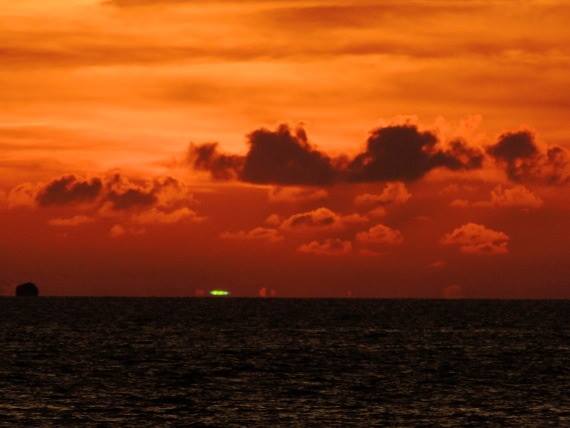 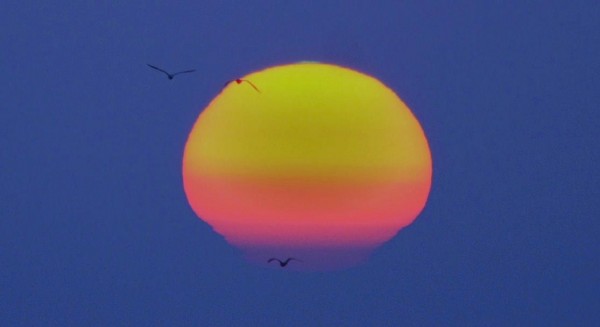 Little green flash on upper rim of the sun at sunset on November 4, 2012, captured by EarthSky Facebook friend Jim Grant in San Diego. 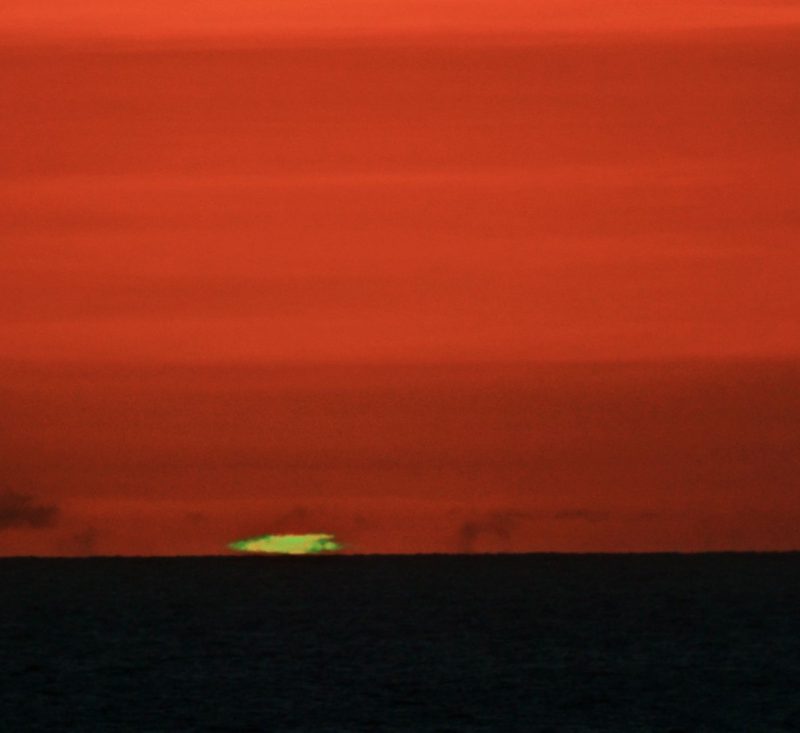 View larger at EarthSky Community Photos. | Bill Miller caught this green flash in Sint Maarten on April 27, 2020. He wrote: “We see green flashes frequently but it is always a challenge to get a good picture of one … timing is everything.” Thanks, Bill!

Bottom line: How to see the elusive green flash.