That drugs favored by humans can also affect other animals isn’t the newest of news. We’ve seen it before. Doped spiders spin wacky webs. Anxiety medication turns fish into reckless, binge-eating loners. And now scientists have found that caffeine, which so many of us rely on to wake up our weary brains, also impacts the brains of honeybees. Another bugs on drugs story to add to the annals. But what makes this case different is that, for once, we’re not the ones dosing the poor creatures. This time the drug pushers are plants. Yes, sneaky plants are mixing caffeine into the sugary nectar they offer to bees. And oddly this arrangement may benefit both plant and pollinator.

With the popularity of chemicals like caffeine, nicotine, and theobromine (which helps make chocolate irresistible to us, but also poisonous to our pets) it’s easy to forget that drugs of planty origin are not put there for our pleasure. They exist to protect plants from being eaten by hungry herbivores. They’re bitter and toxic and thus generally avoided by animals. In low enough doses, however, these same compounds are hours of pharmacological fun for our own species. Still, the perks of the caffeine buzz are more of a happy accident than an evolutionary adaptation, right? Perhaps not, according to the new study, published in last week in Science. 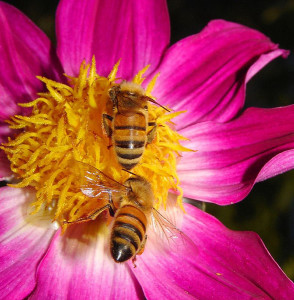 Hypothesizing that caffeine might actually help bees forage for food more efficiently, a group of British researchers tested how the chemical affects bees ability learn and recall that a floral scent will lead them to a sweet reward (much like they would in the wild to obtain plant nectar). While each laboratory “nectar” concoction offered the same amount of sugar, the caffeine content varied from zero to levels approximating those of instant coffee. Being hopped up on caffeine had only a small effect on the bees’ learning curve, but it was a huge boost to memory. After 24 hours time, bees were three times as likely to remember floral scents paired with sugar and caffeine than the decaf versions. Even after 72 hours, the trend persisted, with twice the bees recalling the buzz-inducing nectar compared to the sugar-only version. Recall that higher levels of caffeine did not lead to rewards with higher levels of sugar. In fact, simply raising sugar levels in the reward without adding caffeine did nothing to improve long-term memory. Sugar is what the bees are after, but they’re more likely to remember which flower provided the tasty treat when it’s served with a dash of caffeine.

All this is good for the bees, but even better for the plants, which must compete against other nectar providers for their share of the pollinator market. Two genera of caffeine-producing plants discussed in the study – Coffea and Citrus – use fragrant flowers to attract pollinators. Both benefit in increased fruit and seed production when pollinated by bees, so it’s really in their best interest to keep these costumers coming back. Making a quality product of sweet nectar is part of the marketing strategy, but if bees forget the floral source of their meal, plants are less likely to get repeat business. Adding a little caffeine, it seems, boosts the consumer’s brand recognition by improving their memory formation.

In addition to drugging bees, the researchers also measured caffeine levels in the nectar of the above-mentioned plants. While some species were more caffeinated than others, the median levels were right in the range of those found to improve memory in bees. 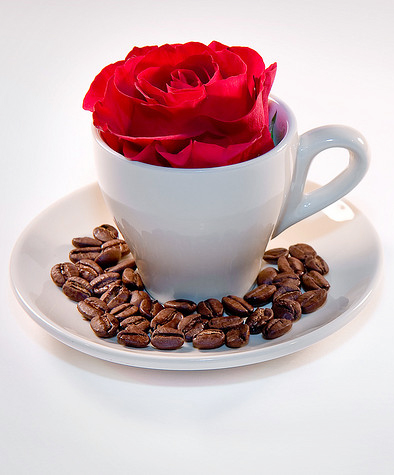 But caffeine is still a toxin, and thus there are limits to its utility as wilderness food additive. The study found that when concentrations of caffeine in the sugar solutions exceeded 1mM, bees lost their enthusiasm for the lab-made cocktail. Unless you’re a chemist, 1mM probably doesn’t mean much.* Let’s try to make that number a little less abstract by way of comparison. While scientists added as much as 100mM of caffeine to some batches of lab-nectar, the levels measured in the naturally occurring nectar of Coffea and Citrus never went above 0.3mM (or 0.058 mg/ml), still well below the point where bees start to get picky. Additionally, Coffea plants pack far more caffeine into other parts of their anatomy. Leaves and seeds have been found to have caffeine contents as high as 24 mg/ml. By my calculations, that’s over 400 times the amount of the buzziest of naturally occurring nectars.

The dramatic difference between caffeine levels in nectar and that in other parts of the plant suggests that plants may use the chemical for more than one purpose. At high doses it’s an excellent pest repellent for those regions in danger of being devoured. But in the smaller quantities distributed to nectar, its mind-altering properties encourage continuing patronage by more desirable animals, such as honeybees.

What the study did not address is whether caffeine might do more to bees’ brains than enhancing memory formation. Do the insects prefer flowers that provide them with not just food but also stimulants? Do decaffeinated nectars leave them feeling sluggish and irritable? Assessing the possibility of caffeine addiction in bees would require testing if they still gravitated to caffeinated plants even to their own detriment. Something like risking predation, or standing in line and shelling out 4 dollars for a venti caffeinated nectar.

* And if you’re just a lapsed chemist, here’s the breakdown: mM = millimolarity, the prefix milli (m) = 1/1000, molarity (M) = moles/liter. So basically, bees turned their noses up at sugar solutions containing more the 0.001 moles of caffeine per liter. Aren’t you glad you took the time to read this?