When pollen is scarce, bumblebees pierce the leaves of plants in order to force them to produce flowers more quickly, according to new research.

A new study has found that when pollen is in short supply, bumblebees damage plant leaves in a way that accelerates flower production.

Bumblebees need pollen from flowers to survive. But in our warming climate, bees are increasingly emerging from hibernation earlier in the year. What happens if they wake up before there are enough flowers in bloom?

Now, a team of Swiss researchers have discovered the bees have a way to order some fast food: They use their mouth parts to pinch into the leaves of plants that haven’t flowered yet, and that the resulting damage stimulates the production of new flowers that bloom weeks ahead of time. 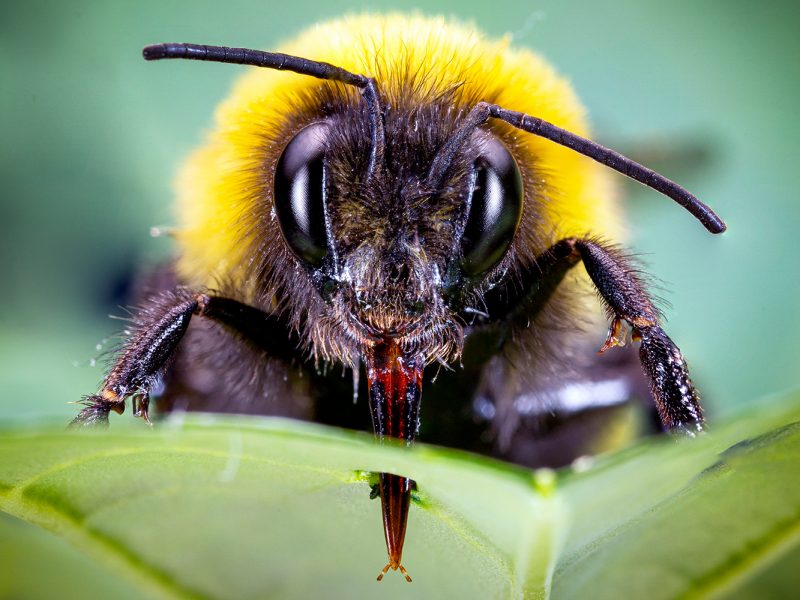 Biologist Mark Mescher of ETH Zürich is a co-author of the study published May 22, 2020, in the peer-reviewed journal Science. Mescher said in a statement:

Previous work has shown that various kinds of stress can induce plants to flower, but the role of bee-inflicted damage in accelerating flower production was unexpected.

According to a report in Science:

The researchers at ETH Zürich chanced upon the discovery when they noticed curious bite marks on leaves while studying how bees respond to plant odors. They had added bumble bees to a research greenhouse and observed them cutting holes in the shape of half-moons. What was going on? At first, the researchers thought the insects might be feeding on fluid from the leaves, but the bees didn’t stay long enough to get much. Nor did they appear to be taking any part of the leaves back to their colonies. 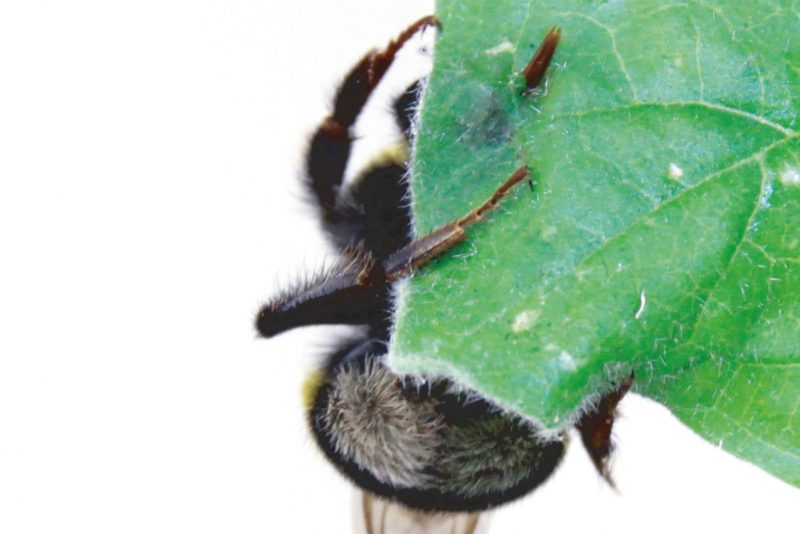 A bumblebee pierces a leaf with its tongue. Image via Hannier Pulido/ ETH Zürich.

Based on their studies, both in the field and in the lab, the researchers were able to show that the bumblebees’ propensity to damage leaves has a strong correlation with the amount of pollen they can obtain: That is, bees damage leaves much more frequently when there is little or no pollen available to them. They also found that damage inflicted on plant leaves had dramatic effects on flowering time in two different plant species. Tomato plants subjected to bumblebee biting flowered up to 30 days earlier than those that hadn’t been targeted, while mustard plants flowered about 14 days earlier when damaged by the bees.

The bee damage had a dramatic influence on the flowering of the plants – one that has never been described before … Bumblebees may have found an effective method of mitigating local shortages of pollen. Our open fields are abuzz with other pollinators, too, which may also benefit from the bumblebees’ efforts.

But, the researchers said, it remains to be seen whether this mechanism is sufficient to overcome the challenges of changing climate. Insects and flowering plants have evolved together, sharing a long history that strikes a delicate balance between efflorescence and pollinator development. However, global warming and other anthropogenic environmental changes have the potential to disrupt the timing of these and other ecologically important interactions among species. Such rapid environmental change could result in insects and plants becoming increasingly out of sync in their development, for example. Mescher said:

… And that’s something from which both sides stand to lose.

Bottom line: A new study reveals that when pollen is scarce, bumblebees pierce the leaves of plants in order to force them to produce flowers more quickly.