Buddhist statue has a mummy inside

The mummy inside this statue – which was found in China – appears to be a man 30 to 50 years old. He was apparently buried alive inside a chamber while meditating. 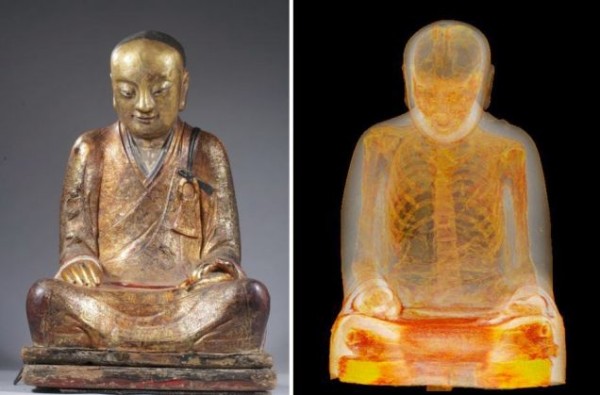 Buddhist statue with mummy inside.

Ye-ow! What a story. The image above is making the rounds on science websites this week (February 23, 2015). It shows a Buddhist statue with (surprise!) a mummified body inside. A CT scan, at right on the image above, shows the mummy. It’s a strange image, but the story around it is even stranger.

The statue is said to be the remains of a monk – a man, between 30 to 50 years old – who lived around the year 1100. Alan Boyle at NBCNews.com reported that:

The statue was subjected to CT scans in December at Meander Medical Center in Amsterdam. Researchers determined that the monk went through self-mummification, a process that involves being buried alive inside of a chamber while meditating.

The practice of self-mummification, which sounds so macabre to us moderns, did indeed take place in Asia between the 12th and early 20th centuries AD. According to Io9, the most famous self-mummies are the sokushinbutsu — the Buddhas in the flesh — whose bodies have been found in Japan, primarily in Yamagata Prefecture. Prior to the mummy found recently, some 24 individuals had been found successfully self-mummified. They were said to be mainly practitioners of Shingon Buddhism.

The most recent apparent example of self-mummification, though, wasn’t found in Japan. It was originally discovered in China. Wilfried Rosendahl, head of the German-Mummy-Project at the Reiss-Engelhorn-Museen in Mannheim, Germany, told NBCNews.com:

The object is a rarity.

He said nothing like it has been studied in Europe before. The mummified body was apparently kept in a monastery for a couple of centuries, before he was covered by paper and enamel to make a statue.

This fascinating artifact is currently on display as part of a mummy-themed exhibit at the Netherlands’ Drents Museum.

Just last night, I saw the movie Awake: the Life of Yogananda. It’s a documentary on the life of Paramahansa Yogananda, who introduced millions in the west to the practice of meditation. Maybe for that reason, to me, while the statue of the Buddha itself is beautiful, the CT scan of the meditating body inside is even more so. Do you agree? Tell us in the comments below.

Buddha statue is actually a 1000 year old mummy of a Buddhist master https://t.co/BaeQp7CxDo via @nl_times

Bottom line: Researchers in Europe have found a mummified body of a meditating man inside a Buddhist statue.