Seismic waves, the same type of waves used to study earthquakes, are also used to explore deep underground for reservoirs of oil and natural gas.

Seismic waves – the same tool used to study earthquakes – are frequently used to search for oil and natural gas deep below Earth’s surface. These waves of energy move through the Earth, just as sound waves move through the air. In oil and gas exploration, seismic waves are sent deep into the Earth and allowed to bounce back. Geophysicists record the waves to learn about oil and gas reservoirs located beneath Earth’s surface. Bob Hardage of the University of Texas Bureau of Economic Geology is an expert of the use of this technology for oil and gas exploration. He spoke to EarthSky’s Mike Brennan. 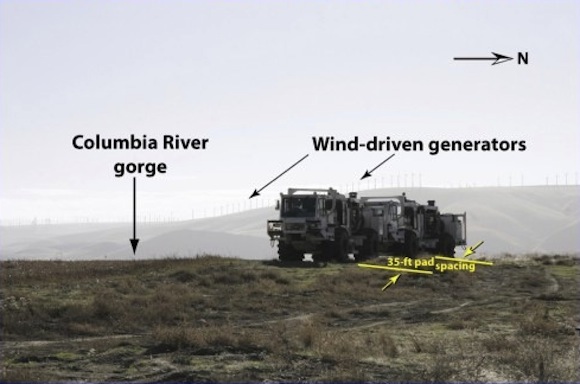 How are seismic technologies used in finding oil and gas today?

What we use in exploring for Earth’s energy resources is called reflection seismology. When you use seismic waves in the study of earthquakes, the earthquakes are the source of energy, that is, the source of the waves. But, in using reflection seismology for oil and gas exploration, we have to deploy some kind of an acceptable energy source on the surface of the Earth and then distribute an appropriate number of seismic sensors across the Earth’s surface that will record the waves that are reflected back.

So you’re sending seismic waves down into the Earth, they bounce back, and then you’ve got sensors across the surface of Earth that pick up those reflections?

Yes. That is exactly what is done. There are a variety of energy sources used. The most common one that’s used on shore is called vibroseis. They’re very large, heavy vehicles that weigh 60,000 to 70,000 pounds. They apply a base plate to the Earth, and they have a hydraulic system integrated into the vehicle that vibrates that base plate over a predetermined frequency range. So the vibroseis – which is what we would call the source station – becomes the energy source of the seismic waves.

The wave field generated at the source station radiates away from that point as a three-dimensional wave. It goes down and reflects back. The reflected wave field from each rock interface that is encountered in the propagation of this down-going wave field is then recorded at the Earth’s surface by sensors, which we call geophones. They’re distributed in specific geometries on the surface, above the area of interest. We use those sensor responses to image the interior of the Earth, in places where we’re interested in getting a very detailed understanding of the geology.

When a reflected wave field comes back to the Earth’s surface, where a geophone is located, the case of the geophone moves as the Earth moves. But inside that case is this suspended coil of copper wire. There’s a magnet attached to the case of the geophone, and when the Earth moves the case and its magnet attached to the case, that magnet moves across these copper wires and out goes a voltage.

It’s a very simple little device, but geophones have now gotten to be extremely sensitive. To give you an idea of the sensitivity, we have to stop seismic recording if winds get up to, say, 20 miles an hour or higher. The reason is the wind shakes the grass and affects the signal. It just builds up background noise in the geophones that is undesirable.

A small insect, even an ant, can crawl across the top of a geophone, and it’ll generate noise in that geophone. So they’re really extremely sensitive devices. 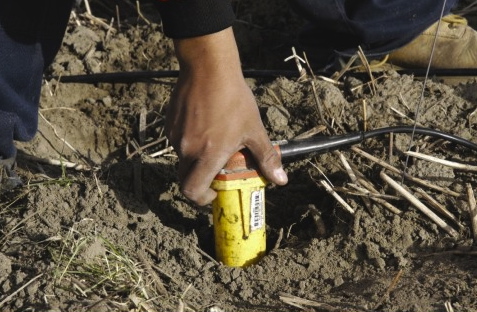 Are there other seismic technologies being deployed?

Yes. I haven’t talked yet about offshore seismic work, and there are really more seismic data acquired offshore than on shore. There’s a different kind of technology being used offshore. Because of very justifiable environmental concerns for marine animals – primarily whales, dolphins and such – air guns are the only seismic source used offshore.

These are devices that are towed behind ships. The air gun arrays, when they release compressed energy, generate a powerful pressure wave. The pressure wave travels through the water column, then enters the seafloor strata, propagates on downward to illuminate the geology. The reflected wave fields then come back up and travel through the water column to hydrophone cables that are towed by the same vessel, or by a separate companion vessel.

These towed hydrophone cables now are also getting to be extremely large. They may be as long as, say, even 15 kilometers (9 miles). And there could be, in some of the modern ships, perhaps 20 or so of those cables, side by side, spread out laterally over a distance of about one kilometer. So the array of sensors that are in the water is somewhat mind boggling.

Again, these hydrophones that record this reflected wave field digitize the upcoming seismic reflection events at very small time increments – one or two millisecond intervals – for long time periods of several seconds. So you get very deep data. It’s somewhat of a marvel of digital recording technology in terms of the mass of data that are handled. 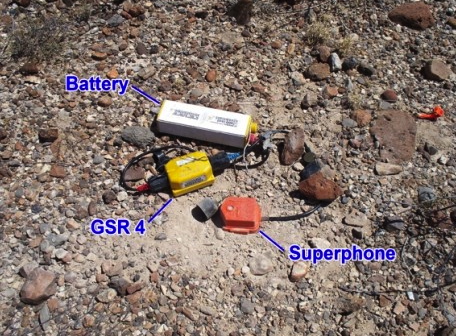 Complete seismic recording station deployed across a geothermal prospect. A single Superphone receives the reflection signal, which is digitized and saved by the module labeled GSR 4.

How has this technology changed?

Over time, it turns out, the oil and gas industry has been one of the largest drivers of developing digital recording technology.

When I started in the business, back in the late 1960’s, the oil and gas industry was transitioning from analog data recording to digital data recording. The first digital systems were very limited in data channel capacity. When I use the term data channels, I mean how many seismic sensors are being recorded. If you are recording, say, 50 data channels, you are getting responses from 50 geophones. In some of the early systems, we were just thrilled that we could record 48 data channels or 96 data channels.

The receiver antenna that we could create on Earth’s surface was quite limited in its size and how you could configure it. All the way through the 1970s, there was a drive to create better, bigger, faster data recording systems. That’s still happening today, by the way.

In the 1970s, also, there were several seismic contractors, but one company dominated the business. They were much like the Microsoft of their time in that profession. They were called GSI – Geophysical Services, Inc. – and they were one of the earliest developers of digital seismic recording technology. We are, again, at the timeframe when solid state electronics were coming on the scene. GSI decided that it needed to build or create its own internal company to build the solid state devices needed for seismic recorders. They created the new company and named it Texas Instruments. Now Texas Instruments, as you know, is big in the digital industry. It’s dominant. Meanwhile, GSI, the seismic contractor is gone from the scene, which no one ever thought would happen.

So I’m trying to paint a picture about the oil and gas industry. It’s been the driver for huge amounts of development in the digital industry that everyone lives with today – the cell phones everyone uses, and everything else. 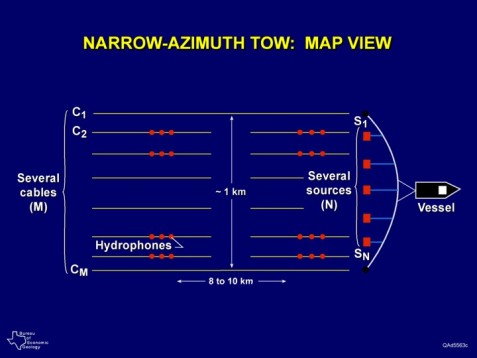 Drawing of a marine seismic operation. Each red square towed by the vessel is an array of air guns.

What’s the most important thing people need to know about seismic technologies used in oil and gas exploration?

Well, one key thing about seismic technology for oil and gas is that other industries stand to benefit equally from these advances in reflection seismology. One benefactor would be geothermal, which is a renewable type of energy that we’re all very interested in now.

Another strong and invaluable application of reflection seismology, which gets us into some environmental concerns, is this awareness that’s emerging around the globe about the seriousness of CO2 concentrations in the atmosphere. There’s a movement to capture manmade CO2, and sequester it where it will not pollute the environment. That sequestration of CO2 is highly dependent upon seismic reflection technology. The reason is this: the oil and gas industry wants seismic technology so they can understand geology and extract oil and gas. But those who want to sequester CO2 need exactly that same information. It doesn’t matter which way you’re moving the fluids, taking it out of the rock system or putting it into the rock system, you need the same technology to help you decide what you must do to be safe and efficient in managing the fluid movement. 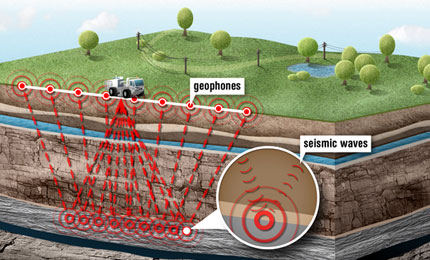 Check out this video on using seismic technology for oil and gas exploration.