In fact, the underwater volcano, called Tamu Massif, is among the largest in our solar system, say scientists.

Scientists say that Tamu Massif, an underwater volcano in the northwest Pacific Ocean is the largest single volcano yet documented on Earth and among the largest in our solar system.

Tamu Massif covers an area of about 120,000 square miles – that’s about the size of the British Isles or the state of New Mexico. By comparison, Hawaii’s Mauna Loa – the largest active volcano on Earth – is 2,000 square miles, or less than two percent the size of Tamu Massif. To find a worthy comparison, one must look to the planet Mars, home to Olympus Mons. That giant volcano, which is visible on a clear night with a good backyard telescope, is only about 25 percent larger by volume than Tamu Massif.

Scientists believe that the volcano is about 145 million years old and became inactive within a few million years after it was formed. 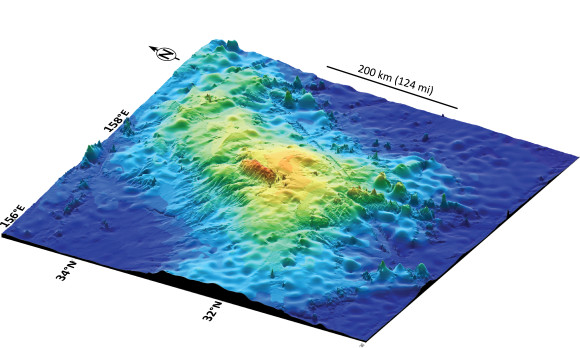 Located about 1,000 miles east of Japan, Tamu Massif is the largest feature of Shatsky Rise, an underwater mountain range formed 145-130 million years ago by the eruption of several underwater volcanoes.

Until now, it was unclear whether Tamu Massif was a single volcano, or a composite of many eruption points.

By integrating several sources of evidence, including core samples and data collected on board the JOIDES Resolution, scientists have confirmed that the mass of basalt that constitutes Tamu Massif did indeed erupt from a single source near the center.

The results appear in a paper in the September 6 issue of the journal Nature Geoscience. Will Sager of the University of Houston is the paper’s lead author. He said:

Tamu Massif is the biggest single shield volcano ever discovered on Earth.

There may be larger volcanoes, because there are bigger igneous features out there such as the Ontong Java Plateau. But we don’t know if these features are one volcano or complexes of volcanoes. 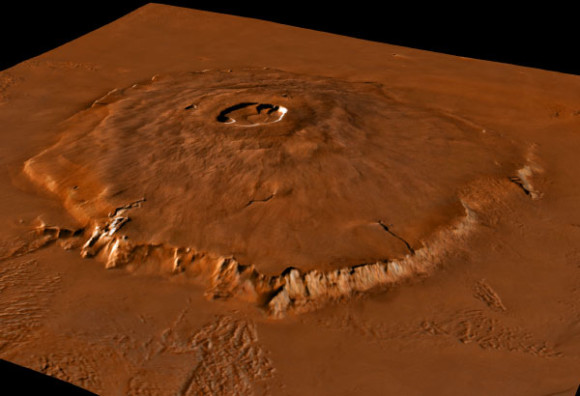 This is Olympus Mons (Latin for Mount Olympus) is a large shield volcano on the planet Mars. Image credit: NASA

Tamu Massif stands out among underwater volcanoes not just for its size, but also its shape.

It is low and broad, meaning that the erupted lava flows must have traveled long distances compared to most other volcanoes on Earth.

The seafloor is dotted with thousands of underwater volcanoes, or seamounts, most of which are small and steep compared to the low, broad expanse of Tamu Massif. Sagar said:

We know that it is a single immense volcano constructed from massive lava flows that emanated from the center of the volcano to form a broad, shield-like shape. Before now, we didn’t know this because oceanic plateaus are huge features hidden beneath the sea. They have found a good place to hide.

Bottom line: Tamu Massif, an underwater volcano in the northwest Pacific Ocean about 1,000 miles east of Japan,is the largest single volcano yet documented on Earth and among the largest in our solar system. That’s according to a paper published in the journal Nature Geoscience on September 6, 2013