“We found the world’s oldest asteroid strike in Western Australia. It might have triggered a global thaw.” 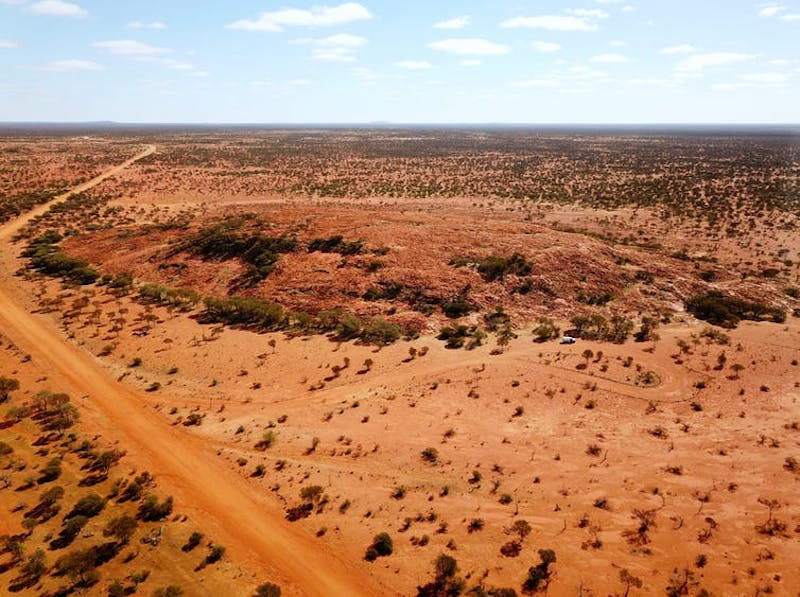 The ancient landscape at Yarrabubba preserves traces of the world’s oldest known asteroid impact. Image via Shutterstock/ The Conversation.

The world’s oldest remaining asteroid crater is at a place called Yarrabubba, southeast of the town of Meekatharra in Western Australia.

Our new study puts a precise age on the cataclysmic impact, showing Yarrabubba is the oldest known crater and dating it at the right time to trigger the end of an ancient glacial period and the warming of the entire planet.

What we found at Yarrabubba

Yarrrabubba holds the eroded remnants of a crater 40 miles (70 km) wide that was first described in 2003, based on minerals at the site that showed unique signs of impact. But its true age was not known. 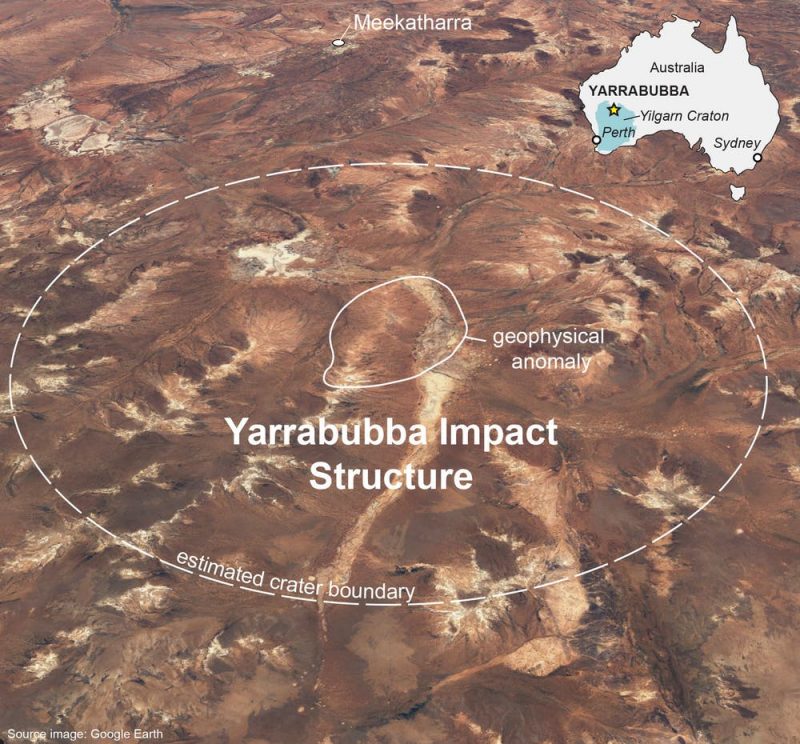 The Yarrabubba crater is about 40 miles (70 km) across. Image via The Conversation.

We studied tiny impact-shocked crystals found at the site, which show the crater formed 2.229 billion years ago (give or take 5 million years).

This new, precise date establishes Yarrabubba as the oldest recognized impact structure on Earth. It is some 200 million years older than the next oldest, the Vredefort impact in South Africa.

More intriguing, the geological record shows the Earth had glacial ice before the time of the impact, but afterwards, ice disappeared for hundreds of millions of years. Was the Yarrabubba impact a trigger for global climate change?

How to date an asteroid hit

An asteroid strike is one of the most violent geologic events. In an instant, Earth’s crust is squeezed to unimaginable pressures, before exploding and ejecting carnage across the landscape. Large impacts leave behind scars the size of a small city.

The basin formed by an impact will partly fill with molten and pulverized rock from the Earth and from the asteroid itself. The edge of the crater forms a ring of mountains; over time erosion gradually erases the story.

Today, Yarrabubba has been worn down into a minor feature on a barren landscape.

To place the Yarrabubba event in a geologic context, we had to find its age. To find the age, we had to look carefully at minerals in the rocks shocked by the impact.

Geologists date events using isotopic clocks in minerals like zircon and monazite. These minerals contain small amounts of uranium, which gradually decays into lead at a known rate. 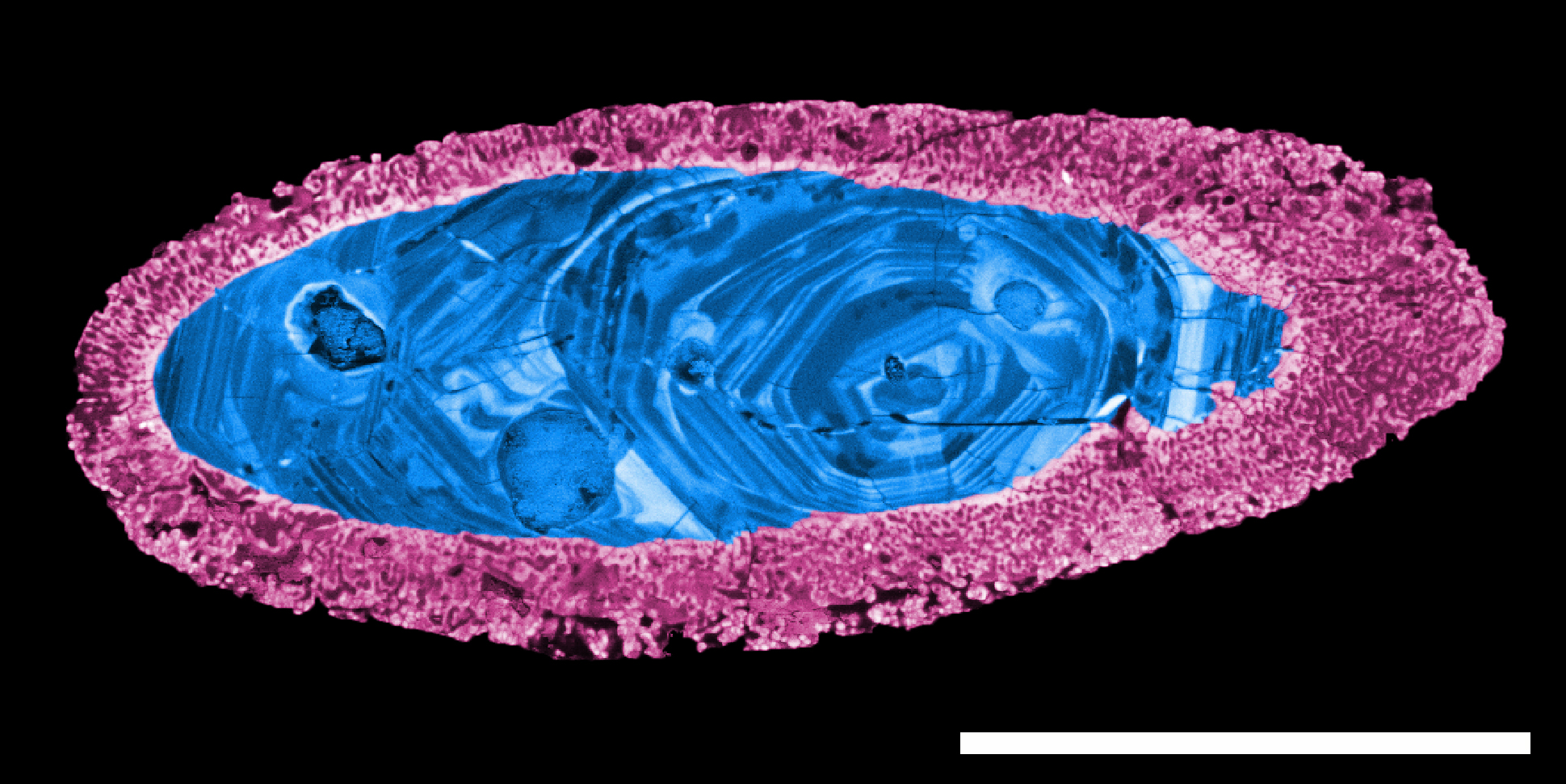 A shocked zircon crystal used to date the Yarrabubba impact. The margin (pink) recrystallized during impact, leaving the inner core (blue) intact. Scale bar is 80 micrometers, the width of a human hair. Image via The Conversation.

Asteroid strikes raise the temperature in rocks they hit, causing minerals to lose their accumulated lead, which resets the clock. After impact, the isotopic clocks start ticking again as new lead accumulates.

So by measuring the isotopes of uranium and lead in these minerals, we can calculate how much time has passed since the impact.

At Yarrabubba, we identified tiny crystals of zircon and monazite – each about the width of human hair – with textures that show they had been heated by a massive impact.

We analyzed the amounts of lead and uranium isotopes in these crystals using mass spectrometry, and found their clocks had been reset 2.229 billion years ago (give or take 5 million years). That’s when we realized Yarrabubba coincided with a major change in Earth’s climate.

The Yarrabubba impact occurred during a period in Earth’s history called the Proterozoic eon. Long before plants, fish, or dinosaurs, life at this time consisted of simple, multicellular organisms.

These simple bacteria had already begun changing the composition of air. Previously dominated by carbon dioxide and methane, Earth’s atmosphere gradually became oxygenated by life about 2.4 billion years ago.

As oxygen levels built up, rocks started weathering more, and the atmosphere cooled down. And then ice came, plunging Earth into globally frigid conditions.

Earth has repeatedly dipped into glacial conditions over the last 4.5 billion years. We know about these periods because of deposits of solidified rock and mud that were ground up by glaciers as they bulldozed across Earth’s surface.

Studies have found multiple periods in Earth’s history in which glacial deposits occur in rocks of the same age across many continents. These deposits may represent worldwide glacial conditions, often referred to as a Snowball Earth event.

In these periods, ice forms from the poles well into the tropics, covering nearly all of Earth.

There is geological evidence that Earth was in an icy phase during the Yarrabubba impact. Rocks in South Africa show that glaciers were present at this time. But it’s not clear if the amount of ice was similar to today, or if it covered the world.

So we found Earth’s oldest preserved impact crater, and worked out when the asteroid hit. We also know Earth had ice at the time, but not how much.

To understand the effect of the impact on an ice-covered world, we used computer models based on the physics of shockwaves to estimate how much ice would end up in the atmosphere as water vapor. As it turns out, it’s quite a lot.

Our models show that if the Yarrabubba asteroid hit an ice sheet 3 miles (5 km) thick (not an unreasonable estimate), more than 200 billion tons of water vapor would be ejected into the atmosphere. That’s about 2% of the total amount of water vapor in today’s atmosphere, but would have been a much bigger fraction back then.

Water vapor is a serious greenhouse gas. It’s responsible for about half of the heat absorption from solar radiation today.

Global climate models don’t yet exist for the Proterozoic Earth, so we don’t yet know for sure if the Yarrabubba impact pushed the planet past a tipping point that led to more warming and the end of a possible Snowball Earth.

Bottom line: A new study suggests that the Yarrabubba impact crater in Western Australia is Earth’s oldest known, and the asteroid impact coincided with a global thaw.