So far this year, the Arctic Ocean and neighboring seas have been slow to freeze, setting a record low for the floating cap of sea ice in November. 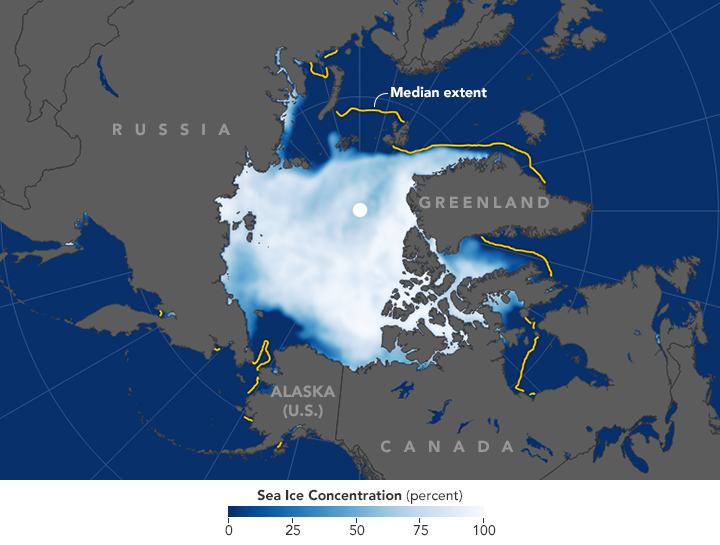 Average concentration of Arctic sea ice for November 2016. Opaque white areas indicate the greatest concentration, and dark blue areas are open water. The yellow line shows the median extent from 1981 to 2010, and gives an idea of how conditions this November strayed from the norm. Image via NASA

Due to unusually high air temperatures and a warm ocean, the November 2016 Arctic sea ice extent – the total area covered by floating sea ice – was the lowest November extent in the satellite record, according to scientists.

Every northern fall and winter, cooling ocean and air temperatures cause the floating cap of Arctic sea ice to grow from its annual minimum extent toward a maximum between February and April. So far in 2016, though, the Arctic Ocean and neighboring seas have been slow to freeze, setting both daily and monthly record lows.

The annual freeze-up is influenced by factors such as water temperature, air temperature, and wind patterns. All three factors played a role in the November 2016 record low, according to NASA scientists. Mark Serreze is director of the National Snow and Ice Data Center (NSIDC) at the University of Colorado Boulder. He said in a statement:

It looks like a triple whammy – a warm ocean, a warm atmosphere, and a wind pattern all working against the ice in the Arctic. 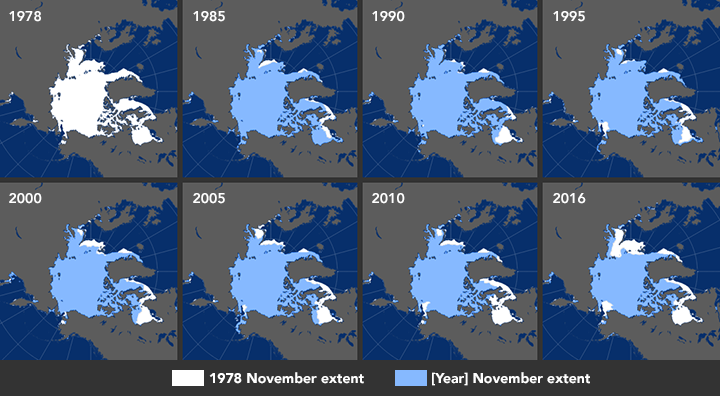 Years with sea ice above and below the median. The eight panels show the November extent roughly every five years since 1978, when satellites started monitoring sea ice. Image via NASA

After reaching this year’s annual minimum on September 10 (the second-lowest on record), sea ice started to quickly refreeze during the latter part of the month. But in October, ice growth slowed substantially and started setting record daily lows. Although freezing picked up again, the sea ice extent in October 2016 was the lowest of any October in the satellite record.

November was no better, setting record lows each day. Freezing that quickened near the start of the month was interrupted by a period of melting that lasted several days. Finally, ice resumed a faster growth rate during the last week of the month.

According to NASA scientists, a key reason for the record lows is a warm ocean.

During the summer, large expanses of dark, ice-free Arctic water were absorbing solar energy and warming. Until that heat escapes to the atmosphere, sea ice cannot form.

Air temperatures play a more nuanced role in sea ice growth and loss because they are largely affected by the what the sea ice and water are doing. (Air can be warmed by the water as it loses heat to the atmosphere.) But warm air also has been arriving on fairly persistent winds from lower latitudes.

Bottom line: So far this year, the Arctic Ocean and neighboring seas have been slow to freeze, setting record lows in November 2016 for the floating cap of sea ice.