Snap a pic, and the (free) Merlin Bird Photo ID app will identify the bird. Once downloaded, it can go anywhere bird-watchers go, even places without cell service or Wi-Fi.

What’s that bird? A new mobile app can help you identify it. The Merlin Bird Photo ID mobile app can recognize hundreds of North American species it “sees” in photos, then show you a list of birds that match your description and are expected in your area.

The app was developed by Caltech and Cornell Tech computer-vision researchers in partnership with the Cornell Lab of Ornithology and bird enthusiasts. Once it is downloaded on a mobile device, Merlin Bird Photo ID can go anywhere bird watchers go — even places without cell service or Wi-Fi.

Jessie Barry is the Merlin project leaded at the Cornell Lab. Barry said in a statement:

When you open the Merlin Bird Photo ID app, you’re asked if you want to take a picture with your smartphone or pull in an image from your digital camera.You zoom in on the bird, confirm the date and location, and Merlin will show you the top choices for a match from among the 650 North American species it knows.

How good is Merlin Bird Photo ID? Steve Branson is a senior postdoctoral scholar in electrical engineering at Caltech. He said:

Accuracy is around 90 percent if the user’s photo is of good quality. Submit a fuzzy image or one in which the bird is small or partially covered by leaves and the odds of getting an accurate match go down.

The computer scientists trained Merlin to recognize birds by showing it nearly 1 million photos, collected by birders and volunteers. The photos were annotated with the species of the bird as well as key identifying points such as wings, beaks, and claws. When a user of presents Merlin with a bird to identify, it selects species that closely match those characteristics. Like a good human birder, the Marlin considers species that would be found at that specific time of year and in that location using information from eBird, an online bird resource that collects and records an average of 7 million bird observation records each month from around the world.

Just around the corner, the developers say, is a Merlin Bird Photo ID release in Spanish for birds in Mexico. Down the road, the Merlin team plans to produce versions for South America, Europe, Asia, Africa, and Australia. 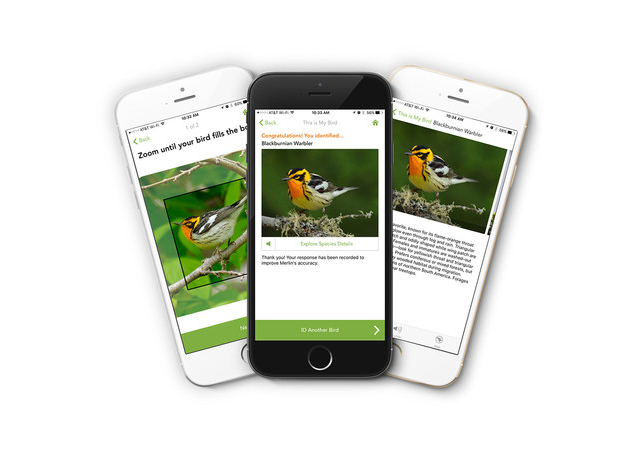