What are hole-punch clouds? Patricia Evans spotted this hole-punch cloud in November 2015 from a restaurant parking lot.

You’re probably familiar with contrails, the wispy strands of clouds made by jet exhaust high in the sky. But if you’ve ever seen a hole-punch cloud, sometimes called a fallstreak hole, you’ll be surprised by their strange appearance. They look like strange clearings in an altocumulus cloud layer, often circular patches of clear sky, surrounded by clouds. Sometimes people report them as UFOs. Airplanes create hole-punch clouds – but just how do they do it?

According to weather.com, an altocumulus cloud layer is:

… composed of small water droplets that are below freezing called ‘supercooled water droplets.’ If ice crystals can form in the layer of supercooled droplets, they will grow rapidly and shrink or possibly evaporate the droplets completely.

Studies, including this one by Andrew Heymsfield and collaborators, have shown that aircraft passing through these cloud layers can trigger the formation of the heavier ice crystals, which fall to Earth and then leave the circular void in the blanket of clouds.

They concluded that aircraft propellers and wings cause the formation of those initial ice crystals. There are zones of locally low pressure along the wing and propeller tips which allow the air to expand and cool well below the original temperature of the cloud layer, forming ice crystals. Andrew Heymsfield of the National Center for Atmospheric Research spoke with EarthSky some years ago, when his study first appeared. He told us:

This whole idea of jet aircraft making these features has to do with cooling of air over the wings that generates ice.

His team found that – at lower altitudes – jets can punch holes in clouds and make small amounts of rain and snow. As a plane flies through mid-level clouds, it forces air to expand rapidly and cool. Water droplets in the cloud freeze to ice and then turn to snow as they fall. The gap expands to create spectacular holes in the clouds. He said:

We found an exemplary case of hole-punch clouds over Texas. From satellite imagery you could see holes just pocketing the sky, holes and long channels where aircraft had been flying at that level of the cloud for a while. 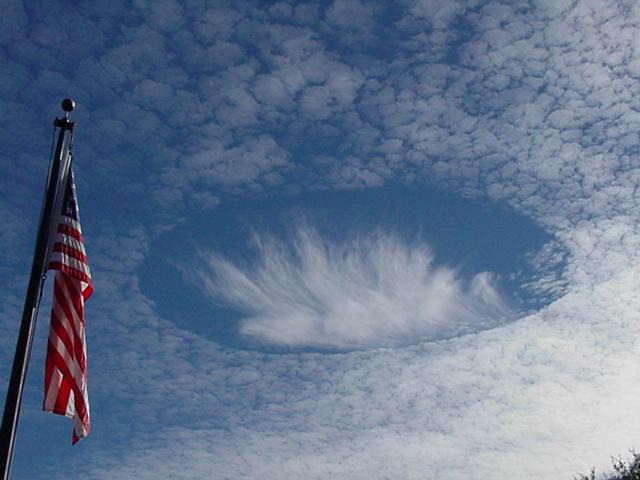 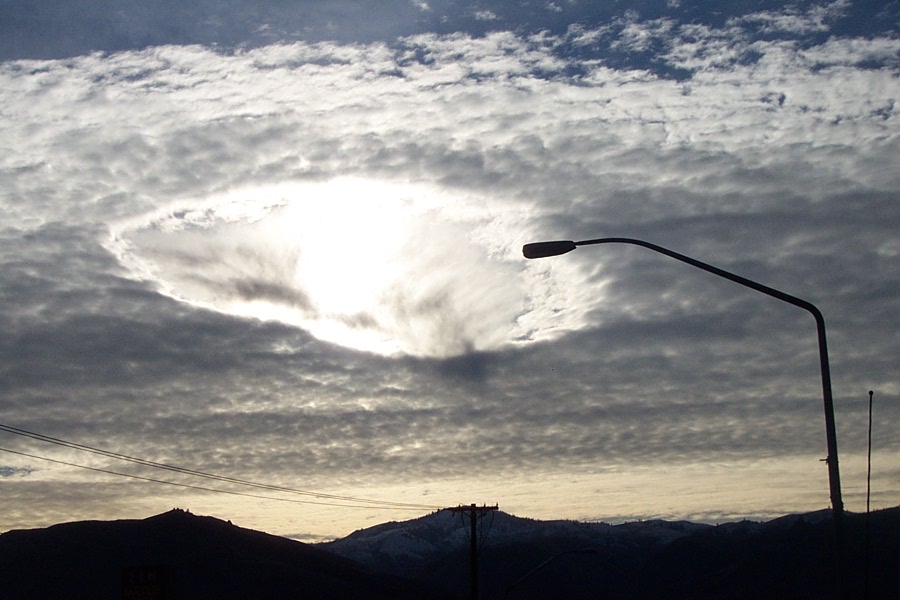 Another hole-punch cloud via NOAA.

Hole-punch cloud via Editor B.

Heymsfield used a weather forecast model developed at NCAR – and radar images of clouds from NASA’s CloudSat satellite – to explain the physics of how jet aircraft make hole-punch clouds.

Heymsfield’s team found that every measurable commercial jet aircraft, private jet aircraft and also military jets as well as turbo props were producing these holes. He said a hole-punch cloud expands for hours after being created. Major airports, where there’s a lot of aircraft traffic, would be a good place to study cloud holes. He said:

What we decided to do was look at major airports around the world, especially where there’s low cloud cover and cold clouds in the wintertime, and found that the frequency of occurrence suitable for this process to occur is actually reasonably high, on the order of three to five percent. In the winter months, it’s probably two to three times higher, 10 to 15 percent. He said people who look out their airplane window in flight can see for themselves how the wing changes a cloud.

It’s basically a super-cooled cloud. It’s just like a fog you see at the ground except that its temperature is zero degrees centigrade [32 degrees Fahrenheit]. So in that process of expanding, the air expands over the wing and cools. And that cooling can be as much as 20 degrees centigrade [68 F].

The cooling of air over the wings generates ice, said Heymsfield.

About the Texas incident where satellite imagery showed many hole-punch openings and channels, Heymsfield said:

What we found was that there were about a hundred of these little features. We decided to, first of all, identify their location and see if we could link them to particular aircraft. Then the second thing we did was say, okay, why do these long channels last for the period of time it would take for a satellite to take a snapshot of them? We got high-time-resolution satellite imagery and were able then to track these features, these holes, and watch them develop with time, watch how they developed. Bottom Line: Scientists have found that, at mid-altitudes, jet aircraft can punch holes in clouds and make small amounts of rain and snow. These are the strange hole-punch clouds that are sometimes reported as UFOs.