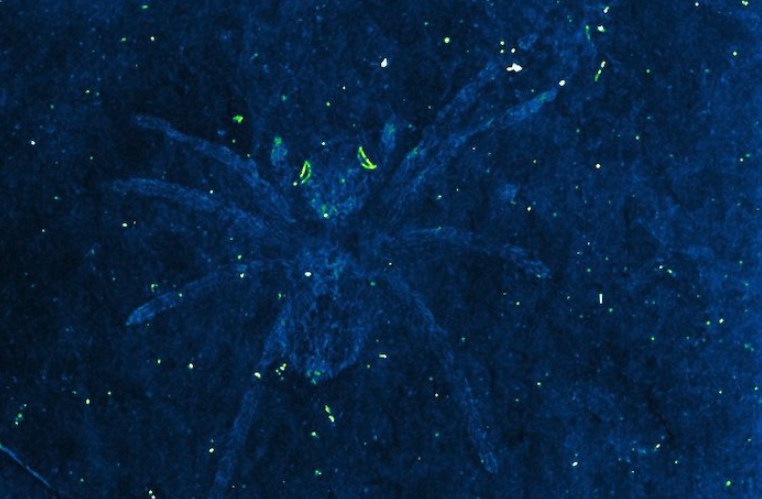 Two of the fossil specimens discovered in Korea had reflective eyes, a feature still apparent under light. Image via Paul Selden.

A new paper describes a remarkable set of fossil spiders found in South Korea. Two of the fossils – from an extinct spider family called Lagonomegopidae that lived between 110 and 113 million years ago – feature reflective eyes for nighttime hunting.

University of Kansas paleontologist Paul Selden is co-author of the paper, published in the Journal of Systematic Palaeontology on January 28, 2019. Seldon said in a statement:

Because these spiders were preserved in strange silvery flecks on dark rock, what was immediately obvious was their rather large eyes brightly marked with crescentic features. I realized this must have been the tapetum — that’s a reflective structure in an inverted eye where light comes in and is reverted back into retina cells. This is unlike a straightforward eye where light goes through and doesn’t have a reflective characteristic. 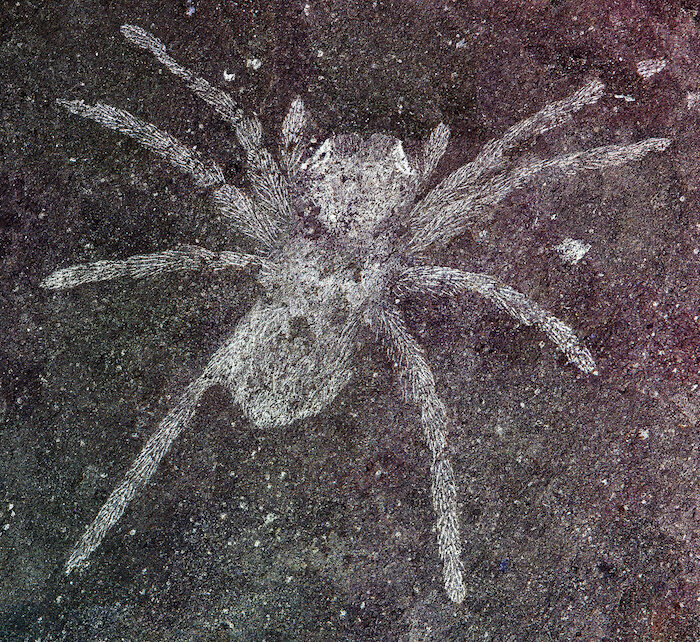 Selden said that some contemporary spiders feature eyes with a tapetum, but the new paper is the first to describe the anatomical feature in a fossilized spider. He said:

In spiders, the ones you see with really big eyes are jumping spiders, but their eyes are regular eyes – whereas wolf spiders at nighttime, you see their eyes reflected in light like cats. So, night-hunting predators tend to use this different kind of eye. This was the first time a tapetum had been in found in a fossil. This tapetum was canoe-shaped – it looks a bit like a Canadian canoe. That will help us place this group of spiders among other families.

Soft-bodied species like spiders aren’t usually fossilized in rock like animals with bones and teeth. More often, ancient spiders and insects are discovered preserved in amber. The researchers said these spiders, who lived between 110 and 113 million years ago, must somehow have been protected from deterioration to allow them to be so well-preserved in the shale formation. Seldon said:

This is so rare because they’re very soft – they don’t have hard shells so they very easily decay. It has to be a very special situation where they were washed into a body of water. Normally, they’d float. But here, they sank, and that kept them away from decaying bacteria – it may have been a low-oxygen condition.

These rocks also are covered in little crustaceans and fish, so there maybe was some catastrophic event like an algal bloom that trapped them in a mucus mat and sank them but that’s conjecture. We don’t really know what caused this, but something killed off a lot of animals around the lake at one time or on an annual basis.

The spider fossils were found in South Korea, in an area of shale called the Lower Cretaceous Jinju Formation, when the shale containing the fossils was exposed during a construction project.

According to Selden, the shale preserved the spider fossils in a manner that highlighted the reflectivity of the tapetum, a feature that may have been missed had the spiders been preserved in amber instead, as is more typical. He said:

Amber fossils are beautiful, they look wonderful, but they preserve things in a different way. Now, we want to go back and look at the amber fossils and see if we can find the tapetum, which stares out at you from rock fossils but isn’t so obvious in amber ones because the mode of preservation is so different.