Fossil remains of a 4-legged whale with hooves suggest that this whale could walk on land. With a robust tail and webbed fingers, it might have propelled itself through water like an otter.

Researchers have reported the discovery of fossil remains of a new species of ancient four-legged whale – named Peregocetus pacificus – found in 42.6-million-year-old marine sediments along the coast of Peru. The findings were published in the journal Current Biology on April 4, 2019.

The researchers say that the presence of small hooves at the tip of the whale’s fingers and toes, plus the structure of its hip and limbs,suggest that this whale could walk on land. On the other hand, they say, anatomical features of the tail and feet, including long, likely webbed appendages, similar to an otter, indicate that it was a good swimmer too. 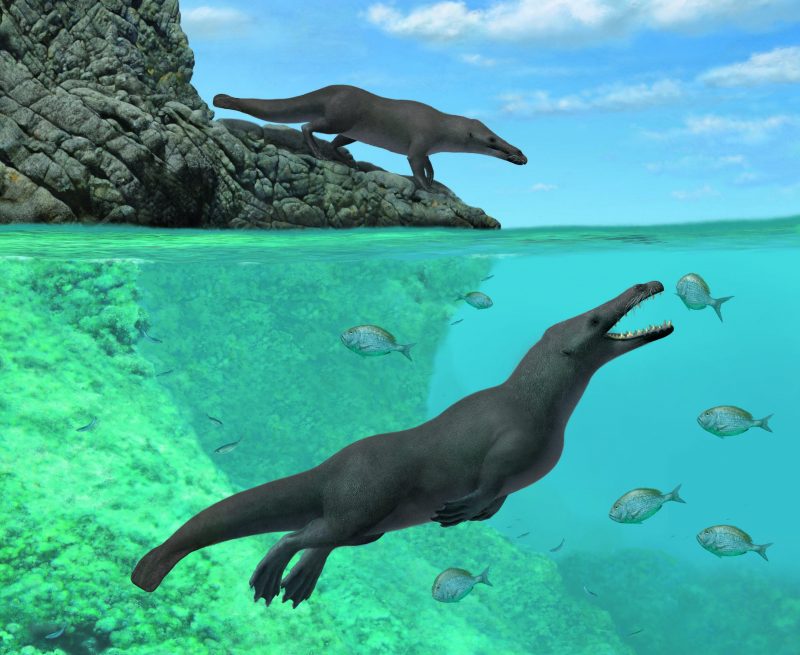 Artist’s concept of 2 individuals of Peregocetus, one standing along the rocky shore of present-day Peru and the other preying on fish. The presence of a tail fluke remains hypothetical. Image via A. Gennari/Cell Press.

Olivier Lambert of the Royal Belgian Institute of Natural Sciences is the study lead author. He said in a statement:

This is the first indisputable record of a quadrupedal whale skeleton for the whole Pacific Ocean, probably the oldest for the Americas, and the most complete outside India and Pakistan.

You might think of whales as the ultimate ocean-dweller, and although that might be true today, cetaceans (whales, dolphins, and porpoises) originated in south Asia more than 50 million years ago from a small, four-legged, hoofed ancestor that lived on land.

Read more about the whale’s evolution

The new fossil remains were unearthed in 2011 by an international team of scientists from Peru, France, Italy, the Netherlands and Belgium – in Playa Media Luna in in the coastal desert of southern Peru. They named the whale Peregocetus pacificus, which means “the traveling whale that reached the Pacific.” 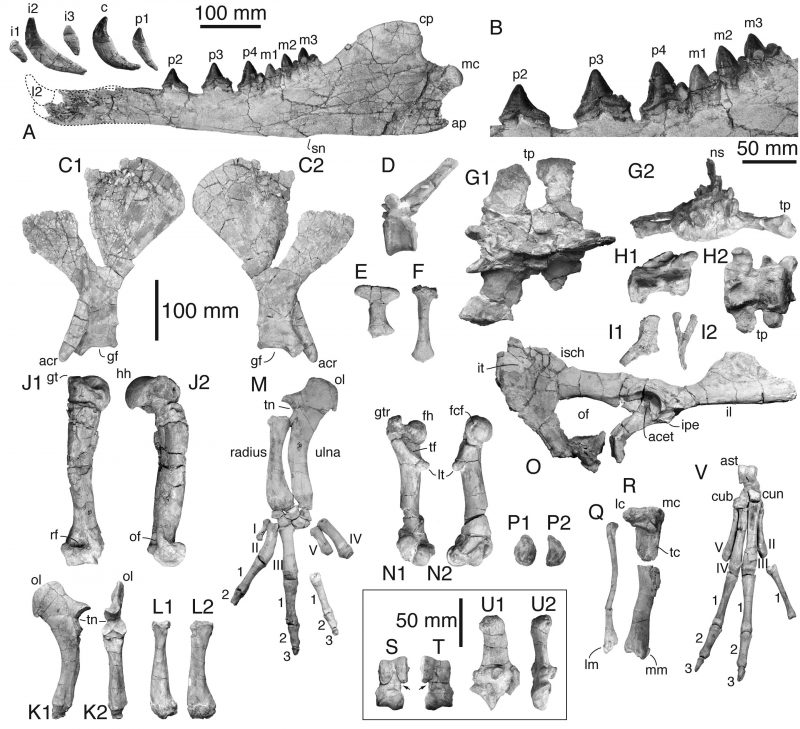 The bones of Peregocetus, including the mandible with teeth, scapula, vertebrae, sternum elements, pelvis, and fore- and hind limbs. Image via G. Bianucci.

According to a Cell Press report about the research:

With the help of microfossils, the sediment layers where the skeleton was positioned were precisely dated to the middle Eocene, 42.6 million years ago. Anatomical details of the skeleton allowed them to infer that the animal was capable of maneuvering its large body (up to 4 meters [13 feet] long, tail included), both on land and in the water. For instance, features of the caudal vertebrae (in the tail) are reminiscent of those of beavers and otters, suggesting a significant contribution of the tail during swimming.

The whales would have been assisted in their travel by westward surface currents and by the fact that, at the time, the distance between the two continents was half what it is today. The researchers suggest that, only after having reached South America, the amphibious whales migrated northward, finally reaching North America.

Bottom line: Fossil remains of a new species of 4-legged whale with hooves suggest that this whale could walk on land, and propelled itself like an otter.