Some of the African savannah’s most biologically diverse wildlife hotspots owe their vitality to heaps of manure deposited over thousands of years by livestock of wandering herders, says a new study. 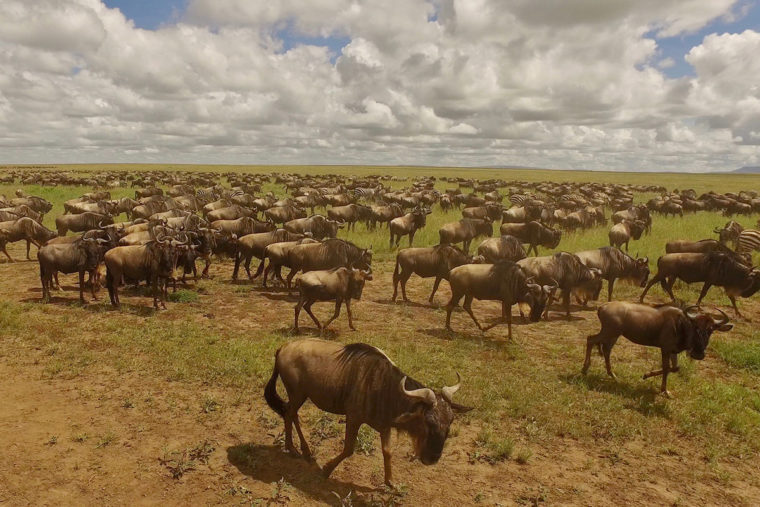 African wildlife, such as these wildebeest crossing the Serengeti, are drawn to the high-nutrient grass that springs up at the sites of ancient livestock corrals. Image via Washington University/Shutterstock.

New research suggests that some of the African savannah’s current wildlife hotspots, often viewed as wild, naturally pristine and endangered by human encroachment, owe their health to heaps of dung deposited there over thousands of years by the livestock of wandering herders.

Anthropologist Fiona Marshall of Washington University is a senior author of the study, published August 29, 2018, in the peer-reviewed journal Nature. Marshall said:

Many of the iconic wild African landscapes, like the Mara Serengeti, have been shaped by the activities of prehistoric herders over the last 3,000 years. Our research shows that the positive impacts of increased soil fertility in herder settlement corrals can last for thousands of years.

The longevity of these nutrient hotspots demonstrates the surprising long-term legacy of ancient herders whose cattle, goats and sheep helped enrich and diversify the vast savannah landscapes of Africa over three millennia. 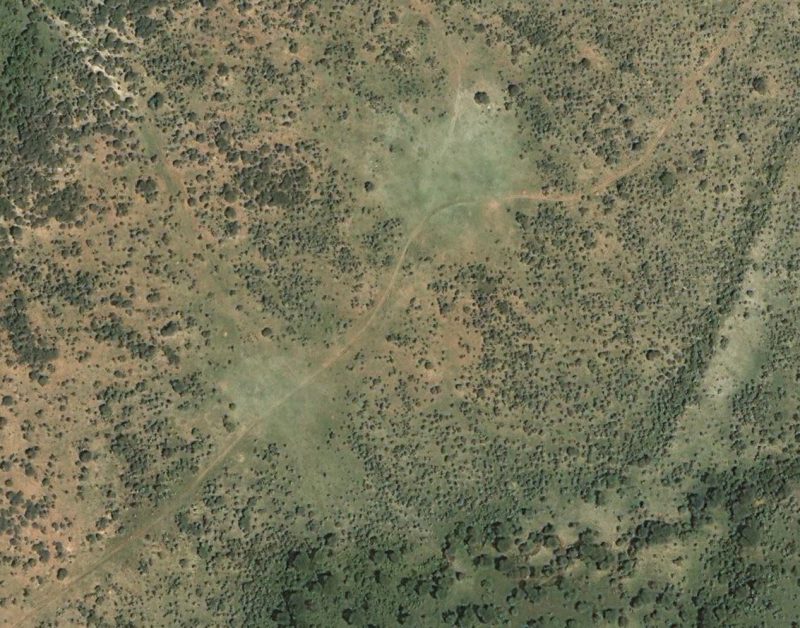 The study, which focused on wildlife hotspots in Kenya, documents how the cultural practices and movement patterns of ancient herders and their livestock continue to influence an array of seemingly wild and natural phenomena. Marshall said:

Ecologists have suggested that wildlife movements, including the Serengeti’s famous wildebeest migrations, may be influenced by the location of nutrient-rich soil patches that green rapidly during the rains. Our research suggests that some of these patches may be the result of prehistoric pastoral settlement in African savannahs.

Based on satellite imaging and detailed analyses of soil nutrients, isotopes and spatial characteristics at ancient Neolithic herder sites in East Africa, the study offers a surprisingly simple explanation for how oval-shaped wildlife hotspots measuring about 100 meters (328 feet) in diameter evolved in a region where grasslands are naturally low in soil nutrients — manure happens.

For millions of wildebeest, zebras, gazelles and the carnivores who hunt them, migration patterns revolve around an age-old quest for the lush grasses that spring up on fertile soils after seasonal rains.

While other research has shown that fire, termite mounds and volcanic sediments may contribute to the varying fertility of savannah soils, this study confirms that ancient livestock dung has long been an important catalyst in an ongoing cycle of soil enrichment — one that continues to attract diverse wildlife to the sites of abandoned livestock corrals. 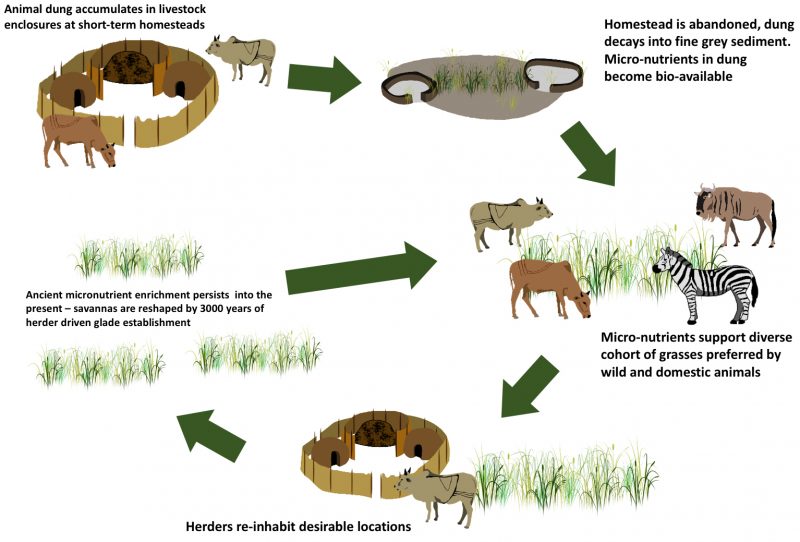 Some of Africa’s most biologically diverse wildlife hotspots can trace their origins to a cycle of soil enrichment that begins with dung deposited in the livestock corrals of ancient herdsmen. Image via Stephen Goldstein/Washington University.

For 2,000-3,000 years, savannah grasslands of southwestern Kenya were occupied by groups of nomadic herders who moved their camps often in search of greener pastures. Livestock that grazed the open savannah by day were herded into small, oval-shaped corrals within settlements at night for protection from predators and rustlers.

As manure piled up in these temporary corrals, scarce nutrients from surrounding grasslands also began to accumulate, creating fertility hotspots that attracted herds of both wild and domesticated grazers for years to come.

Thus, over the millennia, the cultural practices of mobile herders had the unintended consequence of creating spatially stable fertile environmental niches for an array of wildlife, the study contends.

While the herding activities of mobile communities of modern and historic Maasai and Turkana have been shown to enrich savannah soils, little has been known about the lasting impact of Africa’s earliest food producers, herders who moved south from the Sahara 2,000-5,000 years ago.

This study examined five Neolithic pastoral sites in southern Kenya, ranging in age from 1,550-3,700 years, and found that the sites still contain nutrient-rich sediments resulting from livestock dung deposited as far back as 3,000 years.

As compared to the surrounding savannah, ancient pastoral sites were found to have significantly higher levels of phosphorus, magnesium, calcium and other nutrients essential for plant growth and animal health and reproduction. 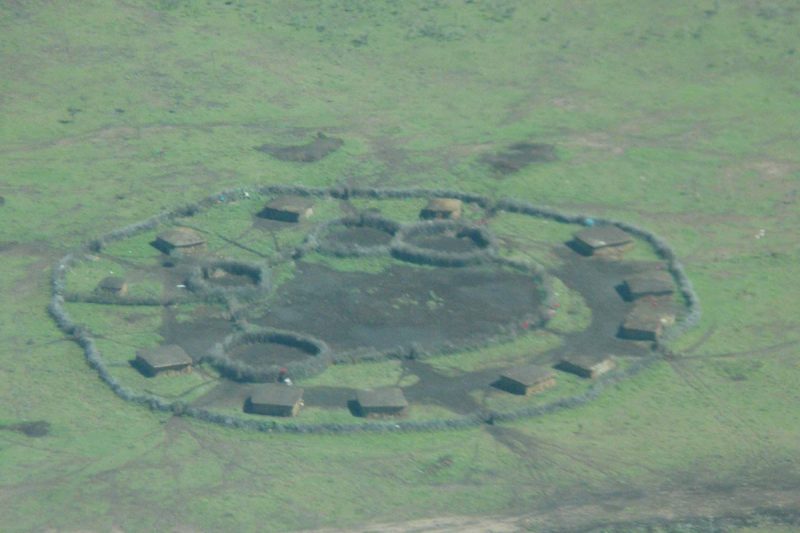 Aerial view of a modern Maasai settlement in southern Kenya shows the small oval corrals that have contributed to soil fertility in the grassland region for thousands of years. Image via Fiona Marshall.

Observed from the ground and via satellite, these ancient pastoral sites appear as treeless, open grassy patches within larger expanses of wooded savannah grasslands. Excavations show that the abandoned settlement footprints are loosely defined by a visually distinct, fine-grained layer of grey sediment, now located about a half-meter below the surface and up to a foot thick in places.

Over the millennia, the increasing fertility of these ancient settlement sites have increased the spatial and biological diversity of savannahs.

By establishing the role that the early herders played in enriching Africa’s savannah soils, this study by Marshall and colleagues in Nature offers yet more evidence for the entwined nature of human activities and other ecological influences on the landscapes in which we live.

Bottom line: According to a new study, some African wildlife hotspots owe their vitality to heaps of dung deposited over thousands of years by livestock of wandering herders.

Read more about the study from Washington University