The 2019 Atlantic hurricane season, which ended on November 30, produced 18 named storms, including 6 hurricanes, 3 of which were major (Category 3, 4 or 5).

The GOES East satellite recorded this imagery of the entire Atlantic basin. You can see storms as they form off the coast of Africa and then enter the Atlantic. The video starts at June 1, though there was a subtropical storm (Andrea) that formed in May. The first hurricane in this video (Barry) appears at 0:13 in the Gulf of Mexico.

The 2019 Atlantic hurricane season officially concluded on November 30. According to a NOAA summary, the season produced a total of 18 named storms. That includes six hurricanes, three of which – Hurricanes Dorian, Humberto, and Lorenzo – were considered “major” (Category 3, 4 or 5). An average season has 12 named storms, six hurricanes, and three major hurricanes.

The three major hurricanes this season were Dorian, Humberto and Lorenzo. Hurricane Dorian is tied with three other hurricanes — the 1935 Labor Day Hurricane, 1988’s Hurricane Gilbert and 2005’s Hurricane Wilma — as the second strongest hurricane on record in the Atlantic basin in terms of wind (185 mph).

Also this year, five tropical cyclones formed in the Gulf of Mexico, which ties a record with 2003 and 1957 for the most storms to form in that region. In all, four storms made landfall in the U.S. during the 2019 season: Barry, Imelda, Nestor and Dorian. 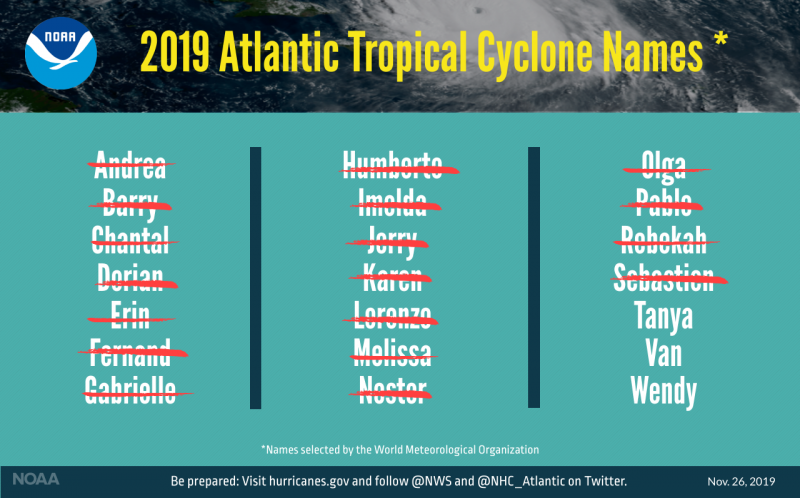 A graphic listing 2019 Atlantic tropical cyclone names selected by the World Meteorological Organization. The 18 named storms that formed are designated with a red slash through their name. How do hurricanes get their names? Image via NOAA.

The 2019 season’s activity ramped up in mid-August during the normal peak of the season, said Gerry Bell, lead seasonal hurricane forecaster at NOAA’s Climate Prediction Center. Bell said in a statement:

The above-normal activity is consistent with the ongoing high-activity era, driven largely by the Atlantic Multidecadal Oscillation, which entered a warm phase in 1995. Conditions that favored more, stronger, and longer-lasting storms this year included a stronger West African monsoon, warmer Atlantic waters, and weak vertical wind shear across the western Atlantic and Gulf of Mexico.

Satellite image from September 3, 2019. From left to right, hurricanes Fernand, Dorian, and Gabrielle in the Gulf of Mexico and Atlantic Ocean. Image via NOAA.