6.7-magnitude earthquake in Chile on January 30

The quake was said to have shaken the windows of buildings in Chile’s capital, Santiago, which was 486 kilometers (364 miles) to the south of the epicenter.

The U.S. Geological Survey (USGS) is reporting a strong 6.7-magnitude earthquake in Chile this afternoon (January 30, 2013). Reuters reports that the earthquake shook buildings “as far away as the capital, Santiago, but there were no immediate reports of damage or injuries.”

Here are the details of the event from USGS: 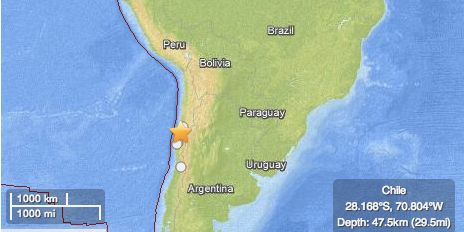 The January 30, 2013 earthquake in Chile was reported to have shaken the windows of buildings in the capital, Santiago, which was 486 kilometers (364 miles) to the south of the quake’s epicenter. Map via USGS.

Chile is on the so-called Ring of Fire, an area bordering the Pacific Ocean where earthquakes and other tectonic activity are common. Along the western edge of South America, there is a plate boundary between the Nazca plate and the South America plate. It’s where the oceanic crust and lithosphere of the Nazca plate begin their descent into the mantle beneath South America. This movement of great land plates is what causes earthquakes to happen frequently in this part of the world. On February 27, 2010, an 8.8-magnitude earthquake happened off the coast of central Chile. Its intense shaking lasting for about three minutes. The earthquake killed hundreds of people and caused billions of dollars in damages. The 2010 8.8-magnitude earthquake in Chile still ranks as the sixth-largest earthquake ever to be recorded by a seismograph.

Bottom line: A 6.7-magnitude earthquake struck in Chile on January 30, 2013. No reports of injuries or damages.