The Pacific Tsunami Warning Center did not issue a tsunami warming following the earthquake, which occurred at 2:36 a.m. Pacific Standard Time.

The U.S. Geological Survey (USGS) is reporting an undersea, 6.4-magnitude earthquake that struck 142 kilometers (88 miles) off the coast of Baja California at 10:36 UTC (2:36 a.m. PST) on Friday, December 14, 2012. The Pacific Tsunami Warning Center did not issue a tsunami warming.

Here are the details of the quake, from the USGS. 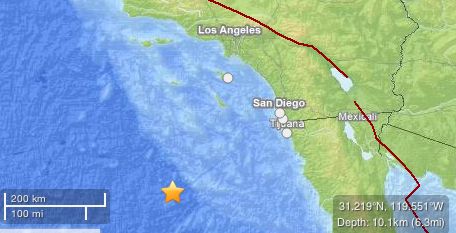 6.4-magnitude undersea earthquake off coast of Baja California on December 14, 2012 via USGS

USGS says that Mexico, which sits atop three large tectonic plates, is one of the most seismologically active regions in the world. They say:

The relative motion of these crustal plates causes frequent earthquakes and occasional volcanic eruptions. Most of the Mexican landmass is on the westward moving North American plate. The Pacific Ocean floor south of Mexico is being carried northeastward by the underlying Cocos plate. Because oceanic crust is relatively dense, when the Pacific Ocean floor encounters the lighter continental crust of the Mexican landmass, the ocean floor is subducted beneath the North American plate creating the deep Middle American trench along Mexico’s southern coast.