Pacific walrus that can’t find sea ice for resting in Arctic waters are coming ashore in record numbers on a beach in northwest Alaska. 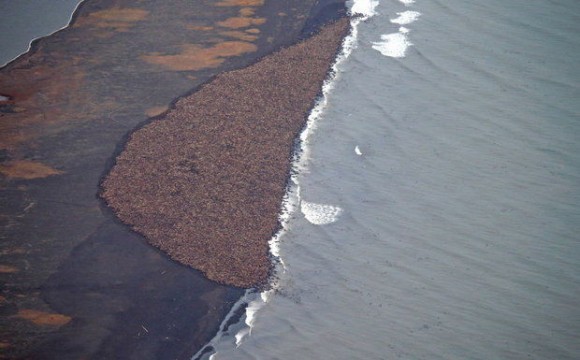 The gathering of walrus on shore is a phenomenon that has accompanied the loss of summer sea ice as the climate has warmed. The extreme retreat of Alaska’s summer sea ice has led large numbers of Pacific walrus to haul out – leave the water for sites on land – instead of resting on offshore ice.

Walrus in large numbers were first spotted on the U.S. side of the Chukchi Sea in 2007. They returned in 2009, and in 2011, scientists estimated 30,000 walrus along a one-kilometer stretch of beach. Last year, a NOAA survey counted about 10,000 walrus on the beach near Point Lay. 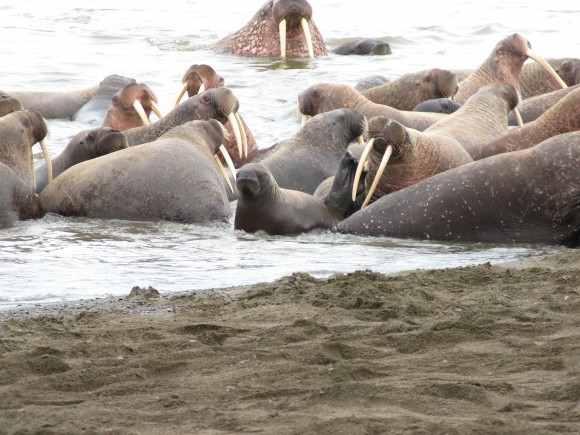 Walrus calves are more likely to be trampled in these massive land haul-outs. Photo credit: USGS

Female Pacific walrus and their calves traditionally spend summers far from shore, diving for benthic invertebrates over the shallow continental shelf waters of the Chukchi Sea. The walrus prefer to rest between forage bouts on sea ice drifting above their feeding grounds. It’s the loss of summer sea ice over the continental shelf in recent years that has forced many walrus to travel to the northwest coast of Alaska where they haul-out on shore to rest. The video below shows a large herd of walrus that hauled out near Point Lay Alaska in August, 2011.

Read more about walrus haul out from USGS