2019 ozone hole smallest since its discovery

Thanks to abnormal weather patterns in the upper atmosphere over Antarctica, this year’s ozone hole is the smallest since the ozone hole was 1st observed in 1982.

This year’s ozone hole over Antartica is the smallest since its discovery in 1982, NASA and NOAA scientists reported yesterday (October 21, 2019). The scientists said that the small size of the ozone hole is thanks to abnormal weather patterns in the upper atmosphere over Antarctica that dramatically limited ozone depletion in September and October.

According to the report, there is no identified connection between the occurrence of these unique patterns and changes in climate.

It’s great news for ozone in the Southern Hemisphere. But it’s important to recognize that what we’re seeing this year is due to warmer stratospheric temperatures. It’s not a sign that atmospheric ozone is suddenly on a fast track to recovery.

Ozone is a molecule composed of three oxygen atoms. A layer of ozone high in the atmosphere – about 9 to 18 miles (15 to 30 km) up – surrounds the entire Earth. It protects life on our planet from the harmful effects of the sun’s ultraviolet rays.

In the 1980s, scientists began to realize that ozone-depleting chemicals, such as chlorofluorocarbons (CFCs), were creating a thin spot – a hole – in the ozone layer over Antarctica.

The Antarctic ozone hole forms during the Southern Hemisphere’s late winter as the returning sun’s rays start ozone-depleting reactions. The depletion of ozone by CFCs in the atmosphere happens faster at colder temperatures and slows down as temperatures warm, so each October, the ozone layer begins to heal again for the year.

Learn how NASA and NOAA monitor the ozone hole throughout the year.

It’s a rare event that we’re still trying to understand. If the warming hadn’t happened, we’d likely be looking at a much more typical ozone hole. 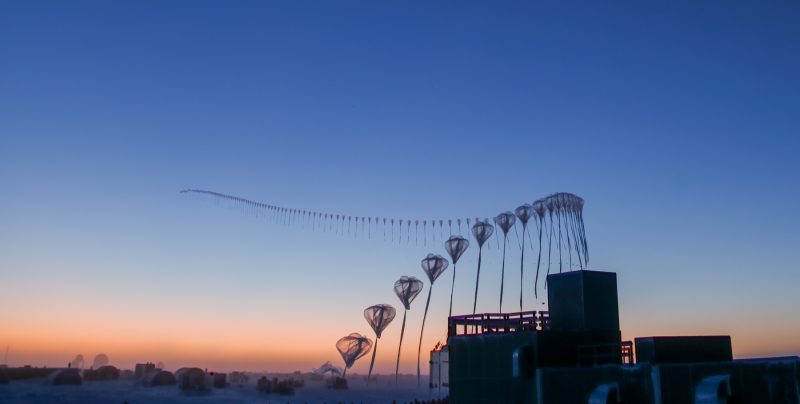 At the South Pole, NOAA scientists launch balloon-borne sensors to measure the thickness of the protective ozone layer high up in the atmosphere. This time-lapse photo from September 9, 2019, shows the flight path of a weather balloon as it rises into the atmosphere over the South Pole from the Amundsen-Scott South Pole Station. Image via Robert Schwarz/University of Minnesota.

The weather systems that disrupted the 2019 ozone hole are typically modest in September, but this year they were unusually strong, dramatically warming the Antarctic’s stratosphere during the pivotal time for ozone destruction. At an altitude of about 12 miles (20 kilometers), temperatures during September were 29 degrees F (16 degrees C) warmer than average, the warmest in the 40-year historical record for September by a wide margin. In addition, these weather systems also weakened the Antarctic polar vortex, knocking it off its normal center over the South Pole and reducing the strong September jet stream around Antarctica from a mean speed of 161 miles per hour (259 kph) to a speed of 67 miles per hour (108 kph). This slowing vortex rotation allowed air to sink in the lower stratosphere where ozone depletion occurs, where it had two impacts.

First, the sinking warmed the Antarctic lower stratosphere, minimizing the formation and persistence of the polar stratospheric clouds that are a main ingredient in the ozone-destroying process. Second, the strong weather systems brought ozone-rich air from higher latitudes elsewhere in the Southern Hemisphere to the area above the Antarctic ozone hole. These two effects led to much higher than normal ozone levels over Antarctica compared to ozone hole conditions usually present since the mid 1980s.

As of October 16, the ozone hole above Antarctica remained small but stable and is expected to gradually dissipate in the coming weeks. 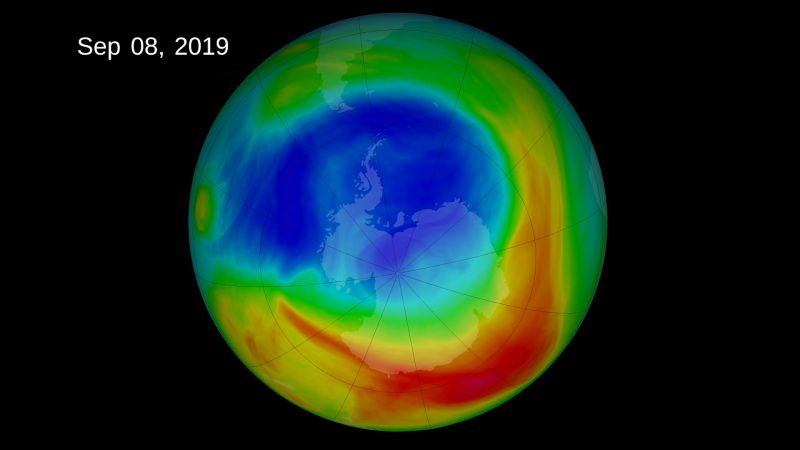 In 1987, the international community signed the Montreal Protocol on Substances that Deplete the Ozone Layer. This agreement regulated the consumption and production of ozone-depleting compounds. Atmospheric levels of human-made ozone-depleting substances increased up to the year 2000. Since then, they have slowly declined but remain high enough to produce significant ozone loss. The ozone hole over Antarctica is expected to gradually become less severe as banned CFCs continue to decline. Scientists expect the Antarctic ozone to recover back to the 1980 level around 2070.

Bottom line: The 2019 ozone hole is the smallest since it was first observed in 1982, thanks to abnormal weather patterns in the upper atmosphere over Antarctica,