The ozone hole that forms in the upper atmosphere over Antarctica each September was slightly above average size in 2018, according to NOAA and NASA scientists.

On November 2, scientists from NOAA and NASA reported that the maximum size of the 2018 ozone hole over the Antarctic was slightly above average.

According to the report, this year’s ozone hole reached an average area coverage of 8.83 million square miles (22.9 square km), almost three times the size of the contiguous United States. It ranks 13th largest out of 40 years of NASA satellite observations.

Ozone is a molecule comprised of three oxygen atoms. A layer of ozone high in the atmosphere surrounds the entire Earth. It protects life on our planet from the harmful effects of the sun’s ultraviolet rays. First detected in 1985, the ozone hole is not technically a hole where no ozone is present, but is instead a region of exceptionally depleted ozone in the stratosphere over the Antarctic. This region of depleted ozone typically begins to appear at the beginning of Southern Hemisphere spring (August–October).

The ozone hole over Antarctica reaches an annual maximum extent every year during southern winter. The depletion of ozone by chlorofluorocarbons (CFCs) in the atmosphere happens faster at colder temperatures and slows down as temperatures warm, so each October, the ozone layer begins to heal again for the year.

Scientists from NASA and NOAA track the ozone layer throughout the year and determine when the hole reaches its annual maximum extent. This year, the South Pole region of Antarctica was slightly colder than the previous few years, so the ozone hole grew larger. 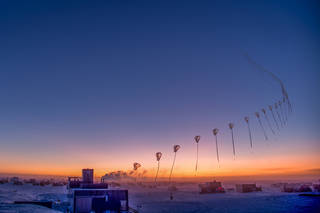 Scientists monitor the thickness of the ozone layer and its vertical distribution above the South Pole by regularly releasing weather balloons carrying ozone-measuring sensors up to 21 miles (~34 km) in altitude. This time-lapse photo from September 10, 2018, shows the flight path of a weather balloon as it rises into the atmosphere over the South Pole from the Amundsen-Scott South Pole Station. Image via Robert Schwarz/University of Minnesota.

Paul A. Newman is chief scientist for Earth Sciences at NASA’s Goddard Space Flight Center. Newman said in a statement:

Chlorine levels in the Antarctic stratosphere have fallen about 11 percent from the peak year in 2000. This year’s colder temperatures would have given us a much larger ozone hole if chlorine was still at levels we saw back in the year 2000.

Learn more about NOAA and NASA efforts to monitor ozone and ozone-depleting gases.

Bottom line: The annual ozone hole that forms in the upper atmosphere over Antarctica each September was slightly above average size in 2018.