State of the climate 2014: Record warmth

New report – released by American Meteorological Society – based on contributions from 413 scientists from 58 countries around the world. 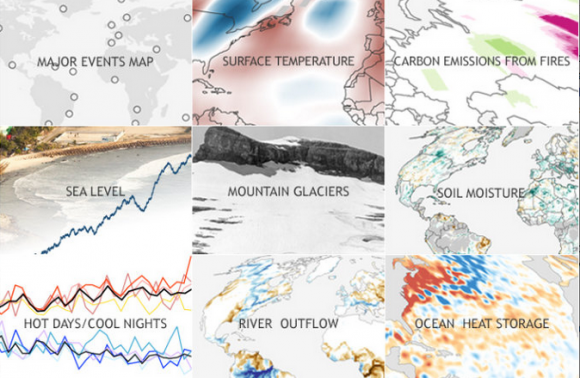 For State of the Climate in 2014 maps, images and highlights, visit Climate.gov. Image via NOAA

In 2014, the most essential indicators of Earth’s changing climate continued to reflect trends of a warming planet, with several markers, such as rising land and ocean temperature, sea levels and greenhouse gases setting new records. These key findings and others can be found in the State of the Climate in 2014 report, released online on July 16 by the American Meteorological Society (AMS). Read the full report here.

The report is based on contributions from 413 scientists from 58 countries around the world. It provides a detailed update on global climate indicators, notable weather events, and other data collected by environmental monitoring stations and instruments located on land, water, ice, and in space. The report was compiled by NOAA’s Center for Weather and Climate at the National Centers for Environmental Information.

Highlights from the report include:

Greenhouse gases continued to climb:
Major greenhouse gas concentrations, including carbon dioxide, methane and nitrous oxide, continued to rise during 2014, once again reaching historic high values. Atmospheric CO2 concentrations increased by 1.9 ppm in 2014, reaching a global average of 397.2 ppm for the year. This compares with a global average of 354.0 in 1990 when this report was first published just 25 years ago.

Sea surface temperatures were record high:
The globally averaged sea surface temperature was the highest on record. The warmth was particularly notable in the North Pacific Ocean, where temperatures are in part likely driven by a transition of the Pacific decadal oscillation – a recurring pattern of ocean-atmosphere climate variability centered in the region.

Global sea level was record high:
Global average sea level rose to a record high in 2014. This keeps pace with the 3.2 ± 0.4 mm per year trend in sea level growth observed over the past two decades.

The Antarctic showed highly variable temperature patterns; sea ice extent reached record high:
Temperature patterns across the Antarctic showed strong seasonal and regional patterns of warmer-than-normal and cooler-than-normal conditions, resulting in near-average conditions for the year for the continent as a whole. The Antarctic maximum sea ice extent reached a record high of 7.78 million square miles on September 20. This is 220,000 square miles more than the previous record of 7.56 million square miles that occurred in 2013. This was the third consecutive year of record maximum sea ice extent.

The State of the Climate in 2014 is the 25th edition in a peer-reviewed series published annually as a special supplement to the Bulletin of the American Meteorological Society. The journal makes the full report openly available online. Read it here.

Bottom line: The American Meteorological Society (AMS) released the State of the Climate in 2014 report on July 16, 2014. According to the report, in 2014, the most essential indicators of Earth’s changing climate continued to reflect trends of a warming planet, with several markers, such as rising land and ocean temperature, sea levels and greenhouse gases setting new records.