2012 set to be warmest year ever recorded in US

2012 is likely to break 1998 for the warmest year ever recorded since record keeping began in the contiguous United States.

The eastern United States saw temperatures below normal for November 2012. However, the rest of the country experienced temperatures above average. Image Credit: NOAA

For November 2012, major warmth dominated areas west of the Mississippi River with Arizona, Colorado, New Mexico, Utah, and Wyoming having November temperatures among their ten warmest. In the eastern United States, colder air from Canada dominated the region with many areas receiving cooler than average temperatures for the month of November 2012. North Carolina tied 10th coolest November on record, with a statewide-averaged temperature 3.5°F below average. November 2012 ranked as the eighth driest November on record with an average rainfall amount of 1.19 inches, which was 0.93 inches below the long-term average. The Intermountain West, the Plains, the Midwest, and along the entire East Coast experienced drier conditions than normal. Overall, the warmth in November pretty much sealed the deal for 2012 to become the warmest year ever recorded in the contiguous United States. 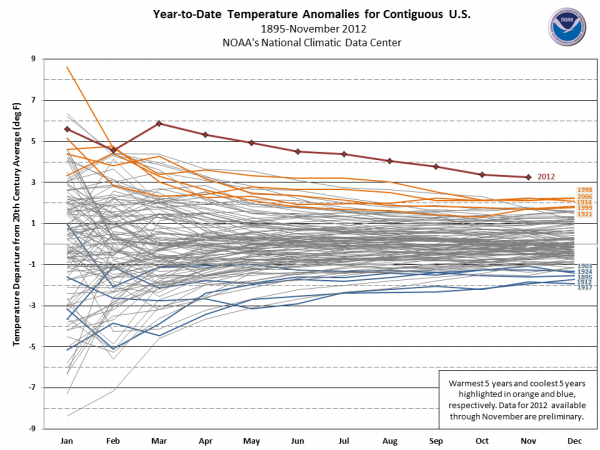 This chart ranks the temperature anomalies for the contiguous U.S. from 1895 through November 2012. 2012 is a huge outlier compared to the previous years, including 1998 which was considered the warmest year ever recorded since 1895. Image Credit: NOAA

I believe the chart above depicts exactly how warm 2012 has been for the contiguous United States. As of the end of November, temperatures have been slightly over 3°F above average. 1998, which was the warmest year ever recorded since record keeping began in 1895, had an average temperature for the contiguous U.S. of 54.32°F. 2012 is currently having an average temperature of 55.34°F. We are not only breaking 1998’s record warmth, but we are crushing 1998 by over a degree. The first half of December has already brought upon fairly warm temperatures across a large majority of the United States, and it is nearly impossible for 2012 to drop below 1998 even if the second half of December brought upon record cold temperatures. Is global warming to blame for these temperatures? To give you an idea, seven of the top ten warmest years in the contiguous U.S. have occurred in the past 15 years. There are definitely natural cycles that influence the weather patterns across the globe, but it is hard to argue that global warming did not have a role or influence with the record warmth across the country. Of course, if you ask parts of Asia or Europe about temperatures, they would argue that temperatures were below average. It is important to note that Earth likes to maintain a balance, so if one area is receiving record warmth, another area is bound to experience very cold temperatures. 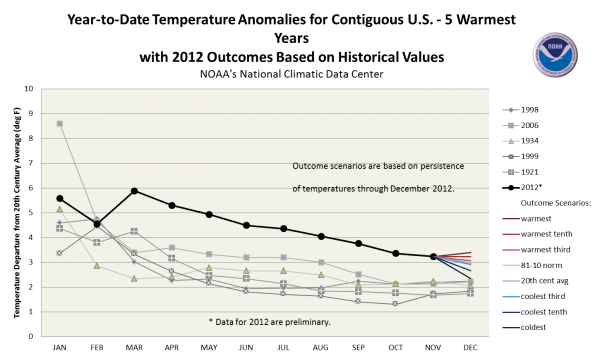 Comparison of the top five warmest years to date in the contiguous U.S. compared to January through November 2012. The 2012 line ends showing where it will end up in December assuming how cold or warm it could get by the year’s end. Image Credit: NOAA/NCDC