If you’ve never spotted an asteroid, now would be a good time to try. Vesta’s 2017 opposition is around now. Guy Ottewell provides charts and explains more. 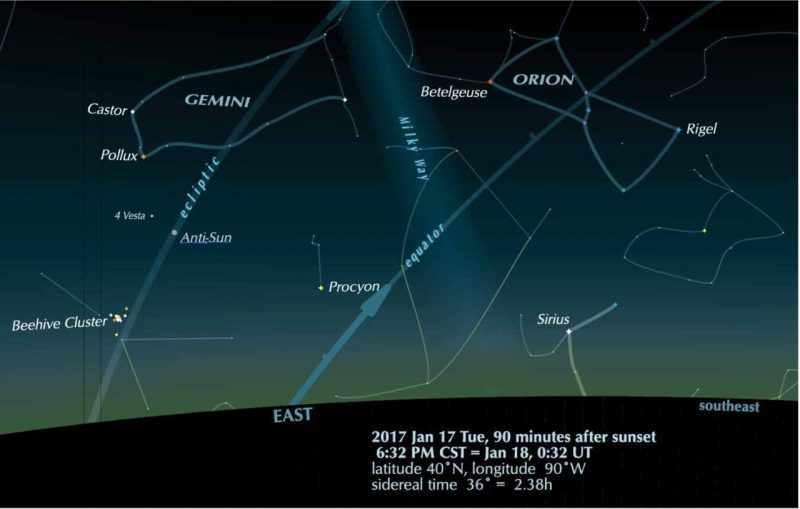 This year, the first of the major asteroids that we pass at opposition is the brightest, the only one you can possibly find with the naked eye: asteroid 4, Vesta.

Go to my Astronomical Calendar 2017 page and, in particular, the Asteroids page to see a space diagram, which shows how Earth is overtaking Vesta on the inside. A dashed line is the sight-line from Earth to Vesta at this date. Because Vesta is in the part of its orbit that is in the Gemini direction, we overtake it soon after the Northern Hemisphere’s winter solstice.

The precise date of opposition doesn’t greatly matter: it is the middle of the rough span of time when a moving body is nearest and brightest. What matters more is that the moon, with its interfering glare, was full on January 12, so it is now rising at about 10 p.m., and will rise later on following nights.

So the good time for Vesta is really the two weeks starting now. It will fade by a magnitude, but be findable with binoculars in moonless evenings.

Here is the more detailed way to find Vesta with binoculars: 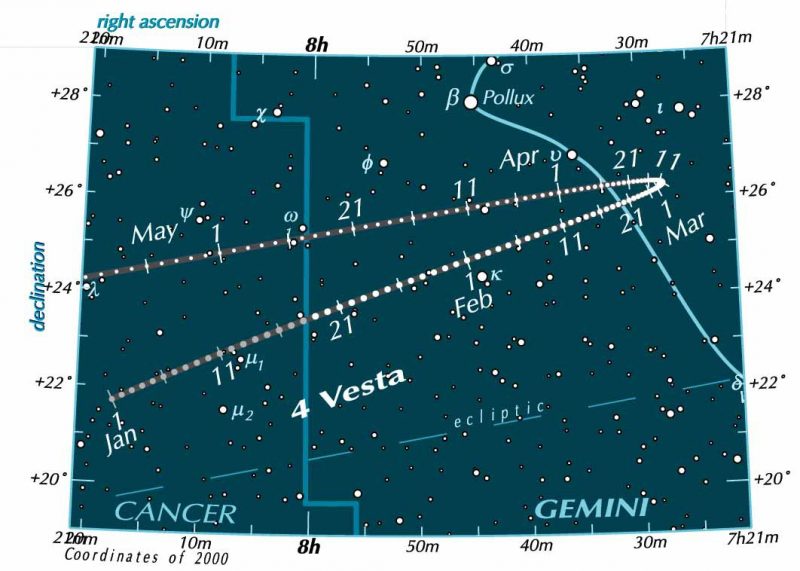 Though Vesta was only the 4th asteroid discovered (in 1807), it is the second largest (525 kilometers wide) after 1 Ceres and is the one that becomes brightest, because of being usually nearer in than Ceres and especially because of its high albedo or reflectivity: in other words, it has a light-colored surface.

At this opposition it reaches magnitude 6.3 – just at or above the limit for the naked eye with a dark clear sky.

We now know a lot more about Vesta because NASA’s Dawn spacecraft was in orbit around it from 2011 July to 2012 September. Collisions billions of years ago knocked many pieces off Vesta, and some have rained onto Earth as meteorites of a recognizable kind.

There used to be a brand of matches called Vesta; the asteroid didn’t get its name from those, but from the Roman goddess, equivalent of the Greeks’ Hestia, one of the Olympian Twelve, virgin protectress of the hearth and home.